This guide assumes you’re playing solo and only have two cable ties. It gives the best and (if applicable) second-best civilian I’d generally recommend using those ties on.

Sometimes you shouldn’t take hostages right away. Shout them to the ground but keep the cable ties off because Hostage Rescue teams will prioritize cable-tied hostages, and sometimes it’s best to wait until the objectives move you in the right direction anyway.

I generally don’t think Extra Cable Ties are needed on any heist except certain achievement runs like ‘Crowd Control’ and ‘Blood in, Blood out.’

Your first cable tie should be used on the bank manager. He’s an extremely valuable hostage because police will not try to free him, not to mention if you kill him you’ll get extra specials and more aggressive assaults.

Your second doesn’t matter as much because they’re all very difficult to keep pinned down. None of them spawn past the gates and that’s where you’ll be most of the heist. But for some reason I’ve found that if you shout down any civilians behind the tellers in the lobby without cable tying them, they’re sometimes still there even as I’m making my escape. 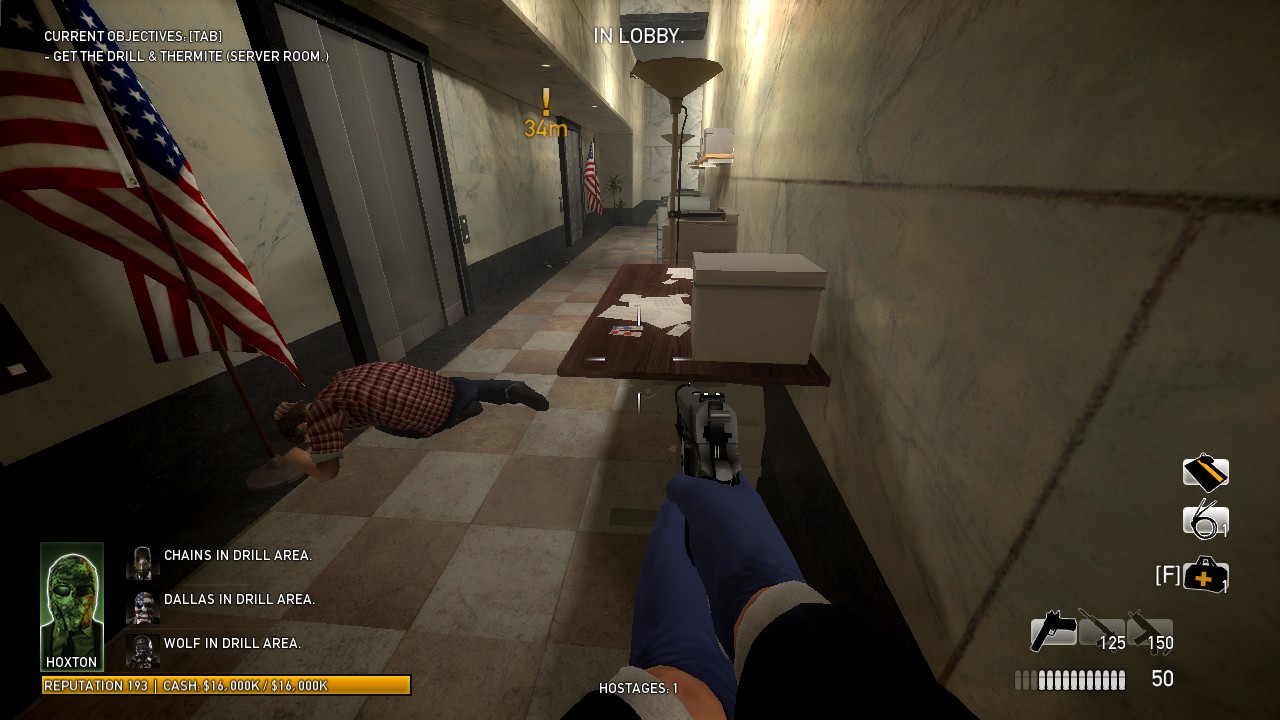 The guy in the plaid shirt modeled after Simon Viklund, shown here, is the one I find most often.

There aren’t really any “best civs” on this map because it’s all about forward movement. You’re constantly pushing forward into a brand new zone and the game loves dumping new civilians on top of you, so you really should just wait until you actually need a hostage, then just grab the closest one. 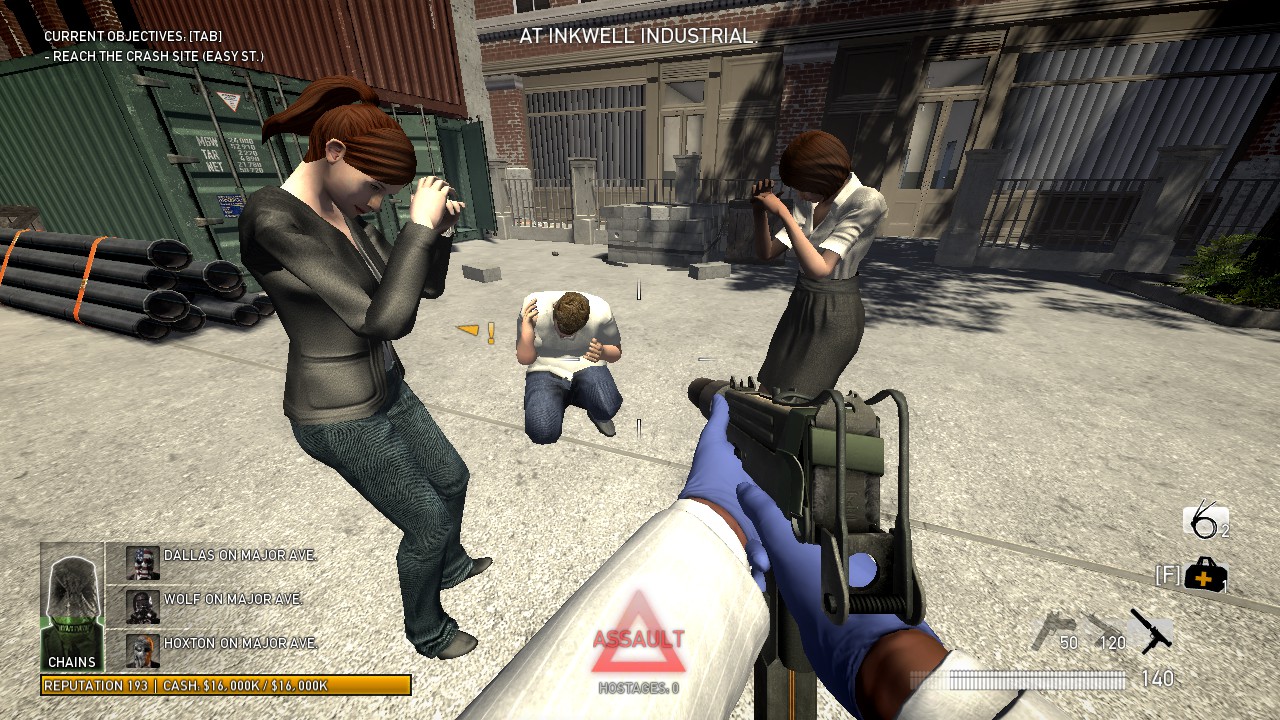 Special mention however should go to the popular strategy for surviving the first assault on the higher difficulties; everybody sprints in unison for the crash site non-stop, abandoning anyone who goes down to their fate. Once in the crash site, survivors cable tie some civs and return their allies to play before the first assault wave begins.

Your first hostage should be Chavez. Like the bank manager, he’s immune to being freed by cops so he’s very valuable.

Your second guy should be the one in the photo, on the roof. If you can shout him down while he’s at his spawnpoint on the staircase, he’s very accessible via hiding behind the chimney units while trading. But don’t cable tie him right away, just shout him to the ground and ignore him until the objectives push you onto the roof to guard him. If you cable tie him too early, FBI Hostage Rescue will make their way to the roof and probably free him while you’re still dealing with restarting saws.

Like Heat Street, Green Bridge requires so little backtracking that hostages in the early portions are a bad idea. If you absolutely must, prisoners who remain in their vans are very defensible, but you really should only take a hostage between assaults planning to trade him almost immediately. 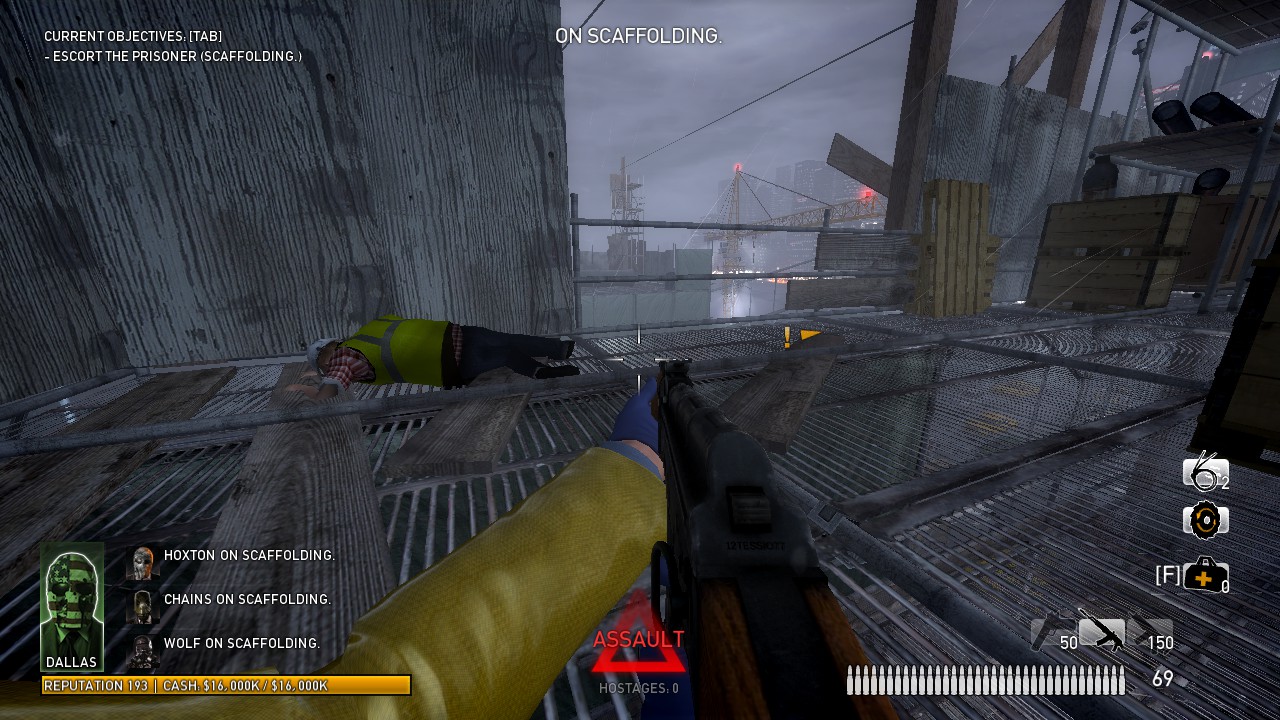 Not a big surprise, but the workers at the top of the tower are the easiest to defend, and the last available civilians you’ll get, so try to save as many ties as possible for them.

Don’t waste your cable ties on the party-goers; they’re in a horrible position far away from all the objectives. I always save mine for the civilians that sometimes spawn with either the CFO or Ralph, it takes much longer for the cops to reach them and they’re in very defensible, one-entrance rooms. 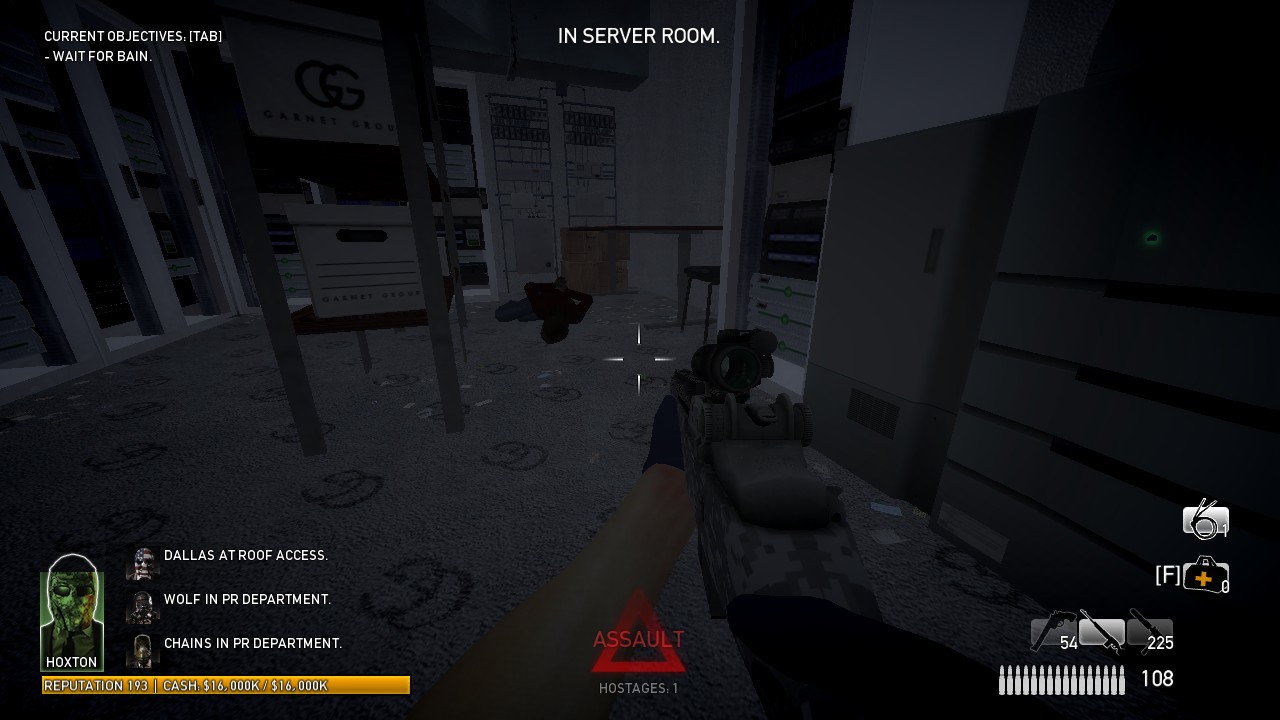 Unless going for the achievement, you shouldn’t cable tie the butchers. Too much heisting goes on in different places and it’ll be difficult to keep the cops from rescuing them. Instead, you should try to retain your ties for the second half of the heist when you reach these workers. 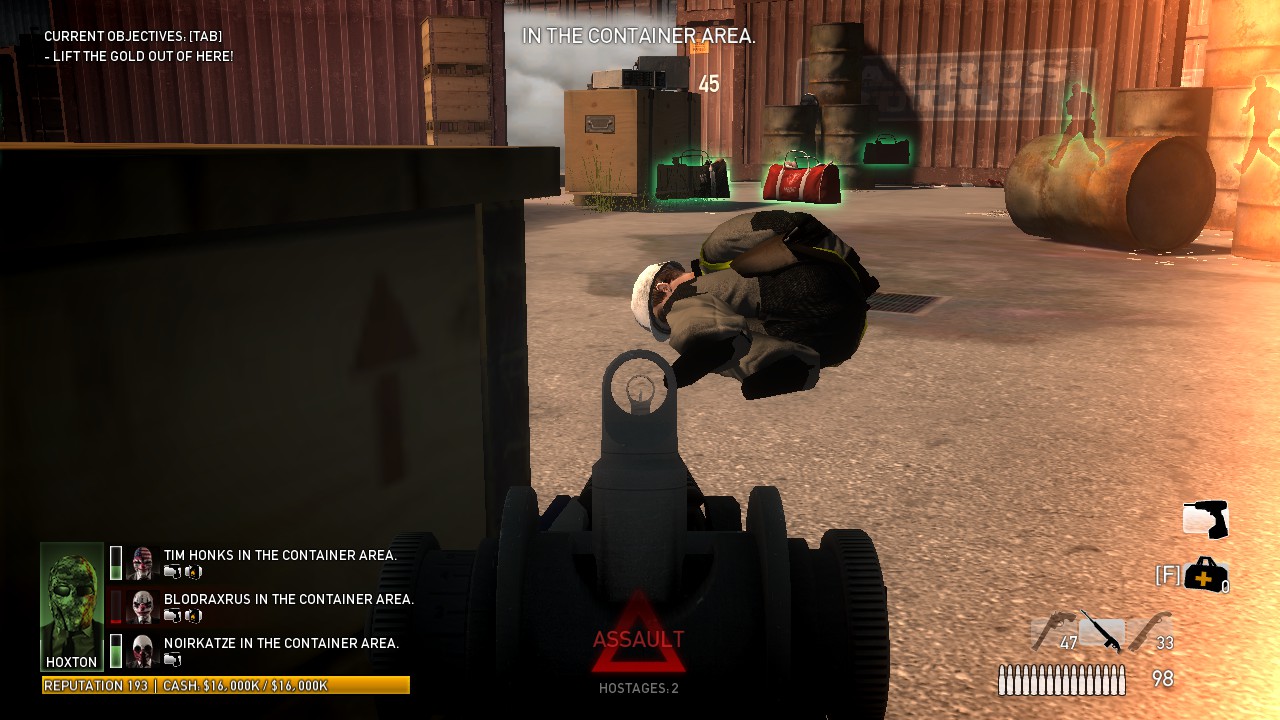 Since the second half of the heist involves camping around the containers, it’s extremely easy to defend these two workers while just staying alive.

Mitchell is the best hostage, if you wait for him to lead you into the basement before tying him down. You’ll often be hiding down there so he’s quite defensible. Second place goes to any civilian inside, preferably away from doors.

If the bikini chick spawns on Wilson’s couch, grab her. Otherwise I usually tie down the girl on her phone in Mitchell’s kitchen simply because you can guard her from the basement staircase. 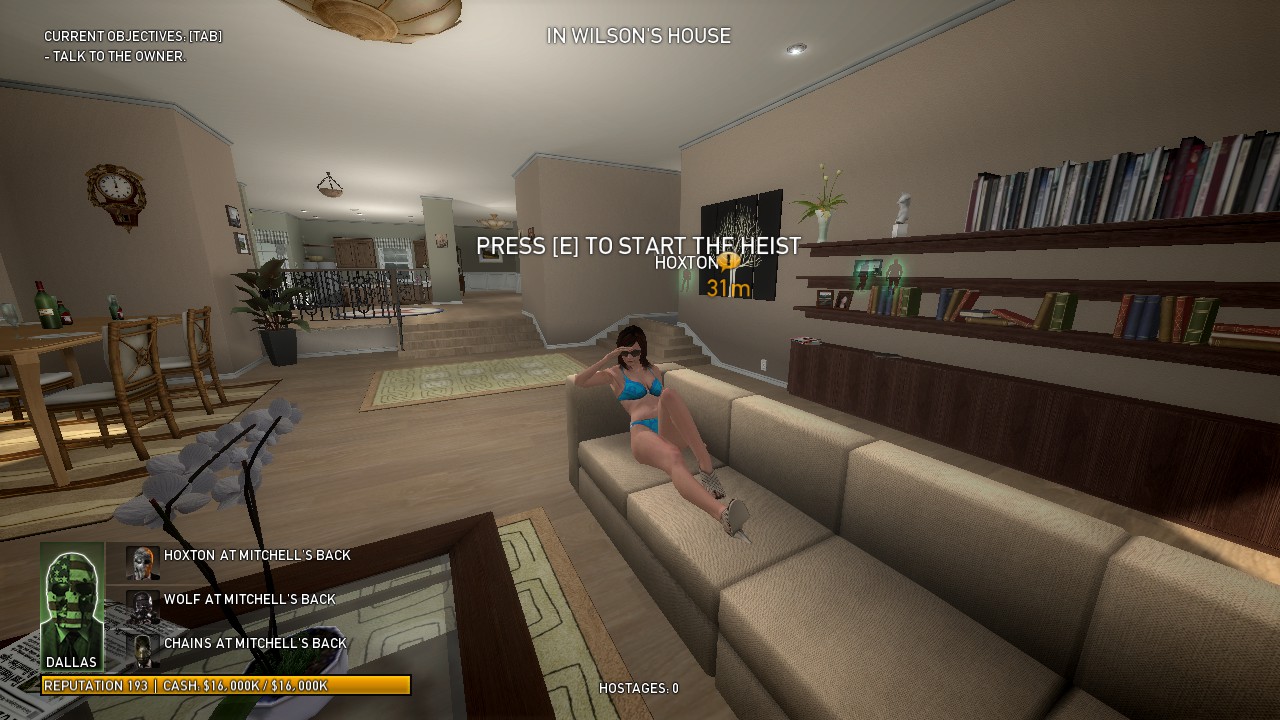 Note: Some teams choose to massacre the civilians because it makes stealth significantly easier. Up to you. 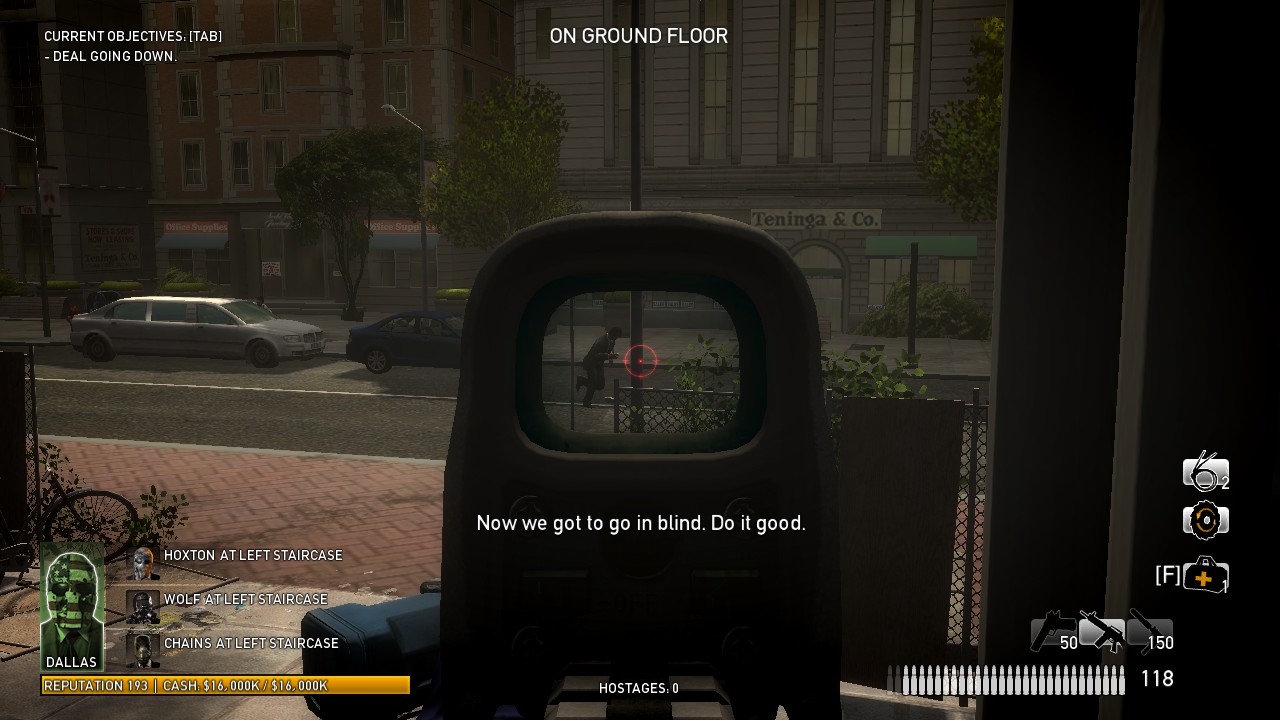 That sprinting guy’s the only civilian on the map, and he’s too far away to do anything but shoot. You’ll have to intimidate law enforcers to get hostages (or abuse invisible walls).
9. No Mercy

If you’re confident in your ability to keep the civs down, don’t use your cable ties on the civs in the Stealth portion. I know you want to, but you should be spamming shout anyway, meaning that having two civs tied down isn’t really going to make anything easier for you. Even the ones a millimeter away from the alarm. Remember you can kill the repairman without setting off the alarm. 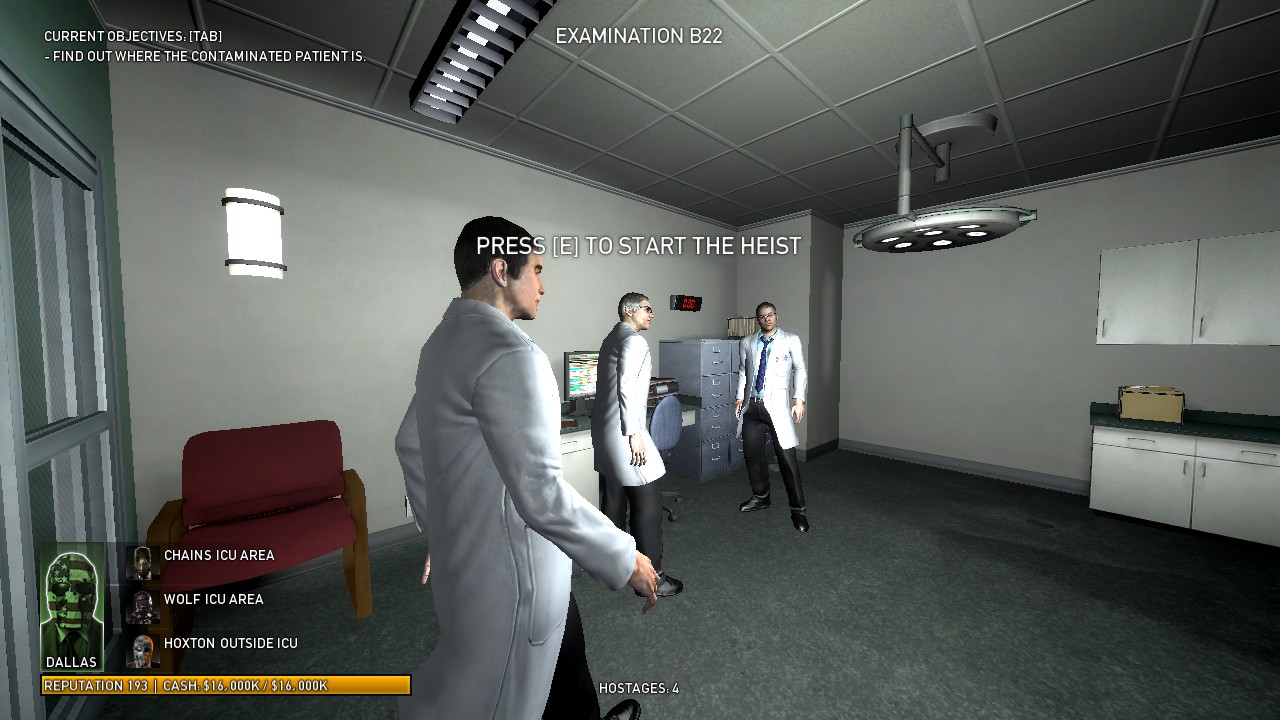 Instead, save your ties for the post-stealth section. Assuming stealth completes successfully, there will be some doctors hanging out in the far back and they’re the easiest to keep roped down. Dr. Erikson isn’t a bad choice either since she’s in the main hallway and you’re likely to keep that cleared anyway. Ultimately the extreme close quarters makes keeping any of the civilians secured extremely difficult.

The actual best hostages are the security guards on the other side of the quarantine door, especially if you can first approach them between assaults.