(Heads up, lots of butts in these screenshots. There’s only so NSFW I’m comfortable going in an article).

As you may have guessed from some of my older articles (and the code phrase from AWOL&H 2), I’m something of a fan of nude mods. Video games are an escapist pasttime after all, and I’m a total exhibitionist. My side job as a nude model for the local university can only do so much. I’m also an English major, and that means I’m woefully computer illiterate. I don’t want to admit how long it took for me to install a laughably-simple nude mod for Skyrim using the Nexus Mod Manager. So I’ve got a bias for one-step mods that require very simple installations, such as simply swapping a texture file or directly pasting the mod file in a special folder.

So after a long and healthy career of checking the internet’s supply of nude mods for whatever game’s catching my fancy currently, I’m compiling my personal favorite ones into one place. As much as I wish I could share them with you, that might be a violation of the wishes of the creators, so each one will come with instructions on how to get them yourself. Final note before we begin: I’m a shooter fan, and I write for a shooter audience. That’s obviously going to color my preferences to a large degree.

This was the first mod I ever found and used. Very easy to install, just create a folder called “dropzone” in the game files and stick any and all mods in there. However, Rico Rodriguez’ voice can be a little off-putting, so I also use the “Quiet Rico” mod that turns you into a silent protagonist. That’s admittedly a bummer because his one-liners are a great complement to the quirky B-grade action movie plot.

(Update: I delved into the modding tools and figured out how they did it, they literally just replaced some parts of the default stripper texture with transparent pixels. So I went in and did it, added the nipples, and didn’t miss some pixels they did, for imo an improved nude mod downloadable here that doesn’t use the original modder’s assets.)

This one actually increases the historical accuracy of the game for two different reasons. The first is that the default underwear for both genders is completely anachronistic, looking far more like modern undergarments than anything medieval soldiers would ever wear. The second is that there are several historical cases of cultures or armies that charged into battle fully nude. Some were motivated by religious fervor, others by the desire to unnerve their opponents by showing fearlessness, and others seeked to avoid the ease with which clothing and fabrics can infect an open wound.

Now, this is the only nude mod on this list that comes with statistical significance, since you are choosing to forgo any of M&B’s various armors, but that’s actually a niche playstyle since it gives you the best speed possible. Play multiplayer for any amount of time and you’ll soon see naked guys with greatswords who can seemingly block anything while still on the offensive. The required skill level is through the roof, however, so I usually just camp in the back and play an archer or spearman.

Instructions: The nude body comes with “The Wedding Dance“, an amazing total conversion mod on NexusMods. If you just want the nudes, you can grab the texture “man_body8c”, rename it “man_body8” and replace the original texture in C:Program Files (x86)SteamsteamappscommonMountBlade WarbandTextures . Alternately, download this which only works for female characters.

Here are the only nude mods on this list I changed significantly for my personal use. I did a lot of tweaking to make them as complete as I’d like, meaning that Zoey and Ellis come with nude HUD icons and Zoey’s even got character select pictures. You can get the originals here and here, though they’re missing everything that isn’t the model.

These are Mac-compatible and work in multiplayer. If you want to see them in-game, I’ve got an age-restricted series on Youtube where I play through my Mutation Last Man With Hordes.

Installation: Like all L4D2 mods, the installation is as easy as sticking the .vpk files into the “addons” folder.

Looking for a less typical shooter? Orcs Must Die! 2 is one of the best tower defense games on Steam, with two-player coop and a whole host of creative traps and abilities for you to wield against the bloodthirsty orc hordes. This Nexus nude mod works for the Sorceress’ default and Summertime skins, but the installation isn’t quite as easy as I’d like. The instructions will tell you to simply extract everything to the Orcs Must Die! 2 folder in your steamapps, but there were a few extra steps I needed to do before I could get it to work. The readme tells you to delete three files in the data.zip, they don’t mention it’s in data.zip->art->avatar->sorceress. After that, I had to go into the downloaded mod’s files and also paste the replacement files into data.zip->art->avatar->sorceress. Also, you’re probably gonna want to shell out the 50 skulls for the Summertime skin because the default is still wearing most of her arm, leg and breast armor.

Saints Row is in my opinion the single best series on Steam for shooter fans who want to play with nude mods. All the freedom and fun of an open-world sandbox, a great character customization system so you can literally look any way you like, and there are even mini-games requiring nudity! The games are so hilariously over-the-top that it almost feels weird to have censor blurs in the first place, considering in every other aspect Saints Row is shameless in crossing the line. Here’s links for the mods for Saints Row the Third and Saints Row IV, and the best way to get one for Saints Row 2 is to download Gentlemen of the Row, a basically mandatory fan patch that makes the buggy PC port playable. If you want to remove the mandatory smirk from the second game, here’s an awesome little mod someone made. If you want some nudist company in the third game, this mod adds Naked Oleg as a homie you can summon with your cell phone. 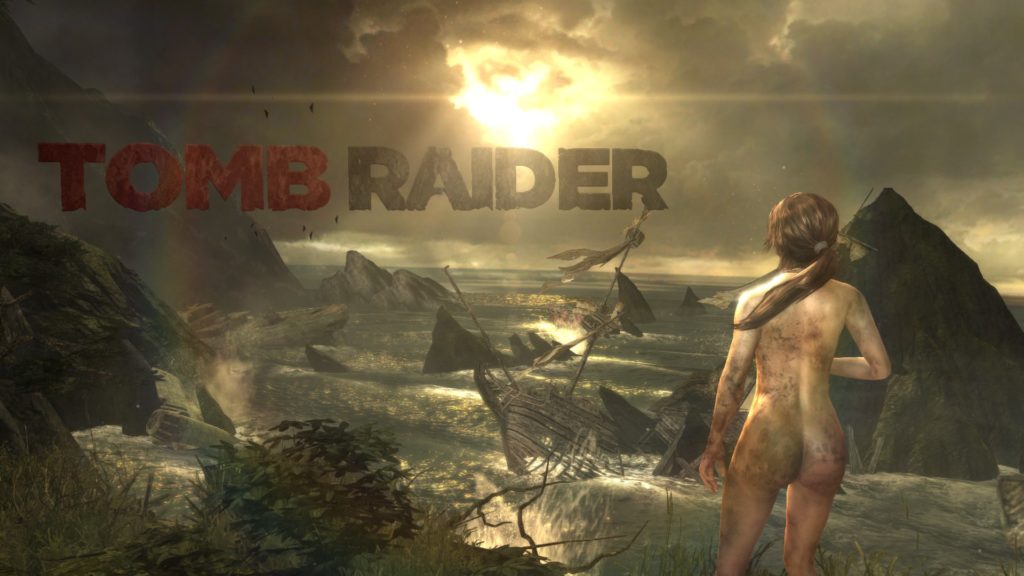 When I first played Tomb Raider a few years after it came out, I was really bummed that nobody had ever managed to create a working nude mod for it. It’s an incredible survival game with gorgeous graphics, addictive gameplay, and an immersive overall experience. Well, it took almost a decade, but someone’s finally done it! Nude Raider is an incredibly easy installation and even maintains the dirt, grime, and water effects that Lara’s body gets covered in throughout her harrowing inaugural adventure. The model looks very good and avoids warping or tearing despite the game putting it through many different camera angles. Considering how cheap this game has become, this is an easy recommend from me.

Honestly, the price tag is another advantage to all the games on this list. Each one is under 20 dollars and goes frequently on sale; I spent less than 30 dollars total for all five. Sorry about beating around the bush with providing the mods, I really wish I could just share them with y’all but permissions are a thing everyone should respect. Add me and ask if you need any help with installation. 🙂