(Heads up! These images are pixel-censored, but this is still definitely a Not-Safe-For-Work article. Please also assume that all links will be to NSFW sites)

My previous article on nude mods is one of our most popular despite a complete absence of advertising on our part. In the seven months since being published, it has consistently charted in our Top Ten Most Viewed every single day and I’d be silly to not do a follow-up. But actually, I’d have trouble writing a sequel because I don’t want to endorse any mods I haven’t personally used, and I stuck most of my favorites in the first list so this article is composed of every good nude mod that didn’t qualify for the previous article for whatever reason. I’ll make sure to mention what that reason is in the blurb, and rest assured I’ve tested each of these mods to ensure they work and, at the time of writing, the URLs to the download site are functional.

Mortal Online – I didn’t include this one for the very obvious reason that isn’t a mod! Mortal Online is one of the few MMOs that doesn’t beat around the bush and instead leaves an option right in the settings to enable full nudity instead of having lingerie superglued to the models. However, like most MMOs, the clothing provides stat and armor boosts so you’re probably not going to be able to play a full-time nude character without suffering a loss in performance, so that’s something you’ll need to consider.

The skins themselves, like most things in the game, are acceptable quality but definitely not the most visually-advanced game on the market right now. However, due to being part of the base game there are no texture bugs or visual errors, and you’ll never have to update them or anything like with most mods, as the game will do it automatically.

Skyrim – I didn’t include Skyrim in the first article because it seemed too obvious. Everybody knows Skyrim has hundreds of nude mods, and I also named-dropped Skyrim in the first article for not having particularly easy mods to install, but the second time when I needed to reinstall them due to getting a new computer, it turns out the frustrating part was the Nexus Mod Manager, and manually installing some simple model-swap skins are as easy as replacing a few files.

Obviously Skyrim mods are among the best on this list when it comes to quality, in no small part due to the amount of competition they’re up against. You probably can do a whole lot better than the Male and Female skins I use if you wanna get into the high-def, jiggle-boned, custom-animated stuff you can find at either Lover’s Lab or the Nexus. Also, once again the game doesn’t come with an unarmored build, so you’ll be missing out on some sweet magical armors if you try to play the game as a nudist, but there are several mods that add unarmored skill trees (or even nudist perks) to the game, I personally used Way of the Monk but I’d recommend against it because I was never positive it was actually working.

Killing Floor 2 – Not much of a point in posting a censored screenshot of this one, but…

This mod wasn’t in the last article because it didn’t exist yet! Lover’s Lab released this mod in mid-September of this year, which as far as I can find makes it the first nude mod released for Killing Floor 2. It’s a very simple skin that brings the Stalker up to the anatomically-correct level of her Zed brethren, nothing to really write home about but it’s still an historical milestone for KF2’s modding history.  You can also grab a Stalker nude mod for the original Killing Floor right off the Steam Workshop, and once again both mods are installed as easily as swapping out a texture file.

World of Warcraft – This one obviously didn’t make the cut because it’s not a Steam game, but my roommate loves World of Warcraft and so I’ve been playing a zombie warlock, and the nude mod is very easy to install.  World of Warcraft is currently free-to-play up to Level 20 with restrictions, and I completely suck at it so I can’t even tell you if not wearing robes is a dealbreaker for PvE. I know Demon Hunters don’t get any shirts, so you can at least play one of those topless without issue.

It’s also important to note that Blizzard has traditionally been more strict on their modding communities than Steam, and while nude mods have never explicitly been targeted for bans, they can be interpreted as in violation of a few things in that EULA. Something to be aware of. Also the male nudes are terrible due to being texture mods. 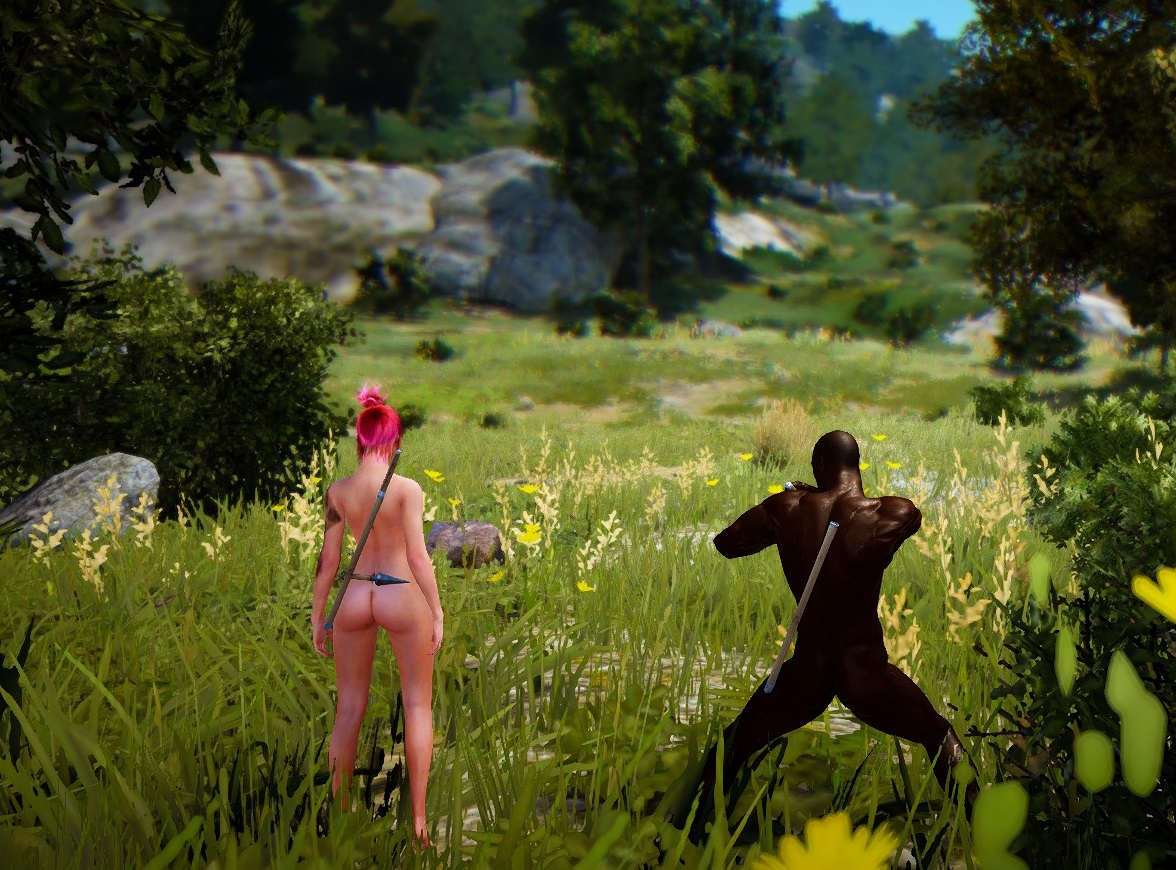 Okay okay, if you want an MMO that’s actually on Steam, I’ve recently tried Black Desert Online and it has probably one of the best nude mods on the market right now. The visuals and the textures (of both the mod and the base game) are glossy and high-def, the base game’s character customization system is extremely versatile, and the mod works for male and female characters (unless you want to turn either off; the installation exe comes with a bunch of different settings that let you choose exactly how naked you’d like your world to be.) The mod even edits the avatars’ 3D models, meaning the extra bits are fully modeled and jiggle-boned. Can’t say I was super enamored with the actual gameplay of BDO, but the nude mod itself deserves some serious kudos.

Stardew Valley – This one is pretty different from everything else on this list, which is why I omitted it from the original article, but Stardew Valley is a great game that has a thriving modding community, and the idyllic countryside setting is the perfect place to get a little closer to nature.

While you can already add content of all sorts to augment this little pixel RPG, the nude mods were one of the first things the community came out with, and by now there are enough adult mods that you can make some really, really bizarre fetish fantasies out of an otherwise straightforward farming simulator. Personally, I’m into nude mods for the exhibitionism and not the eroticism so I can’t vouch for all the kinky stuff like furniture made out of beefcakes, but if it’s got a good score on the Nexus it probably doesn’t break the game.

Resident Evil series – Resident Evil has some of the best nude mods on the internet for single-player games (or pseudo-multiplayer in the case of Resident Evil 6), and it was a series I’d attempted for a very long time to find decent mods for.

Too bad working mods were almost impossible to find. I downloaded some shady stuff from extremely sketchy sites trying to find anything that worked correctly or even came with Readme files, and for years I came away disappointed and frustrated. There are years of YouTube videos showing off mods for most of the games, but file directories have apparently changed multiple times over the years, and most of the mods I downloaded were asking me to place them in directories that didn’t exist anymore. The only place I’ve managed to find a legitimate working download is currently offline because the developer is attempting to crack down on piracy by only sharing it with people who request email access from his Google Drive.

Which is a real bummer, because Resident Evil is one of the best series on Steam for single-player nude mods, with its third-person camera, visually-flashy combat system and a community that reliably releases nude skins for both male and female characters (though the only male mods I can find all sport rock-solid erections, which is too silly even for me). SimpleSim’s mods work exactly as advertised and are pretty easy installations as well, though I noticed a fair number of shadow and seam glitches with the RE6 ones but nothing that really breaks immersion. It’s weird to have to request permission via email, but I can confirm that he does grant access to interested parties, and he has the right to control his work so I encourage downloaders to not share or post his mods without approval. Just get ahold of them while you still can.