Hello, this is aabicus with the SPUF of Legend! Doomfist finally went live today, the character everyone’s been waiting for. He’s not voiced by Terry Crews, as everyone seemed to be hoping, but thankfully the community seems okay with that because the voice actor they got just nails the character. Doomfist, as the name would suggest, is a melee-oriented Offense hero whose attacks all help him move throughout the battlefield while dealing close-range knockback+damage to foes. He’s a blast to play, but he’s got a really high skill ceiling, like Genji, just because of the reflexes and reaction times needed to survive the scrapes you’re constantly putting yourself in. The biggest change to the meta will probably be that he directly counters barriers, a change that I welcome because it’s not very fun to watch both teams whittling down barriers before a proper fight can start. 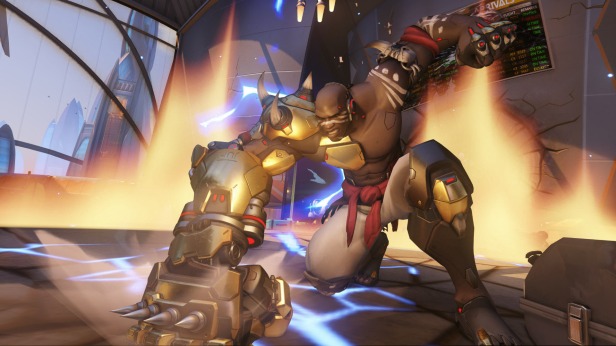 Doomfist’s ability aesthetic highlights one of the quirkier elements of Blizzard’s hero design, by which I mean that they have a number of characters that are clearly designed to emulate the standard playstyles of other specific video games. For example, McCree plays exactly like a character from Counter-Strike, with his recoil pattern and few gimmicks beyond sheer hitscan accuracy. Soldier 76 takes on more of a Call of Duty style with his low-accuracy full auto fire, and a healing field that calls to mind the ‘regenerating health’ mechanic of Medal of Honor. Lucio is very heavily based off of Jet Set Radio with his many skating tricks, and of course there are the many heroes who took inspiration from Team Fortress 2. And Doomfist feels like a character out of a fighting game. Many of his moves can be comboed with pixel-perfect timing to create deadly combos that overlap cooldowns and cancel animations, to control the pace of a 1v1 and lock your target into a feedback loop of their own destruction.

Lorewise, Doomfist adds another villain to the Overwatch roster, and he also notably is the last hero who the fanbase has been clamoring for. By which I mean, we’ve had a few memetic hero requests, and far as I know Doomfast is the last one with widespread recognition and support. When Overwatch first came out, fans were quick to find leaks and clues pointing to a support sniper hero, who we initially merged with a hacker named Sombra before Blizzard released the character as Pharah’s mother Ana, and finally there’s Doomfist. Now that we’ve finally gotten all three, the upcoming heroes should be completely unexpected characters, like Orisa. Personally, I really really hope they add more healers because Overwatch badly needs more options for us support mains. Symmetra doesn’t count so there are only four healers in the game, and Lucio and Zenyatta struggle to solo-heal, so I’ve been getting kinda tired of playing the same few classes over and over again. I understand that Blizzard’s hands were kinda tied with Doomfist, since he clearly works best as a DPS character, but we absolutely don’t need any more for the forseeable future, not as much as we need another healer.

Hope you enjoyed the gameplay, this was my very first match with Doomfist, and I don’t think any of us really knew what to do either with or against him. It didn’t help that my team went 5 DPS and me, but it all worked out in the end. Have a great day all, this is aabicus with the SPUF of Legend signing off.