There are a couple reasons I frequently finding myself grabbing Joker skills in my Payday 2 builds; firstly, they’re under the Mastermind skill tree, which also comes with all the medic skills. The top joker skill, Hostage Taker, lets you regenerate health every five seconds if you have a converted cop. This works great with most of my favorite perk decks, especially my current love Stoic, which has phenomenal tanking potential but no innate way to regenerate the slivers of damage that will slowly wear you down throughout a heist. But even when I don’t spec all the way into the top tier-skills, the ability to create new AI partners can do wonders towards patching holes your teammates are leaving in the line of defense.

The game’s never been particularly specific as to how exactly the heisters are convincing highly-trained cops to join the side of crime. Originally, the devs were going to add bomb vests to the jokered cops’ model, but they were thankfully scrapped due to not settling well with beta playtesters. The name of the skill “Partners in Crime” (and the fact that the Controller tree has a general theme of persuasion skills) implies we convinced them through bribes of money, and that’s the theory I personally prefer. My Joker absolutely deserves a cut of the profits, he put in serious work over the course of a heist.

While you can convert any police hostage to the side of crime, there are two specific variants that I always favor. The first, and by far easiest, is the Maximum Force Responder (shown above), aka those dudes with the tan body armor who show up partway through the first assault wave on all difficulties above Hard. Their chest plates are impervious to regular bullets, meaning they are surprisingly tanky, and I can frequently carry a single Jokered MFR unit through an entire heist. Most of these guys are carrying rifles, but on rare occasion you’ll spot one carrying a Reinbeck shotgun, and should consider him top priority for converting. Whether blue, green, or tan, all shotgun cops hit much harder than rifle cops due to the unusual way Payday treats its shotguns (there’s a reason Bulldozers carry them). 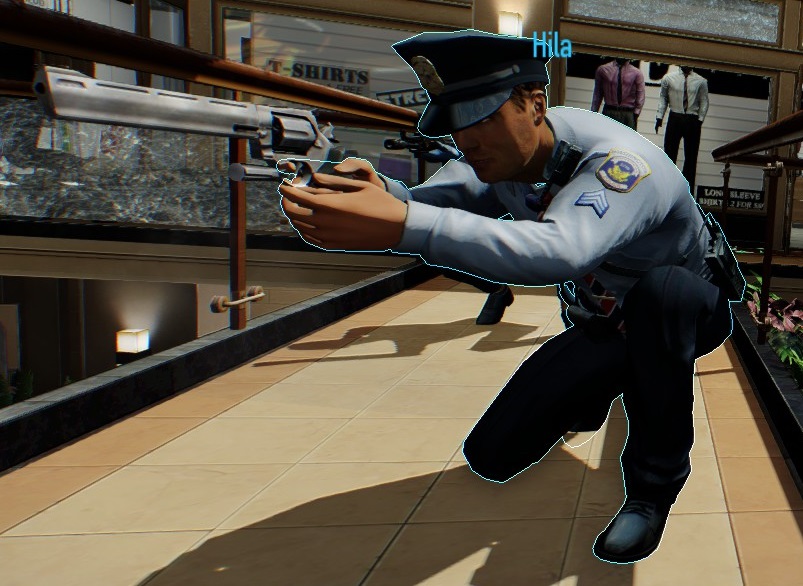 But my favorite Joker in the game is the rare Bronco cop. They only spawn in scripted sequences early on in the heist, and they have extremely low health, so it’s rare that I can get to one before my trigger-happy teammates have killed them, but his revolver is one of the hardest-hitting guns in the police force, and he (or she; the very few female officers in the game are Bronco cop reskins) will absolutely rack up an impressive body count before finally succumbing. Honestly, these guys are the sole reason I wish Payday would give me a way to heal my Joker, so I can keep a specific converted cop in the fight. As the embedded SPUF of Legend video mentions, the Tag Team perk deck can be triggered from Joker cops, but doesn’t heal them like it does player allies, and I hope Overkill eventually updates it to fix this. Alternately, the “Hostage Taker” skill could heal you and your Joker every five seconds, keeping with the spirit of the high-tier Joker skills buffing both you and your fire-forged friend.

I installed PocoHUD and bought the h3h3 DLC for the sole purpose of testing whether the new perk deck would finally let me heal Bronco Jokers. Alas.

I do find myself feeling an odd sympathy for these guys. It’s like reverse Stockholm Syndrome; I only got to spend a single heist with them, but during that time we had each other’s backs. It may have seemed harsh, but from another point of view I saved their life because without being converted, they likely wouldn’t have lasted ten more seconds against my teammates. Or maybe it’s just another example that I grow too attached to nameless NPCs. Something had to fill the hole since the Saints Row series gave up on the shock paddles.