This week started off with a bang when we got to playtest our game with a group of high schoolers from a local college. It was our first mass playtest, and we were super excited when they loved it! So far people enjoy the exhilaration of strafing gunfire while trying to decide who to heal to survive the level, simultaneously putting to rest a debate we’d been having in the sidelines. My original design document planned for the bullets in the game to be hitscan; invisible straight lines drawn from the shooter that instantly hit the first solid object that gets in the way. These are popular for games that involve lots of gunfire because the computer doesn’t need to worry about rendering the bullets (most of SPUF’s favorite shooters, from TF2 to Warframe to Overwatch, use this system). But with our playtester feedback, we’ll be committing to all guns firing physical and visible projectiles to give the player the excitement of dodging enemy fire. Luckily the top-down artstyle means we don’t need to worry about bullet drop. 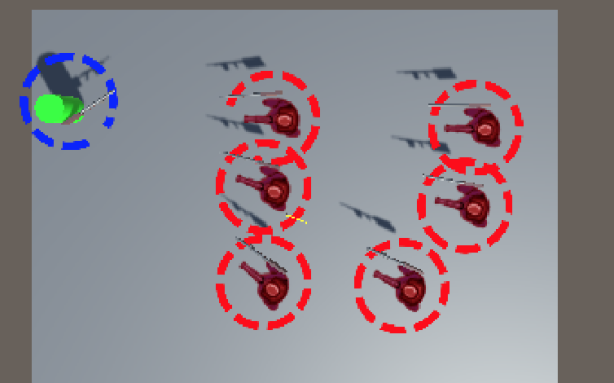 Playtesters found the green healthbars visually disruptive, so Ben slimmed them down and made them team-colored. Carry was also on bug-fixing duty all week thanks to the crazy things our playtesters found, especially a bizarre bug that was causing enemy bots to damage each other only when in this very-specific formation.

Speaking of artstyle, we radically changed up our practise map to prepare for this playtest. Rather than just a lane, we opened the battlefield up and littered it with obstacles to quickly simulate the sort of battlefields players will get to play in the final product (we also colored it green to help the units stand out visually). Some of our playtesters were getting very good with the prototype and wanted to try larger battles, and that was when we learned that our AI could now support battles of larger than 5 units per team!

Also visible in this GIF are a few quality-of-life mechanics Pat finished in time for our first playtest. The screen now flashes when the player takes damage, and the game brings up a Restart button when the player loses, to encourage quickly trying again.

We’ve honestly been rather surprised at how fun our game is when handling large amounts of units per team, considering we were originally planning on keeping things limited to 5v5. Smaller teamcounts encourage tactical target focusing and keeps each level feeling like a puzzle that player can fully wrap their head around, and this distinction will become even more apparent as we add more AI behaviors and weapon types to differentiate the units on the field. But that being said, we now have another angle to approach as we look for gameplay varieties further down the line.

I briefly mentioned AI behaviors already, but I thought an illustration might help explain how we’ve chosen to tackle the matter. Here’s an example of the solid-state machine we’re currently using to determine what an AI does at any given moment:

While in ‘Idle’, the AI attempts to find targets using the perception methods I detailed last week. If it doesn’t see anybody, it’ll move to new parts of the battlefield until it sees an enemy. Once the AI has spotted a target, it’ll transition to either Fire (if the target is in his weapon’s effective range) or Chase (wherupon the bot will attempt to move to his gun’s effective range). We are currently working on additional states that can override the bots’ behavior to display additional behaviors, such as taking cover while under fire or outright retreating when at low health.

Solid-state machines are used in all sorts of situations where we need to toggle between different non-overlapping states. For example, Ben created this solid-state machine for player animations. It keeps track of the player’s actions and displays the proper sprite animation depending on what the player is doing!

And last but not least, there’s been an exciting update on our sound design! Our college will be cooperating with the students at San Francisco State so that every team gets a dedicated audio designer, and we’ll be meeting ours for the first time next Thursday. As our weapon roster expands, it’ll become important that each firearms stands out, and sound feedback is especially important in a top-down environment, where the art can only do so much to differentiate the guns’ visual appearance. We’re committed to each gun having unique firing and reloading sounds, and we’re looking into something to overlay on top of the player’s shots so that it ‘sounds’ like a healing bullet. We’ll have more to tell you on this front after that meeting next week. See you then!