Back when Pokemon GO first came out, my younger brother Jake (the airsoft guy) bought into the hype and we played together all the time. It was awesome; we’d hike down to the local park, sweep out gyms and warn each other when something rare popped up on the radar. He gave the game up at around the same time everyone else did. But when he recently learned that I still play, he granted me permission to look through his old account and trade out whatever Pokemon I might want. He had all sorts of cool things with ancient legacy moves, but the real kicker was this beauty: 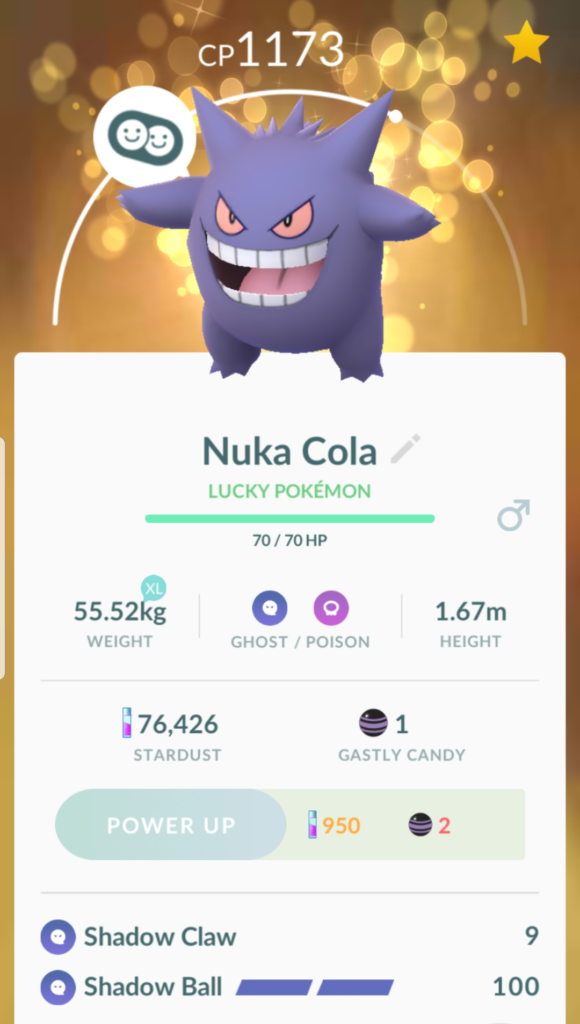 Legacy moves in Pokemon GO are ones that Niantic have removed from a Pokemon species’ movepool. You can no longer obtain them from catching or evolving new Pokemon, so you either had to be lucky enough to already own one or (with the recent update) trade them with others. Most legacy moves were axed due to being terrible, but a few were just too powerful. Here are 5 Pokemon any enterprising trainer would want:

1. Shadow Claw Gengar – Let’s start things off with the Pokemon that spurred this article’s creation. Shadow Claw Gengar is the ultimate glass cannon in Pokemon GO, capable of dealing a truly insane damage output before being quickly killed. This is largely thanks to Shadow Claw, which hits fast, hard, and generates a lot of energy for the charged move. Niantic replaced this move in Gengar’s pool with Hex, a weaker Ghost-type move that is still respectable for a fast move, but it doesn’t hit like a truck. 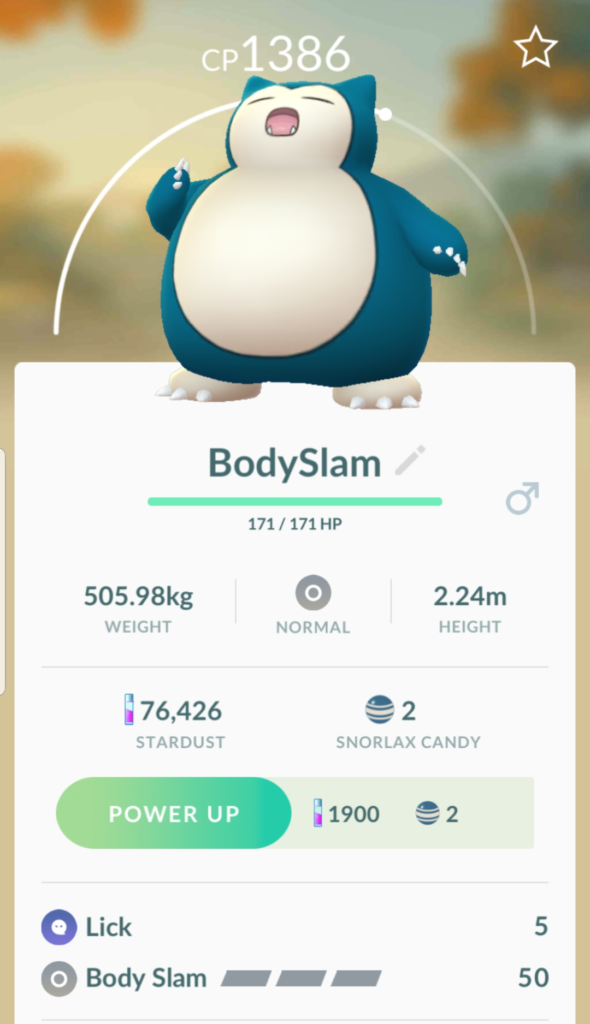 2. Body Slam Snorlax – If Gengar is one of the scariest offensive threats in the game, Snorlax sits firmly on the other side of the battlefield as one of the Big 3 Defenders in the current meta. Along with Blissey and Chansey, Snorlax is a mainstay to defend gyms, his primary downside being his lackluster charge moves that either take forever to power or are very easy to dodge. Body Slam, as a three-bar move, is far and away the best defensive option. Your defending Snorlax will be spamming those body slams so rapidly that you’re guaranteed to remove a healthy chunk of your attacker’s health bar by the time they eventually whittle you away. This move was so meta-relevant that it’s the only legacy move Niantic briefly brought back; for one month it was possible to obtain Body Slam Snorlax if you played every day for a full week in July 2018. 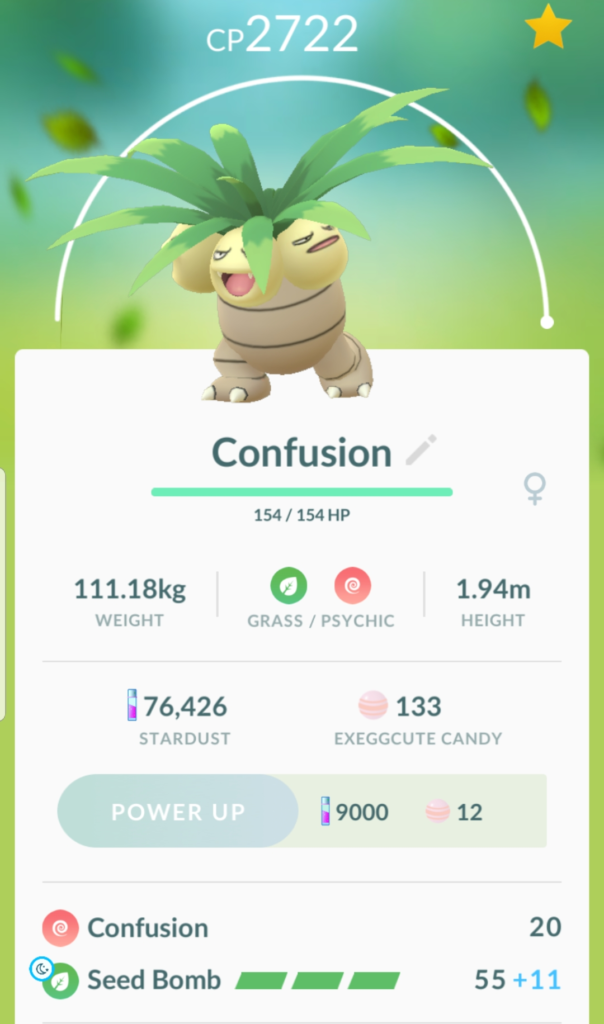 3. Confusion Exeggutor – Confusion is another fast attack that Niantic transparently replaced with a nerfed version. Modern Exeggutors have to deal with Extrasensory if they want a Psychic-type fast move, which is not nearly as quick to generate energy for the charged move. I like to pair Confusion with Seed Bomb since I can almost immediately charge the move up and deal a continuous blend of Psychic and Grass damage, but you can also go with the powerful Solar Beam or Psychic to take advantage of how rapidly you’ll fill their long charge meters. 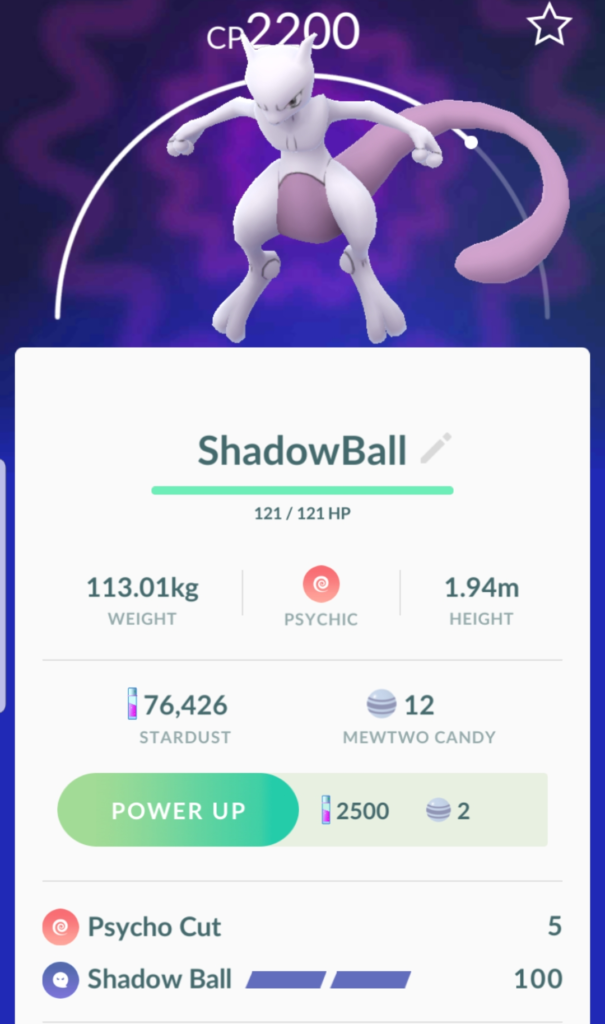 4. Shadow Ball Mewtwo – Shadow Ball Mewtwo is currently the best generalist in the entire game. It’s so important to the meta that Niantic warned everyone two months before they removed it and replaced it with a bunch of elemental options that force players to specialize against certain enemies. Only Shadow Ball Mewtwos are blanketly powerful against anything you might throw them up against. Confusion is the best fast move for dealing the most DPS, but some trainers (like myself) prefer Psycho Cut for generating energy faster and making it very easy to dodge enemy attacks. 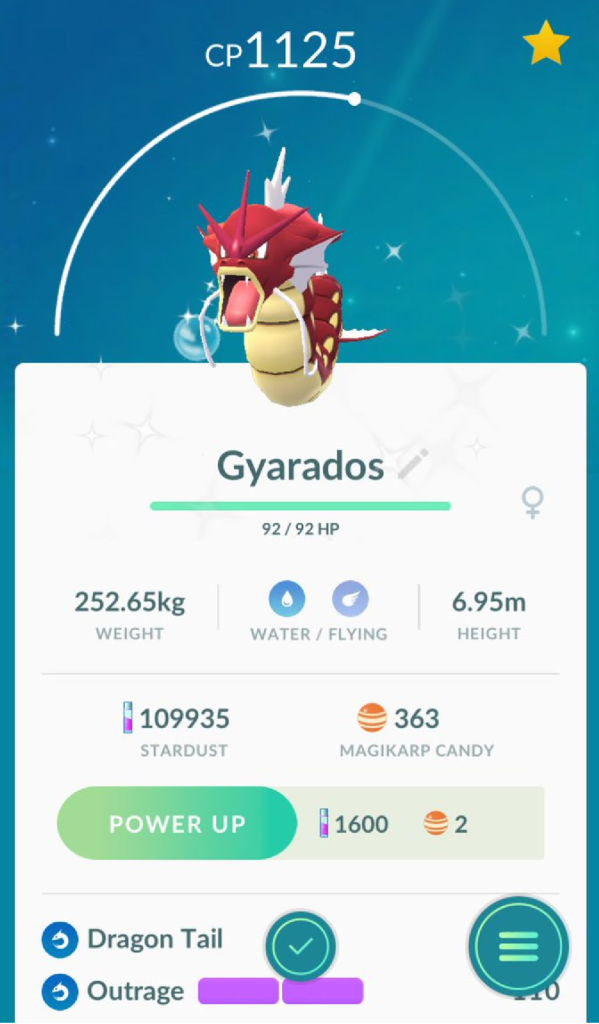 5. Dragon Tail Gyarados – This is the only Pokemon on this list I don’t personally own, so I had to get the pic from the internet, but Dragon Tail Gyarados is the only way to spec your Gyarados out as a unique Dragon-type attacker. Due to having different strengths and resistances than a normal Dragon-type Pokemon, this is a great way to deal Dragon-type damage to a Pokemon who’d normally have the upper hand against a Dragon-type. It’s also the best moveset against Electric types, Gyarados’ primary weakness. Without Dragon Tail, you’re better off using a more typical Waterfall+Hydro Pump moveset. 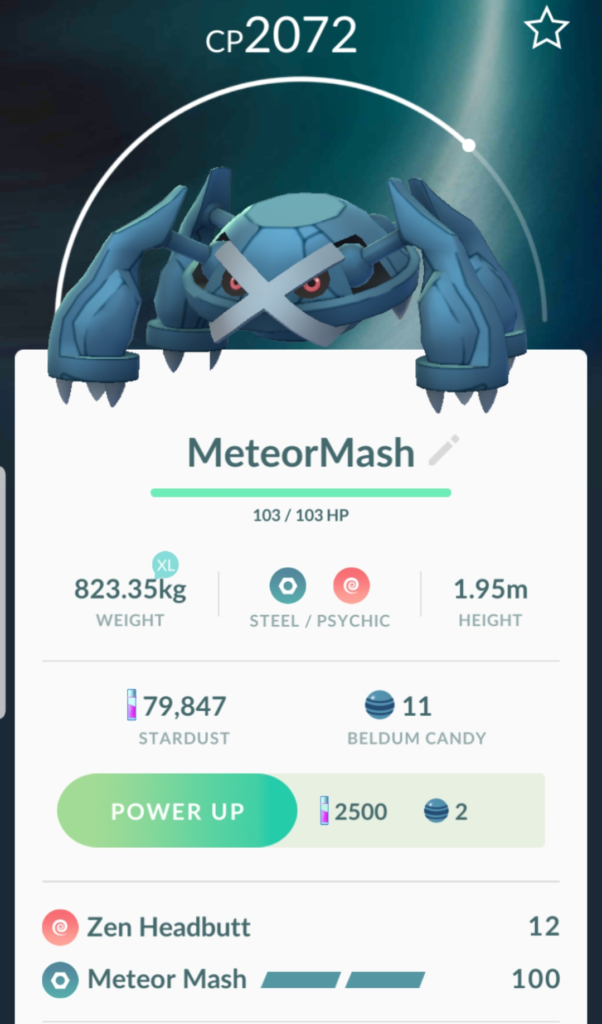 Honorable mention goes to Meteor Mash Metagross, by far the easiest Pokemon to get on this list. Metagross’ pre-evolution Beldum was the focus of October’s recent Community Day, and any Beldum who were fully-evolved on that day received this limited-edition charged move that people are predicting will make Metagross the most powerful non-legendary generalist available. By combining Psychic (a powerful offensive type) with Steel (a powerful defensive type), Metagross balances great coverage with a high attack stat, and this two-bar steel type move completes the picture. And the best news is, you may shortly be getting another opportunity to obtain this move: Niantic has announced an upcoming replacement Beldum Community Day to compensate for massive network errors ruining most of the previous one in the Japan/Asian region. There’s no way to know if this offer extends to the whole world or just that region, but either way you should trade for one of these Metagross as soon as you can. It’ll never be easier!