I had the exciting opportunity in college to give a lecture to a class of my fellow college students, and it was only afterwards that I realized my voice-acting hobby was largely responsible for how easy this presentation was!

Full disclosure: I’m not a professional voice-actor, and I don’t have the qualifications to teach you how to get paid to voice-act. This article is mostly describing the many fun reasons a voice-acting hobby can broaden your horizons and genuinely improve your life. I’ve been voice-acting for a few years, ever since deciding that the Daily SPUF needed to expand into videos. My earliest videos were commentary-free because I was too scared to use my voice, but after consistently receiving feedback that my videos would be more entertaining with voiceovers, I took the plunge. I didn’t realize at the time that I was learning how to control my speech and maintain a level tone throughout a monologue, which has drastically improved my general conversation skills. I don’t fear public speaking any more!

There are two types of tips in this article, listed in the order I think they should be tackled. The first type discusses my recommended steps to ease into the hobby, and the second is more general advice for a beginning voice-actor.

1. Master normal-sounding speech first. A common mistake made by new voice-actors is to try and mimic their favorite fictional characters or celebrities as a gateway into the hobby. While there’s nothing wrong with trying to sound like Elvis or Gollum, such impersonations aren’t teaching you much about how to voice-act. Far more important are the basics about normal speaking; the everyday casual conversational tone that 90% of human speech uses. The funny, crazy stuff comes later, and is still derived out of the basics you learn while controlling normal speech. The best way to learn the basics, in my opinion, is to:

2. Create a YouTube channel or Podcast and set a schedule. I believe strongly that committed schedules are the best way to learn anything. From its inception in 2013, The Daily SPUF updated a new article every day because I wanted to learn how to write articles, and I knew that if I gave myself off-days the whole site would probably die due to procrastination. The SPUF of Legend updates weekly for the same reason.

You don’t need to promote your channel, show it to anyone, or attach your preferred online identity to it. Its only purpose is to get you comfortable speaking into a microphone, and teach you the steps required to migrate your sound files from your computer into a completed product. I personally recommend YouTube over a podcast because you’ll also learn some nice video editing skills, even if you’re just working in Windows Movie Maker/iMovie. Once you’ve made a few videos and are comfortable with the process behind creating them, it’s time to learn how to clean up your sound files!

3. Buy a pop filter for your mic. A pop filter is a foam screen that either goes in front of or around your microphone. It blocks air from traveling over your microphone, usually air from your mouth as you breathe or say letters like P, H, or X (0:09 in this old video of mine is an example of audio not using a pop filter). My first pop filter was a sock, but you’ll eventually want something tailor-made for the job. They’re on Amazon for less than six dollars! 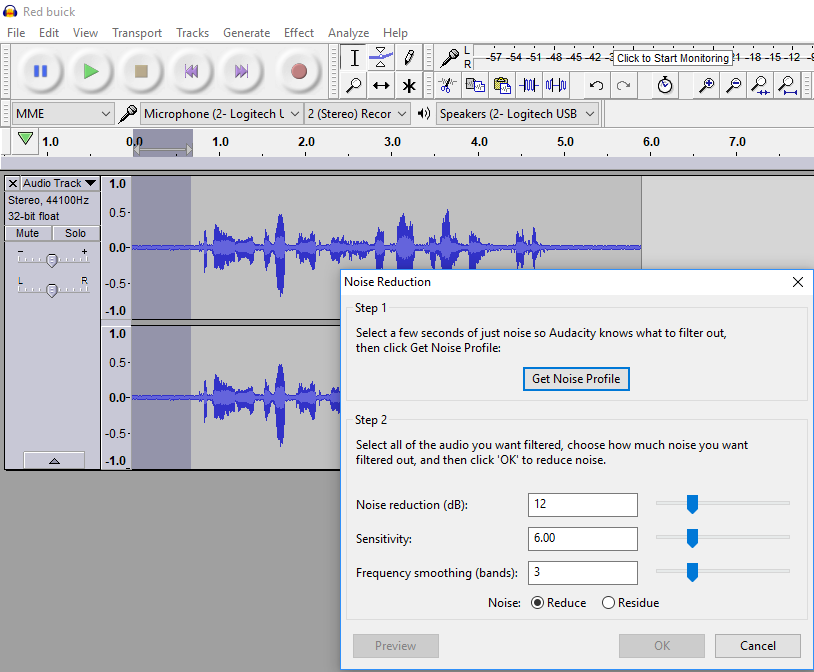 4. Learn the ‘Noise Reduction’ function in Audacity. I recommend Audacity for your first recording software. It’s very easy to use and comes with all sorts of powerful features for touching up your sound files. The most useful by far is ‘Noise Reduction’. Listen to this sound file. Do you hear that low humming noise in the background? That’s my microphone picking up my computer humming, and it’s not something you want in the final track. ‘Noise Reduction’ gets rid of that, and it’s really easy! Just highlight a portion of the audio that only contains noise, go to Effect->Noise Reduction and click “Get Noise Profile.” Now that Audacity has an idea of the sound waves you don’t want, highlight your entire track, click again on Effect->Noise Reduction and choose ‘OK’. Now your audio is noise-free!

You should definitely poke through the Audacity Effects tab and see all the cool filters you can run your audio through. I make heavy use of the ‘telephone voice’ in my game dialogue, such as when I voiced a telephone-only character in The Calls.

5. Strive to eliminate buffer sounds from your speech. I’m referring to filler sounds like ‘Uhhh’, ‘Umm’ or ‘Errr.’ I like to call these buffer sounds because, much like a computer loading something new to display, they’re noises our brain is telling us to make while we think of something else to say. The term ‘buffer sound’ also makes them sound unnatural, like something humans shouldn’t do. Because they aren’t! A silent pause is infinitely better on the ear, so you need to fight your instinct and just stay silent while your brain figures out what to say next. You may be immensely aware of yourself while pausing mid-speech, but audience members will not notice a silence of less than two seconds, even if it’s in the middle of a sentence. The YouTube channel helps immensely with this step because you’ll inevitably create an audio track that just has too many buffer sounds, and will either have to manually edit each one out in Audacity (I’ve done this, it’s terrible) or re-record the audio. Either of these gives you more practice and motivation to avoid buffer sounds next time!

6. Volunteer to voice-act for other projects. After you’ve voice-acted for yourself a while, your online friends are another great avenue to learn the ins-and-outs of voice-acting. We all know people online who are creating cool things, and it’s rare that they have a lot of voice-actors at their disposal, especially ones willing to work for free. This will force you to work outside your comfort zone, matching your voice to what someone else wants. Anything requiring a standard narrator is a very easy, low-stress beginner project, such as the Speedrunner Tools Tutorial I did for PCI Gaming. Plus it bolsters your portfolio, which will help you get new gigs down the line.

And that’s it! Voice-acting really isn’t that hard to do, it just takes practice. And confidence, but you’ll gain that for free the longer you do it. Just remember that nobody thinks their own voice sounds normal through a microphone and to everyone else’s ears, you sound great. Feel free to contact me on Steam or this blog if you have any questions or want any more advice!