I previously covered PUBG and Fortnite on this channel, and you may have noticed neither of them stuck around for very long because I just couldn’t get into them. To be honest, I’ve never been a fan of the Battle Royale genre in general, but Apex Legends is seriously the first Battle Royale game that I’m finding legitimately fun on its own merits and I’m amazed that I can’t wait to start playing it even from the moment I’ve turned it off for the night. The developers have looked at all the things that usually make Battle Royales boring and streamlined the experience so people of any skill level can enjoy themselves.

Because I will be the first to admit that I’m not the greatest player. I am a career support main who prefers healing teammates over shooting enemies, and now I can finally play support in a Battle Royale squad. Even Realm Royale didn’t have a healer class!

Speaking of Realm Royale, it’s probably the most similar Battle Royale game in design to Apex Legends, especially considering they both removed fall damage, though seeing as how Realm Royale recently removed its class system and continues to be made by Hi-Rez, a game company who cannot stop ruining every game they update, I think Apex Legends is a much safer title to get invested in. The Titanfall mechanics make movement fluid and always give the player options to choose how to tackle the environment, and the weapon attachments will automatically sort themselves onto available firearms, even switching to your new gun when you pick one up off the ground. I love how the guns all come with dynamic reticules showcasing your remaining magazine, and the characters will all engage in helpful chatter to keep the team alerted about the circle. The ping system is nuanced and refreshingly easy, I haven’t played any other game that does more to alleviate the problems of having a squad that won’t use voicechat.

On the other side of the coin, the best players in the game will love the banners broadcasting their glory across the entire map, which also subtly nerfs them because their opponents might then recognize them and treat them with appropriate care. I know some people might be mad that there’s no Solo or Duo game mode, and they’ll probably end up caving and adding one, but the Squad gameplay feels appropriate since the character classes are designed to fill holes in a team, not to go running off solo. I love the jumpmaster mechanic that forces the squad to parachute down to the same place together. 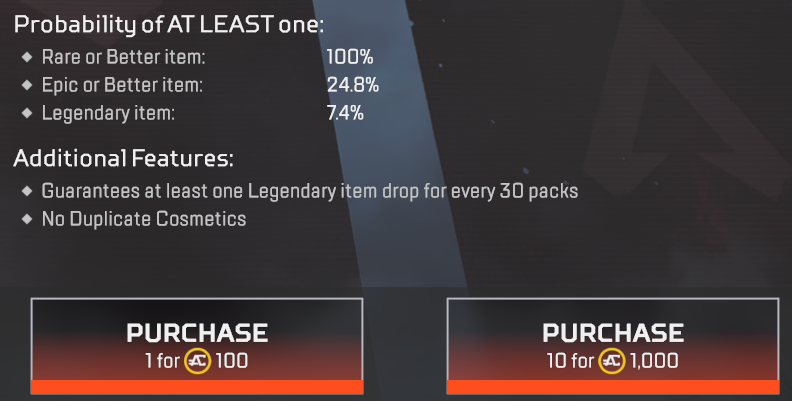 There are so many good design decisions in this game, and I haven’t even gone into the business model. I know this sounds weird to say, but for once we have an EA game whose microtransaction system isn’t even remotely predatory! The loot boxes are cosmetic, you get them after every level-up and you’re guaranteed a legendary drop after every 30 lootboxes. Take notes Overwatch! The one thing I’m worried about is that they won’t be able to make enough money with the current monetization system due to it being largely ignorable, but I think if they just add a Battle Pass they can get around that. It’s definitely worked for other games in the genre.

Well I hope those of you who’ve tried it are enjoying Apex Legends as much as I have, this is aabicus with the SPUF of Legend and I’ll see you in the arena!