A non-gaming friend got me TF2 Monopoly for my birthday last year, and it’s been sitting on my shelf ever since. I’ve been meaning to review it for a while now, but my heart wasn’t really in it because I pretty much just expected a cash grab where they renamed the properties after maps and added some custom playing pieces. Plus I unfortunately don’t live in a situation where I can convince my friends to play board games with me unless I can lure them in with promises of getting to shoot or stab each other. However, I’m glad Retro Week is finally spurring me to blow the dust off the plastic wrap and bust this game out for a review because (spoiler alert!) it’s production value honestly exceeded my expectations.

From the top, let’s look over Team Fortress 2‘s addition to the burgeoning custom Monopoly market.

First of all, the production value of the game pieces are solid, and everything feels up to standard Monopoly fare. (My parents for whatever reason love collecting Monopoly sets, and I’ve seen some pretty shoddy ones in my day like Monsters Inc and Newportopoly.) The developers surprised me with the extent they found TF2 parallels for various game mechanics and opportunities they could have easily missed. Houses, for example, are now red “barns”, and hotels are now blue “factories”, which even fits with the “RED is agricultural and BLU is industrial” theme from the video game. “Chance” and “Community Chest” became “Random Drop” and “Community Crate”, and Saxton Hale’s glowering mug now adorns the colored monopoly money. (I admit I have no clue why $10 changed from yellow to blue and $50 changed from blue to purple). 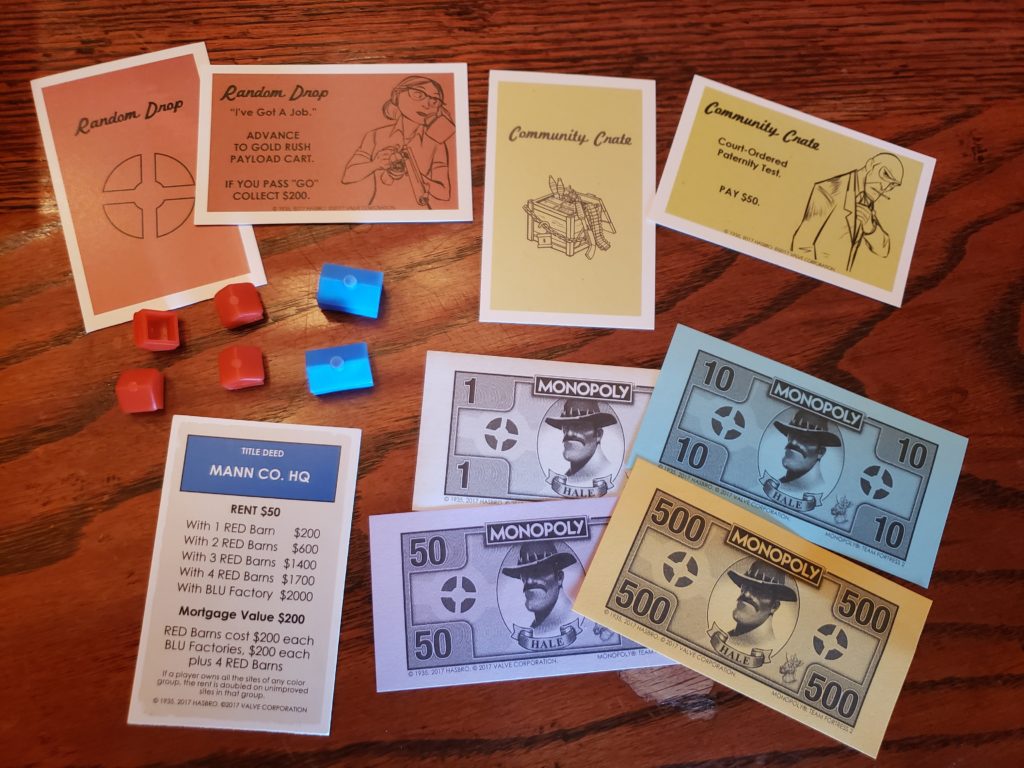 Said cards probably contain the most creative TF2 references in the set, with references to in-game voice lines, comic events, and community memes like Spy being Scout’s dad. It really all feels like they got actual TF2 fans (or developers) to come up with all the references, which really helps humanize the whole set.

The pewter playing pieces are a nice blend of in-game cosmetics and iconic figures like the level 1 sentry or the prop cow from 2fort. The playing pieces are often the highest-profile element of a Monopoly remake, with many sets (like Mario) going above and beyond to make special pieces (others, like NFL, decide to be lazy and phone it in.) Qualitywise, TF2’s figurines are middle-of-the-road, not breaking the mold but not containing any obvious defects. 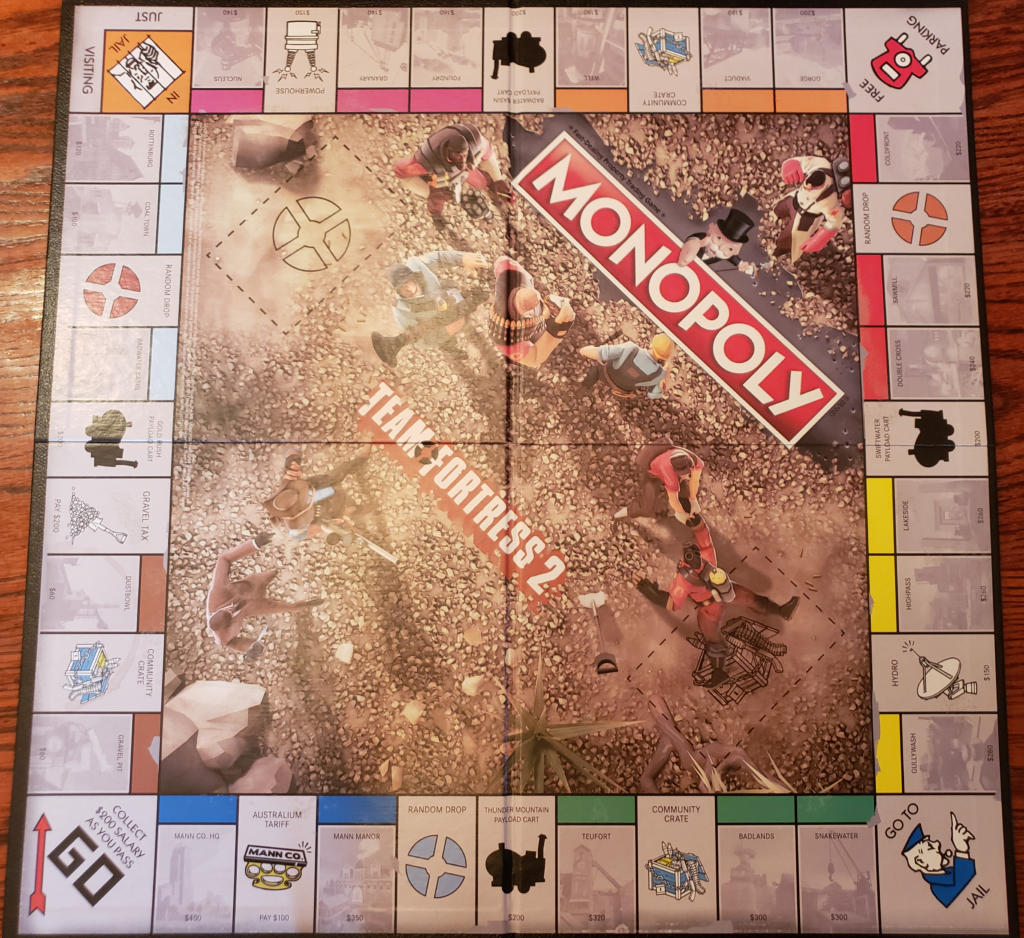 The board itself was designed with pretty obvious in-game references, with almost every space turned into a TF2 map. Powerhouse and Hydro replace Electric Company and Waterworks, obviously enough, and different payloads are now the railroads. The only spots that are unchanged are the 4 corner pieces (GO, Jail, Free Parking, and Go To Jail) which I honestly found strange as plenty of other Monopoly editions at least remade those squares in the IP’s image. 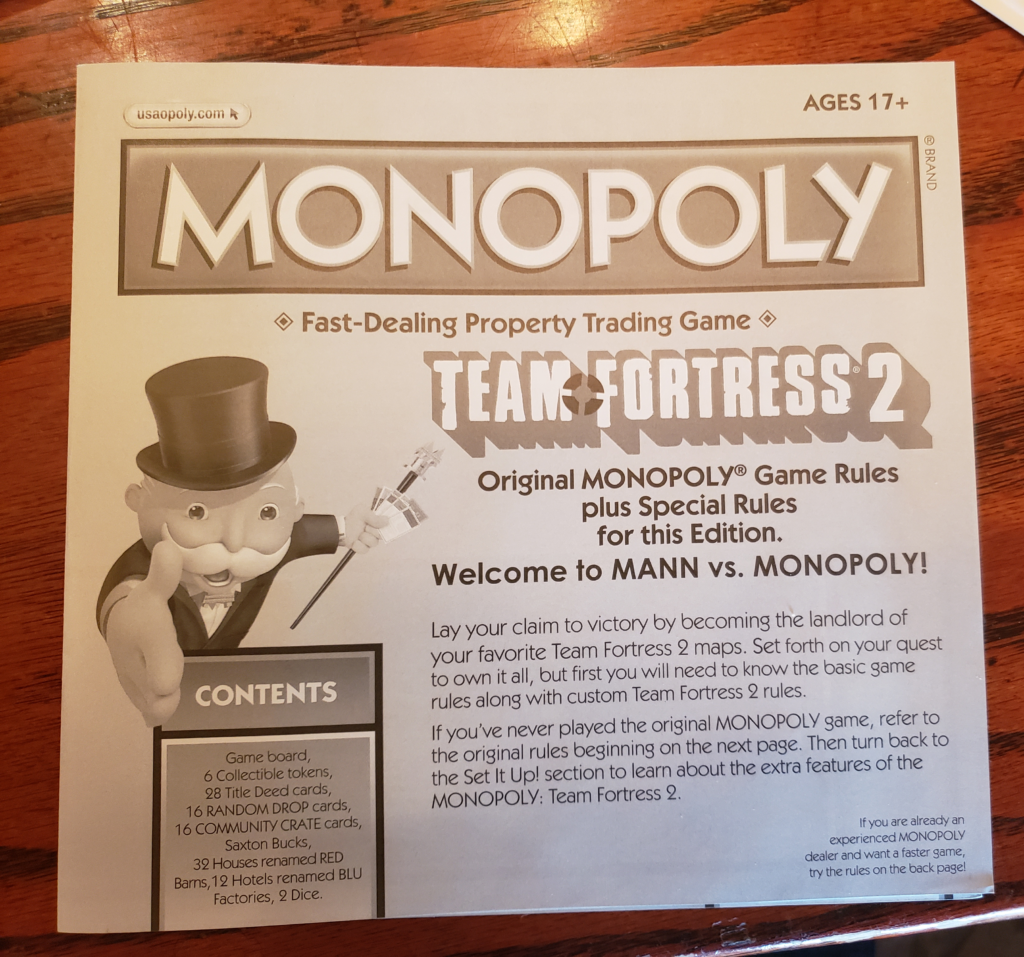 If you’ve played Monopoly before, you won’t need to read the rulebook for any reason, it doesn’t say anything you won’t already know. I was originally intrigued by the mention of “custom Team Fortress 2 rules“, but said section merely outlines the various ways the game elements have been skinned for TF2; there are no optional rulesets or bonus game modes like you occasionally get with more enterprising Monopoly remakes. (Perhaps you could use mine if you really want one?) There also aren’t promo codes for any sort of cosmetic loot for your Steam TF2 account, which is a real bummer since they did include an exclusive hat for those who bought TF2 Chess.

But all in all, I’m pretty impressed with its production, and I wasn’t coming in expecting much. If you don’t own any edition of Monopoly and would like to have one themed around your favorite mercenaries, there are no obvious deficiencies or reasons this set won’t fit the job. But it also doesn’t bring anything new to the table. Overall, I’d mostly recommend this to Monopoly collectors since I don’t think there are many TF2 fans out there looking to play Monopoly and don’t already own a set.