I’ve never really been an MMO kinda guy, even when my first job out of college was writing for one. I never had the patience to level up a character, and they’re always super boring at the early levels before you’ve unlocked anything of value. I first tried World of Warcraft in undergrad after it went pseudo-free-to-play, but didn’t get even remotely close to the level 20 cap before giving up on Kerychtyrr, my zombie warlock. The gameplay felt completely repetitive, just talking to NPCs and killing x amount of y enemies to complete quests.

Bird, why you do this to me

I didn’t touch the game for almost five years after that, when I was in Texas trying to get hired as a Blizzard GM. I bought the current expansion, Legion, just so I could pretend I played the game, and juiced my warlock up to 100 with the free character boost. Now I had the opposite problem, where I didn’t know how to do any of the 6 trillion powers the character had, but I nevertheless saw for the first time a little taste of why people enjoyed World of Warcraft when I played through the quick airship tutorial quest for boosted characters. Every one of my warlock minions had a procedurally-generated name, and it’s amazing how much that made me care about them.

Still, that wasn’t enough to get me into the actual gameplay. (Especially after I didn’t get the job.) That would require a whole new character, created two years later, played properly from the beginning. 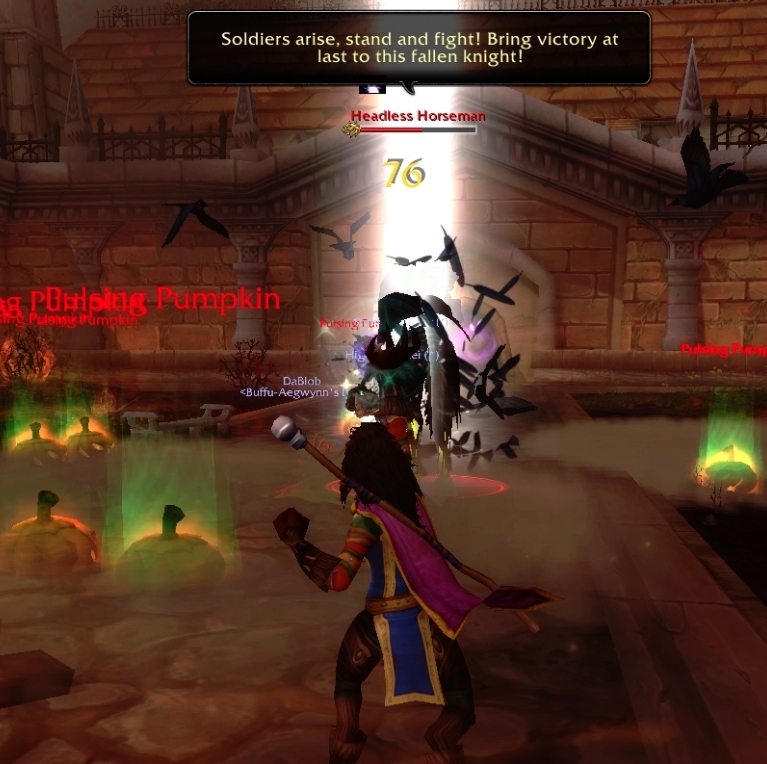 Soulibon is a seasoned D&D dungeon master and my oldest friend; we met in preschool when our moms worked at the same company, and we’ve kept in touch ever since. I was part of his D&D group before I went off to earn my game design Master’s, and I joined his World of Warcraft group after moving away so I could continue playing in medieval fantasy with him. It turns out WoW is significantly more fun when you have a dedicated group to constantly play with. This time I played Eullena the werewolf druid, since I love shapeshifting and wanted to test out various combat roles (druids get different animal forms that can tank, heal, DPS, or ranged DPS). Perhaps the werewolf starting quests were just better than the zombie quests, because I found myself far more invested in my character as she established relationships with the other townsfolk, survived the collapse of her remote Gothic kingdom and immigrated to the Night Elf haven of Darnassus. The werewolf faction had an awesome Tudor artstyle that felt more like Victorian England than the Arthurian origins everyone else had, which made me feel like I’d chosen a faction that stood out from all the others (I can only imagine there are similar things that attract players to any other available faction). With Eullena, I experienced far more of what World of Warcraft to offer and finally learned (the hard way) how people get addicted to this game.

I can’t even really explain how this game sucks you in. You can’t help but form a real connection with your avatar as you guide them through battles and dungeons and find exciting new pieces of gear to diversify your combat options. Also Blizzard does a good job of finding ways to subtly give each region its own gimmick; for example, during Cataclysm quests werewolves get to fight in their human form, and Draenor unlocks a garrison for the player to level up, recruit followers and start role-playing as a fortress commander. Levelups are incredibly fast, unlike most MMOs I’ve tried, so you’re always just a little bit away from a cool new spell or ability. My original goal was to reach level 60 for flight form, and I got to enjoy it for a glorious 24 hours before my sub expired and I refocused fulltime on my schoolwork.

And I haven’t even mentioned the Pet Battles mechanic! There’s an entire minigame that rivals Pokemon in how many different critters you can collect and pit against each other. It removes several aggravating elements from Pokemon (you get infinite ‘pokeballs’ and you have a spell that revives everyone at full health no matter where you are) while adding an open-world globe-traveling element that the Pokemon community has been begging for. There are new and exciting creatures to capture in every single corner of the world, not to mention NPC trainers you can challenge to prove your worth. It took till around level 80 for me to even try a pet battle, but after that I spent almost as much time on them as I did the actual game. My prized fighter is Rölf the little bad wolf, who’d often accompany me even in regular gameplay like a younger werewolf brother.

I’ve had a couple scattered opportunities to play since then, thanks to random Blizzard gifts and free weekends. Last time I managed to reach level 93, with hopes of hitting 100 the next time I get some free hours. Despite this, I’m not sure I’d do it all again if I got the chance to go back and never start at all. There were far, far more occasions than during other games where I felt like I was wasting massive amounts of time grinding mobs to complete a quest or run a dungeon for the umpteenth time. For large chunks I’d have Netflix running on the second monitor to keep myself entertained, and I can’t but think of all the productive things I could have been doing instead of WoW. Perhaps it’s reputation is preceding itself, since I have more hours in multiple other games and they didn’t feel like a waste of time, but at least I’d turned those into hundreds of online articles and YouTube videos.

But I guess, on the positive side, there are three major gameplay concepts I learned from WoW that I feel made me a stronger game developer. Firstly, I’m fascinated by their use of language; Horde players and Alliance players have their chat messages passed through a cipher so only members of their side can understand them. This does an amazing job dehumanizing the other team, while still allowing the barest of communication (Alliance players will quickly learn ‘kek’ means ‘lol’ when said by a Horde member), and it’s made me notice Overwatch does something similar. Enemy heroes often use foreign languages when calling out their ults, as opposed to friendly heroes who use English, which once again makes the enemy feel like a foreign entity. It’s made me consider how I use language in my own games, and whether I can use language in a similar method in future projects.

Secondly, I’m impressed by their use of flight routes. Throughout Azeroth, you can encounter griffin trainers who will allow you to ride one of their birds to anywhere you’ve visited on foot. But unlike most fast travel mechanics, you will need to physically witness the journey in real time. While by certain metrics this is really annoying (especially if you’ve flown a certain route more than three times), it also does a great job making the world feel so much bigger than the player. You’re going to see regions you’ve never encountered before, filled with fantastic new monsters and mini-bosses, and you’ll pass over foreign cities hustling and bustling before disappearing over the horizon behind you. It really drives home how much world there still is for you to explore, and I’m impressed Blizzard resisted the urge to just make it a loading screen like most games would have.

But the third and final lesson I learned from WoW is how not to design quests. The worst part of the game by far is the insanely repetitive fetch and murder/collection quests that never, ever get more difficult or less tedious even as you get higher and higher level. I’m frankly amazed at how fun the game is despite such an integral part of the experience being so terrible. WoW is addictive in spite of its core gameplay loop, not because of it. That being said, whenever it branches out and gives more creative quest designs, it becomes a much more enjoyable experience. Some of my favorite quests have been the vehicle sections where you drop bombs on approaching enemy hordes, or when you help a gardener cleanse his garden of undead in a Plants vs. Zombies pastiche. The big scripted battles where dozens of NPCs fight around you are also great, shame these sort of highlights only happen sporadically in between hours of the same repetitive quests.

Still, I suspect I’m not done with Azeroth just yet. While I’m currently keeping my sub expired for the good of my productivity, the damage is done and I always return in the rare instances I get the chance to do so for free. Don’t be like me. Let sleeping dogs lie.