Remember Medical Necessity? It was a game development project where I had my first ill-fated experience as a project manager. In the end, we got canceled due to lack of progress during the first quarter of production. The only surviving product is the purchasable sprite sheet on itch.io.

The design document and production wiki note that the default names for the player’s allied soldiers are Homer, Berenson, Collins, and Cunningham. And while digging through a lifetime of old boxes preparing for my move to Portland, I found the original action figures those names came from. Their plastic has gone gummy and they’re now too fragile to do anything but collect dust, but at least I can photograph and chronicle the 4 most important toys I owned growing up.

“Corps Man adventures” were one of my favorite pastimes growing up with my younger brother Jake. We had huge boxes of GI Joes, LEGOs, Star Wars figurines, and other assorted toys. And we went on countless adventures where we’d each control one or more characters in sprawling odysseys that often took us around the house, backyard, and even our friends’ houses if they were participating. Arctic expeditions, police/detective procedurals, time-travelers, natural disasters, jailbreaks and manhunts… We role-played a huge amount of scenarios throughout the years, very rarely reusing characters or locales in favor of constantly inventing new backstories and storylines.

The squads on this page are among the very few action figures who always represented the same recurring characters. Jake and I each controlled our own 4-man team of special forces soldiers, and over the years they went on dozens of different missions for the “Power Team”, an international peacekeeping force. We made them ID Cards and everything.

My squad was the Rangers. To be honest, they’re way more boring than the crazy stuff Jake came up with for his backstories. Just jump straight to the Mini-Force if you wanna see what a precocious 7-year-old can come up with. 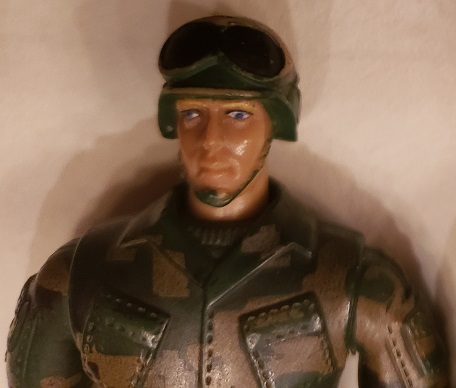 Cunningham (the American) was the leader of my squad, with pretty typical leaderly qualities like being good at any team role and keeping a clear head under pressure. His main gimmick was refusing to carry equipment, preferring MacGuyver-style improvisation, which was why he had no backpack and no attachments on his rifle. 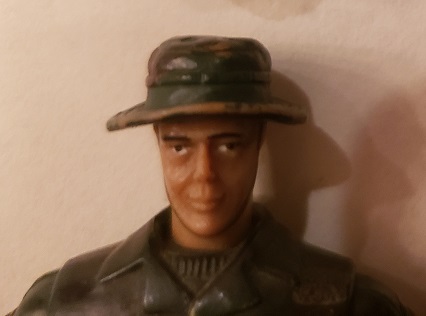 Homer (the Australian) was the team’s muscle and combat specialist. He was always needlessly positive and optimistic, and had a tendency to get injured. So he needed the other characters to drag him around until they found medical attention or a lull in combat to patch him up. He also wore the team’s parachute, which in our young minds made him literally immune to falling damage at any time. 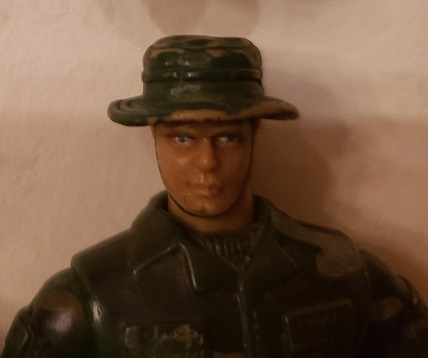 Berenson (the Brit) was the team’s engineer and tech specialist. He wore a radio backpack so he could communicate with HQ, and was usually the one hotwiring vehicles or “hacking” something while everyone else defended him. He was the team complainer and usually sarcastically whining about having to do anything. 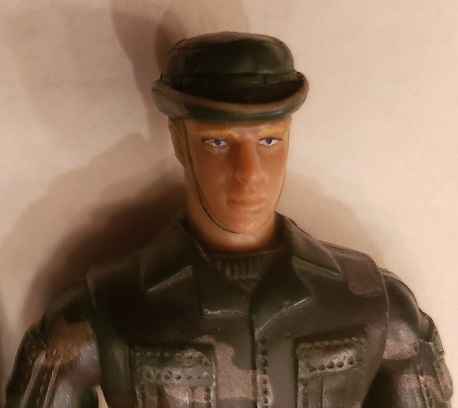 Collins (the Norwegian) was the team’s pilot and sniper. He’d always be the one driving/flying whatever the squads were using to get around, and during combat he’d often hang in the back and snipe with his scoped rifle. He was a scaredy-cat and always nervous about what the teams were getting themselves into.

My brother’s squad was the Mini-Force, and they wore tan uniforms to distinguish themselves from the Rangers’ green. Each teammate also outranked the next (unlike the Rangers, where everyone but Cunningham had the same rank) and could issue orders to anyone below them in this list. They also each had a single Charles Atlas superpower that made them play like a squad of Jojo’s Bizarre Adventure characters. 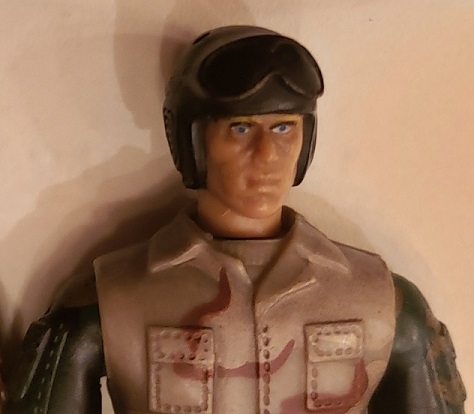 Jake himself was the commander of his squad. He had a custom uniform we made by stitching a bunch of different army men pieces together ala Frankenstein. This represented his chameleon abilities. Because he didn’t wear the uniform of any specific army, he could bluff his way into enemy bases by claiming he worked for them. His sidearm was a laser pistol he canonically built himself. 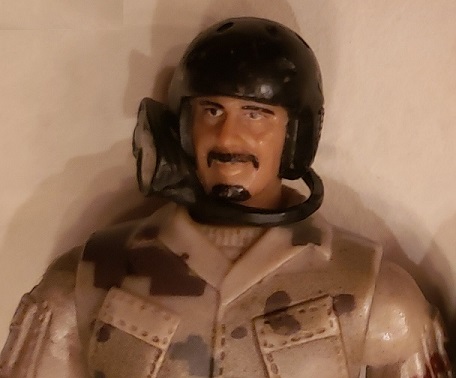 Cooper (the Canadian) was Jake’s second-in-command and “the competent one”. He was so well-read that he essentially could roll natural 20s on any Knowledge check. He was often left in charge while Jake was away infiltrating an enemy base. I don’t remember a single time he actually put those goggles on.

When it came time for me to move away to college, our parents got Jake a dog so he’d still have someone to play with, and he named it Cooper since it was his new second-in-command. 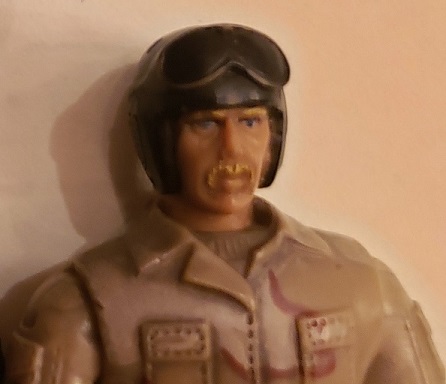 Loft (the Antarctican) had a Barbarian-style rage that he could enter whenever he ate a Snickers bar. He didn’t talk much and he didn’t use guns, choosing instead to wade into battle dual-wielding a knife and a metal club. We used him as a “Shit, we need someone to do xyz but no human could realistically pull that off” plot device a lot.

Originally, the fourth member of the Mini-Force was Fireburst (the English, cause we thought England and Britain were separate countries). He was “the stupid one” and usually just fired his gun at enemies or screwed something up to make the mission harder. Then one day we lost him in the backyard. He got replaced with Bentley (the Russian), who had a black printing error on his chin we both interpreted as a minuscule soul patch. Bentley was a rock climber who could scale any wall, but he never got much of a personality; his main gimmick was not being incompetent like Fireburst.

(Years later we found Fireburst, who we decided was now a badass survivalist that retired after being rescued and reintroduced to society.)

Some other action figures entered the canon as we bought more figurines from the same set. They only rarely appeared as “guest stars” for a mission, or in storylines that involved the home base being attacked by invaders. 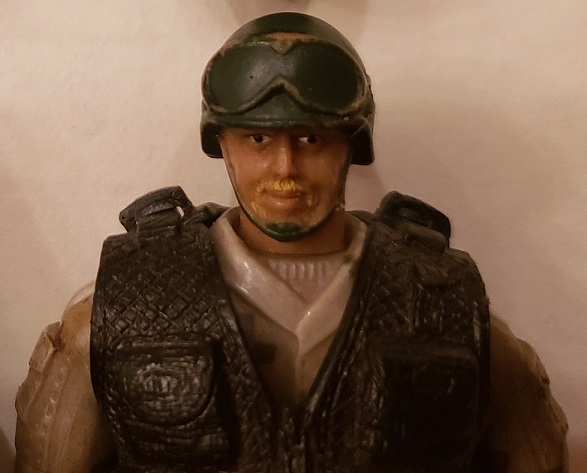 Maximilian Xaviers was the eccentric commander of the HQ, and often the one assigning us missions. He preferred to stay off the front lines, so he’d wield a high-powered sniper rifle whenever he found himself involved in combat. Sometimes he’d get kidnapped and we needed to go rescue him. 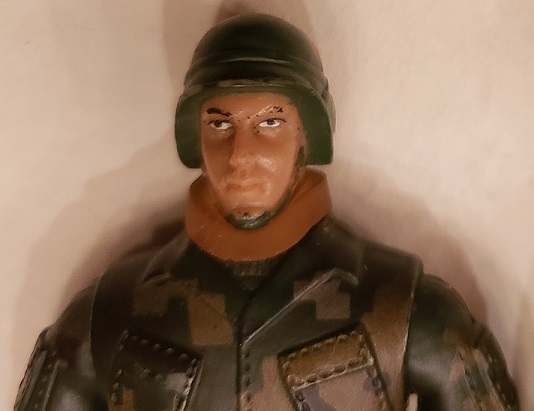 At some point, we realized HQ’s radio operator should get a name since we’re constantly talking to him, and thus Omeed Damont was born. He was a redeemed criminal and sworn noncombatant who refused to fight or kill anyone. So he never did anything beyond being the no-nonsense radio guy. 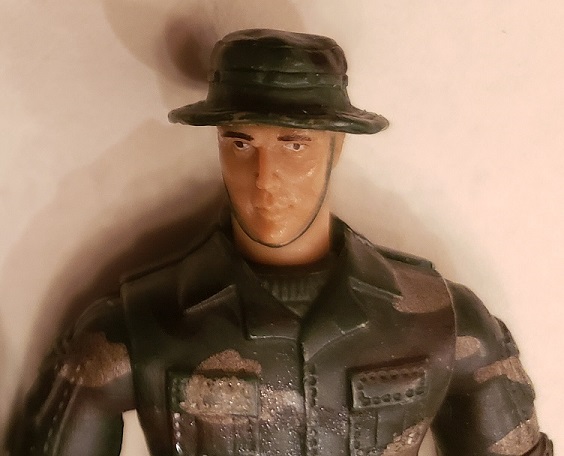 Achmed Møter was far-and-away the least seen character. He was just “a soldier stationed at HQ”. He filled any minor plot role when we didn’t have another character to do it. I think he even died once or twice. We pronounced his last name as “Moy-turr” but that’s probably not how that letter actually sounds. 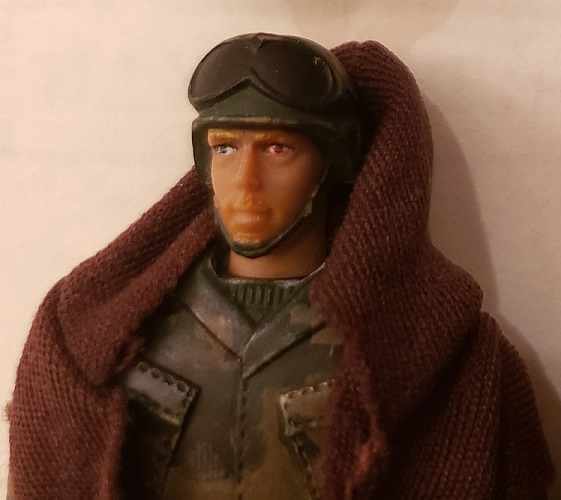 Mahgninnuc was Cunningham’s evil twin, and he had a red eye and blond goatee we added with sharpie. Sometimes he commanded the evil forces, sometimes he was an underling working for the current villains. But he was always Cunningham’s arch-nemesis and the only recurring antagonist. He wielded a transparent red sword that could superheat to cut through anything, and often used it to escape after the heroes destroyed his evil plan of the week. I don’t think they ever ended up catching him.

This is actually the second time I rediscovered this small bag of action figures. They also reappeared while Jake and I were cleaning the basement shortly before I was gonna move away for college in 2009. We enacted a short ceremony where Xaviers gave all eight of them medals and they retired with full military honors. Shame I can’t really remember any of the missions they actually went on, but these dudes are an important part of why I grew up loving storytelling to the degree I do.