Previously I used Left 4 Dead 2 to showcase “thematic gameplay“, a development philosophy whereby each map in the game gets a subtle tweak to the core gameplay loop to make it feel different from the rest the game has to offer. Payday the Heist is actually another masterclass in this philosophy, so to reinforce my point I thought I’d discuss how a second title used thematic gameplay to create very memorable and distinguishable heists. 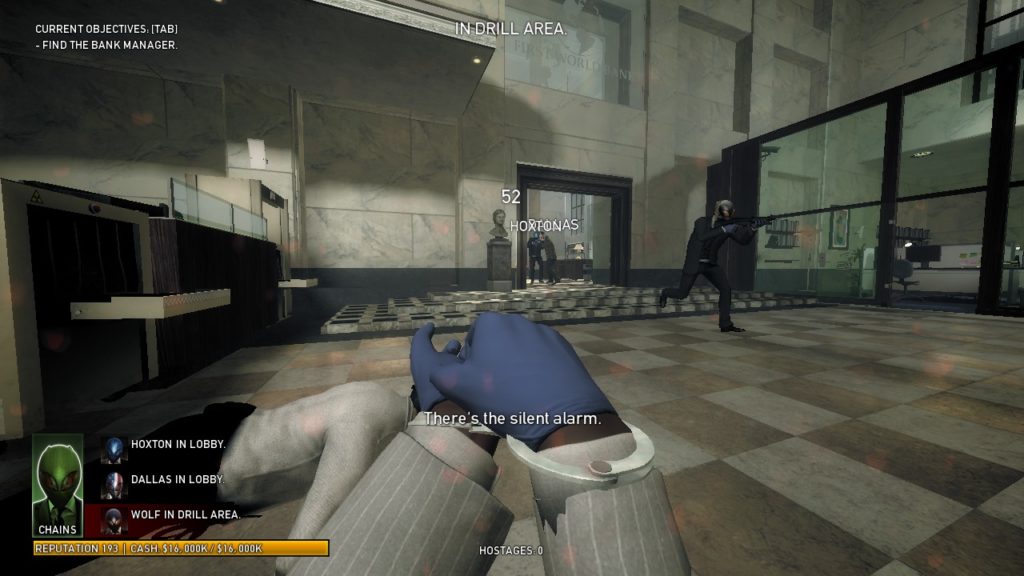 First World Bank doesn’t really have any gimmicks, as it’s setting the baseline for the rest of the game. One after another, it showcases the most important game mechanics (casing mode, taking hostages, waiting for drills, destroying cameras, filling loot bags, and the final sprint for freedom) so that future heists can put their own spin on the formula. 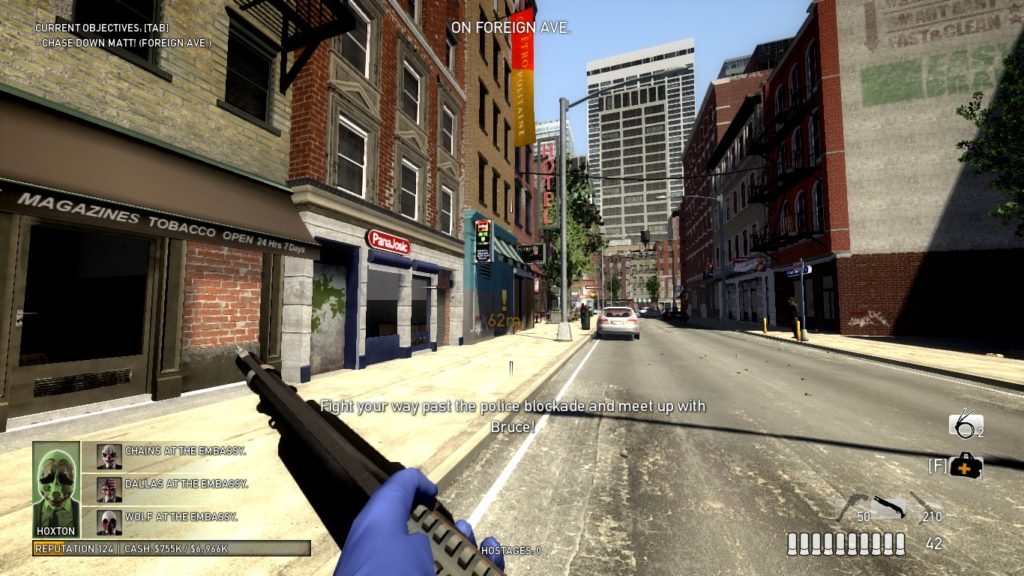 Heat Street is obsessed with forward progression, far more than any other heist in the game. No other heist can hold a candle to how many different zones the players have to sprint through, and the cop formations/spawn points are designed to relentlessly force the players to keep moving towards the eventual exit. 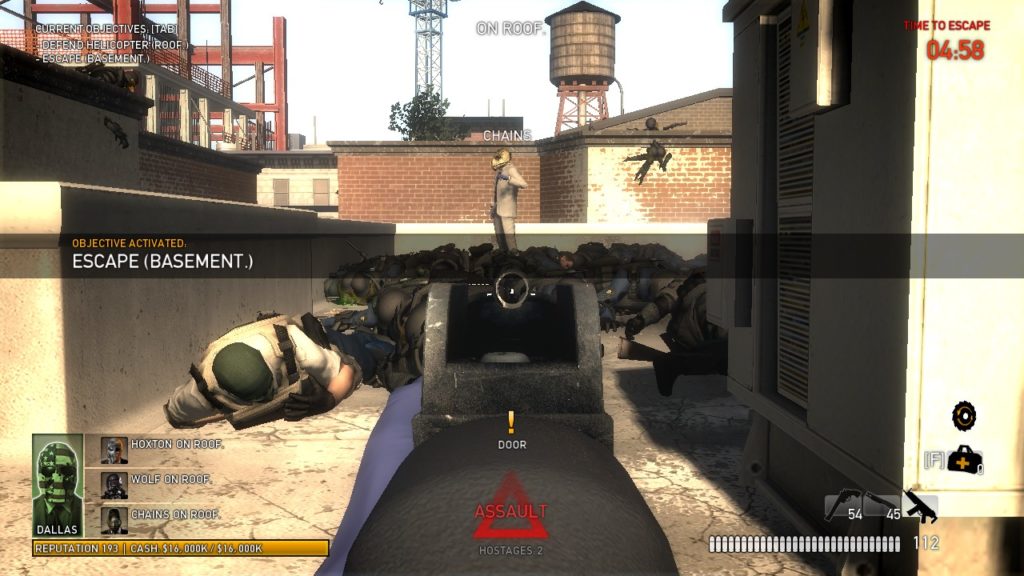 In contrast to Heat Street, Panic Room has almost no horizontal progression. Instead its map is filled with verticality, forcing the players to traverse the apartment complex’s many floors repeatedly to complete objectives that never seem to stay on the same level as where you are. This map also has the most scripted environmental destruction of any base-game heist, though Undercover will eventually one-up it in that department. 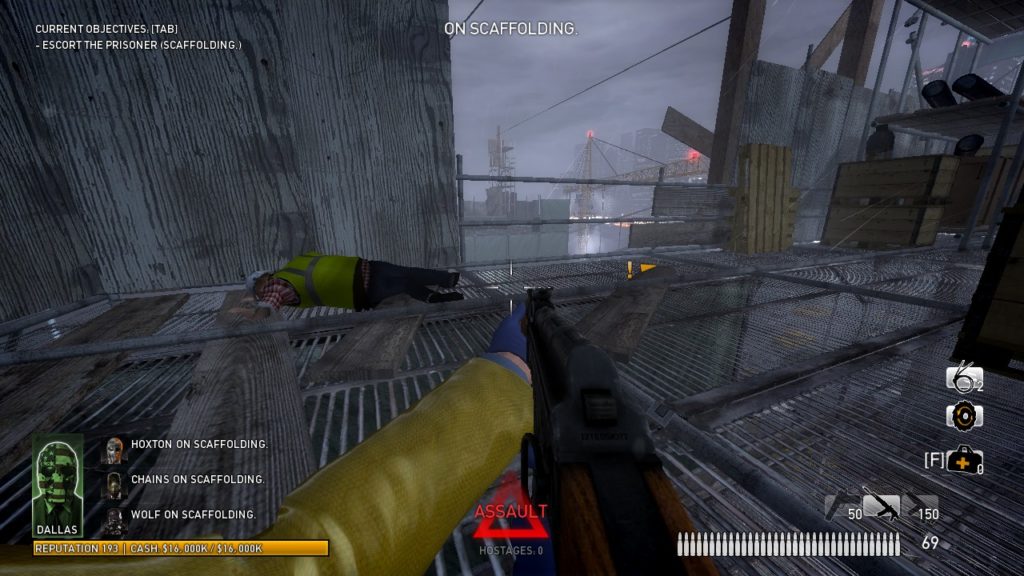 Like Heat Street, Green Bridge enjoys forcing the players into new areas. But unlike Heat Street, it is content to do so at a staggered, stop-and-go pace. Nobody’s going to be sprinting anywhere due to the terrible cover and chest-high cars scattered in your way; instead the gameplay will consist of “holdouts” where the players frequently hunker down until the coast is clear to continue. This is reinforced in the overly-generous 10-minute timer given to escape; no other heist gives you nearly that large a widow, because the devs know the players will not be progressing through the remaining kilometer of map very fast. 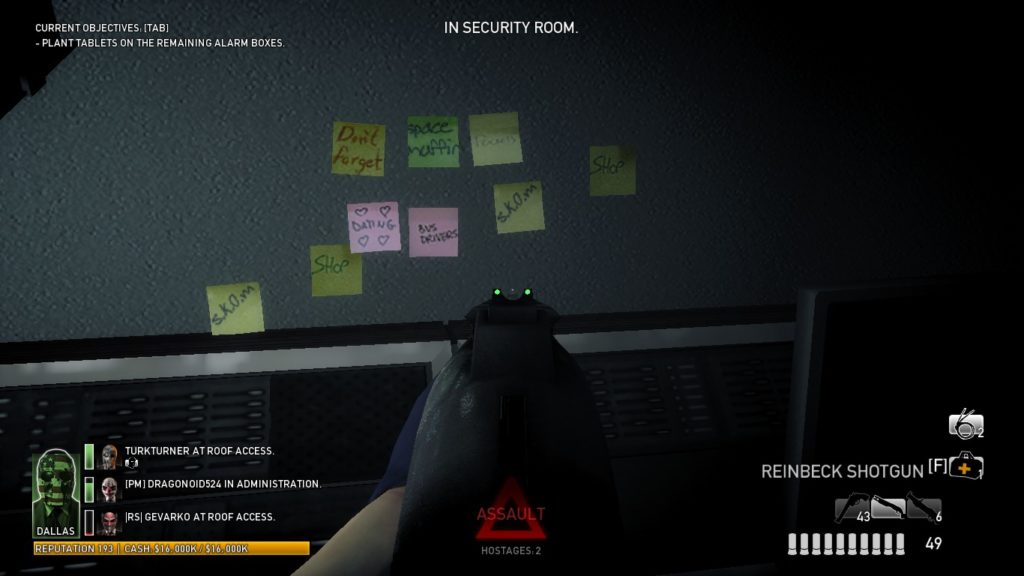 Diamond Heist is (obviously) the only Stealth mission in the game. Not much to say here, it massively reinterprets the core gameplay by making the heist easier the more you’re able to successfully complete before sounding the alarm. 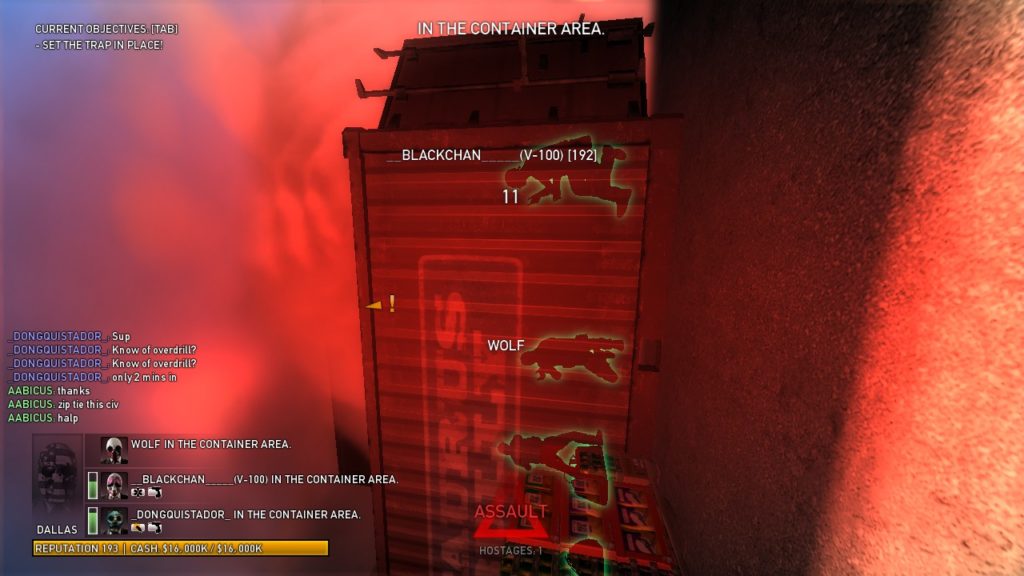 Slaughterhouse is a map designed around every new chunk of map having worse cover than the one before it. You begin the heist gunning down cops in a pig-filled abattoirr that lets you hide almost anywhere, but then you move into the conveyor belt section with its straightaways, and finally the container yard where snipers will make mincemeat of you. The primary map objective (lift the gold using the crane) reinforces this mechanic by straightup deleting one of the few containers you can hide in, right when you could probably use it the most. 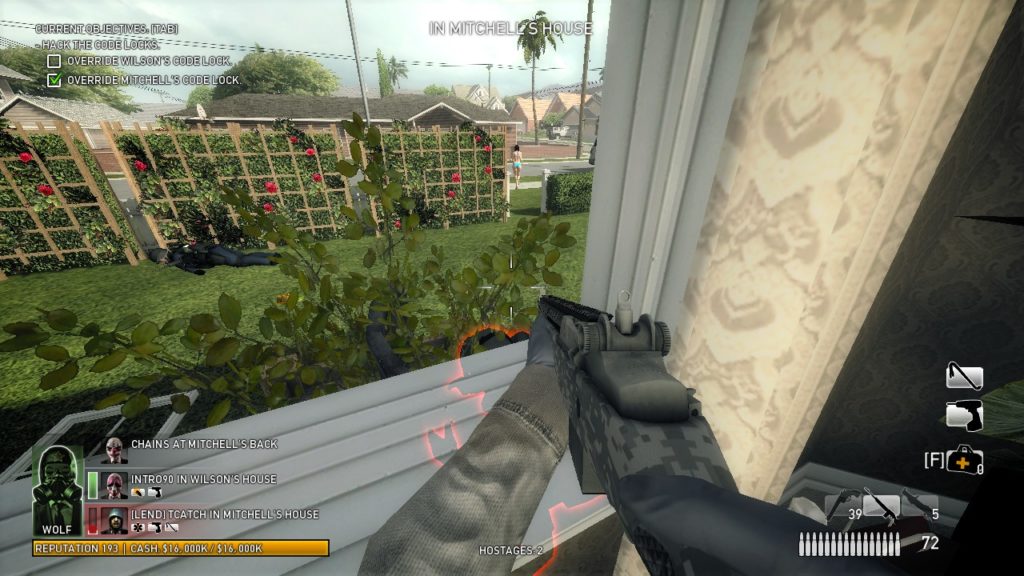 Counterfeit is the opposite of Slaughterhouse; whereas in the former your cover leaves without you, in Counterfeit your cover stays in one place, but you’re forced to repeatedly abandon it. The conjoined basement is one of the most secure locations in the whole game, and any team could easily keep it secure from cops indefinitely; too bad every single map objective forces you to leave your sanctum to restart the power or turn on a water hose. 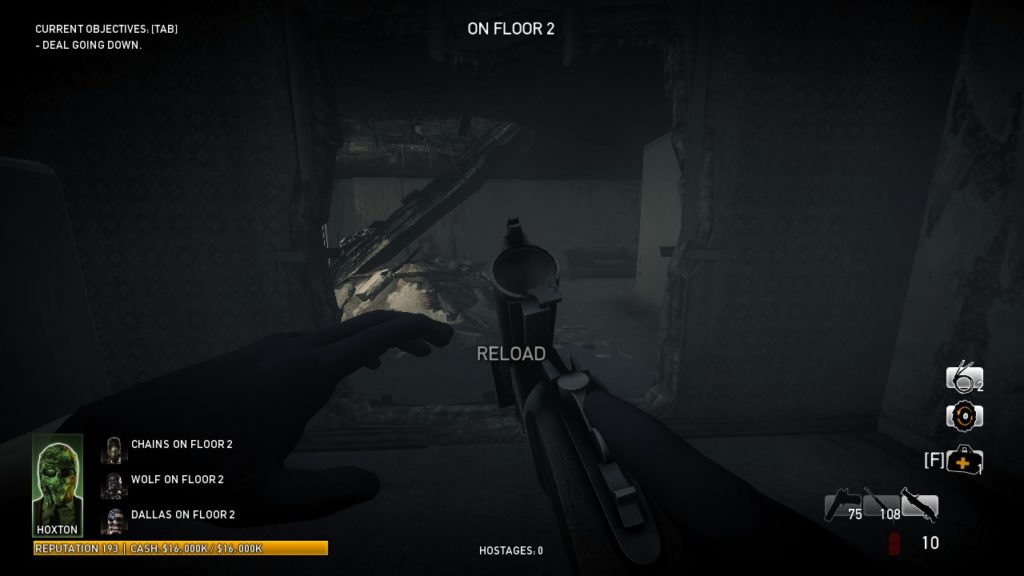 Undercover took the “environmental destruction” mechanic from Panic Room and really went ham with it. By the time you reach the end of the heist, most of the interior walls will have blown up, and cops will have almost certainly destroyed all those boarded-up windows you painstakingly prepared. There’s also the Taxman NPC, who has an “interrogation” mechanic not seen anywhere else in the game. 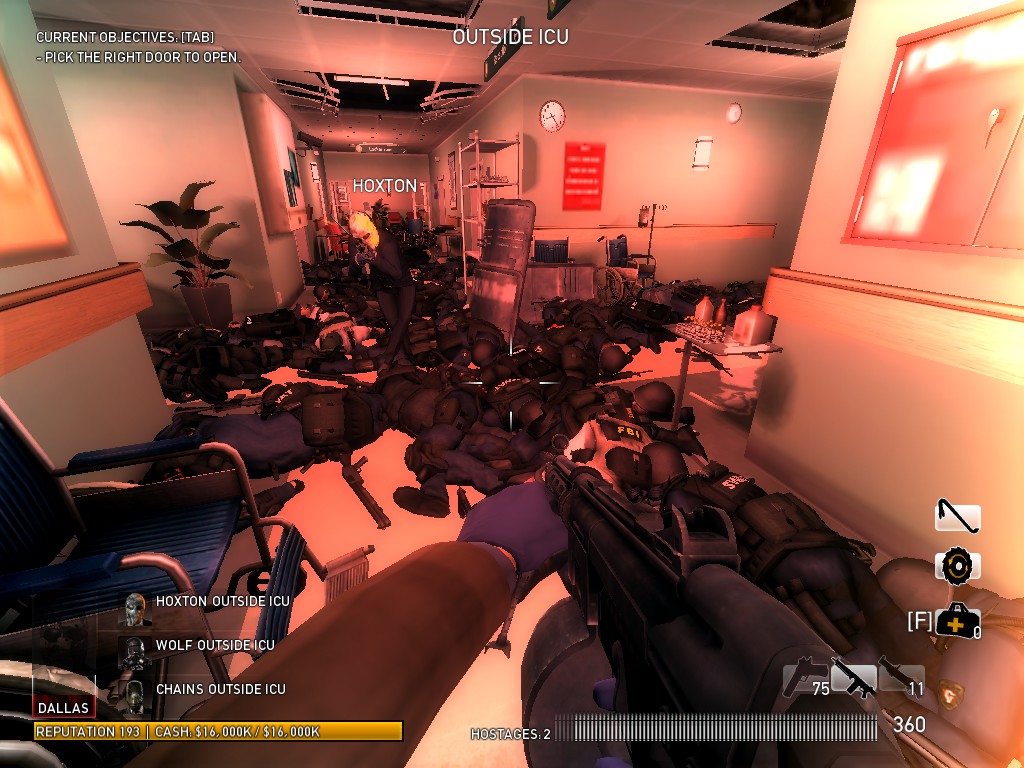 And finally, even No Mercy strikes its own tone as the king of cramped hallways. This gimmick was kinda mandatory, since it remakes a pre-existing map from Left 4 Dead, but nevertheless the tight hallways that funnel cops into congested pockets of raw firepower creates a flow completely different from the other, more open maps in the game.

I find the gameplay design choices in Payday the Heist fascinating in part due to how subtle they are. The overall gameplay never deviates, and yet all of these tiny thematic changes I described do an incredible job keeping every heist feeling distinct from each other.