Happy Saturday! As always, let’s look at some gameplay footage from our most recent Medical Necessity build and go over the updates we’ve completed this week:

If you look at last week’s footage, the first new thing that pops out is probably that green bar at the bottom. That’s the Team Health Counter, an experimental feature Pat added that tracks the total remaining health on the player’s team. Our intention was to aid the player in keeping track of the overall state of the team, to counteract the tunnel vision that playtesters were showing when focusing on their current healing target, but playtesters didn’t find it as useful as we hoped (Some even mistakenly thought the bar was the player’s health.) One of our early upcoming goals is to adapt the Team Health Counter into four smaller counters that each show the health of a single allied unit. We’re hoping that’ll aid players in choosing heal targets while also emphasizing the “bigger picture” focus we’d intended for the Team Health Counter to highlight.

You might also notice the map scale is significantly smaller. We had been struggling with making the games feel rewarding with smaller bot counts; playtesters were enjoying the massive spamfests with dozens of bots per team, but they were less receptive to a smaller skirmish where each individual unit was more important. We want these smaller fights because they really draw out the importance of player tactics, and force the player to choose his heal targets wisely. It was Pat’s idea to scale the map down, and it’s really surprising how elegantly that worked. The smaller map causes the bots to encounter changes in the map geometry sooner and more frequently, which causes more rapid changes in behavior, which leads to more interesting results for the player to witness. 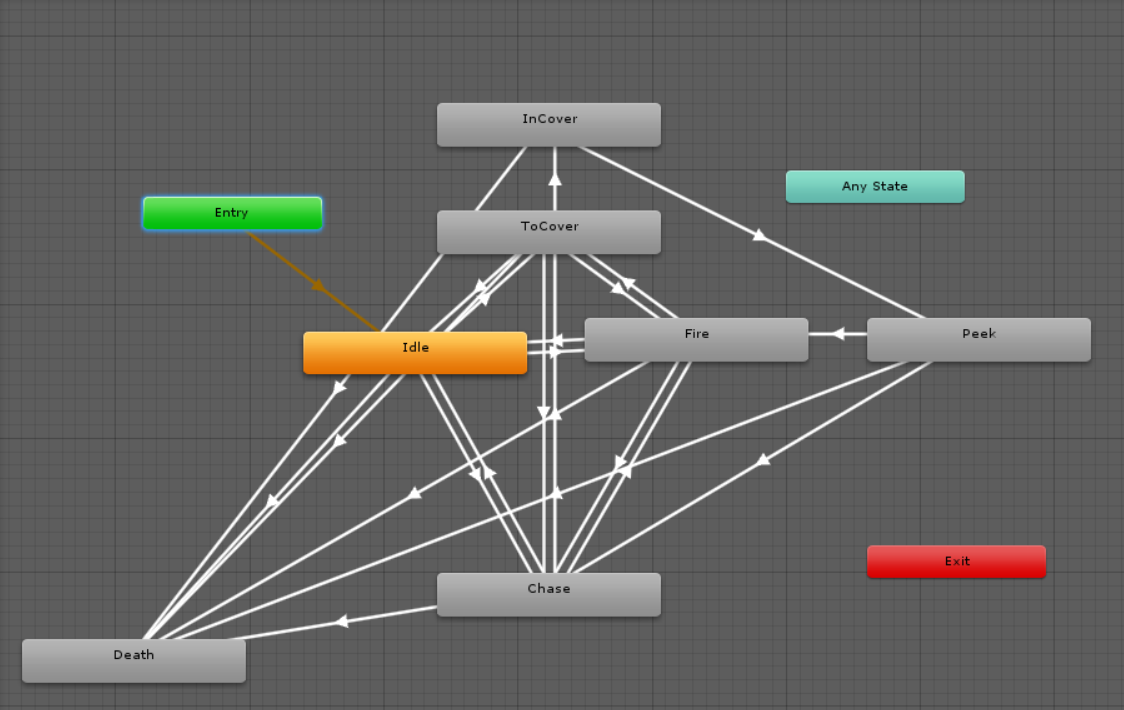 This is Ben’s ‘bot behavior’ solid-state machine, the same one I showed two diaries ago, and you can see it’s gotten a lot more complicated. The bots will now take cover if being fired upon by multiple enemies at once, and will peek out of cover to check and see if the coast is clear before returning to the default “explore unseen areas of the map” behavior. Our top priority next week is to give bots a “personal space bubble” that encourages them to spread out when encroaching on each other’s position.

You might also have noticed the new end-game screen that shows the player’s score after winning a match. Several of our playtesters enjoyed replaying the round just to try and ‘score’ better, and we wanted to explore options for ‘quantifying’ how successful a player is at completing the level. Right now, the score is largely dependent on how much health the team has remaining, but we’ve also looked into an algorithm that scores based on how long each teammate survives the round, basically a time-based version of the score system used in Left 4 Dead Versus. We’re hoping further playtesting will show us which focus works better than the other. We do think it’s important that the game doesn’t punish the player for sacrificing himself; this is a team-based game, and if the player dies while setting up his team for success, he still deserves to win the round.

Last but not least, Carry has implemented classes for all the upcoming firearms! They aren’t quite ready to enter the battlefield yet, but soon we’ll have a lot more variety than the current shotgun/rifle/sniper triumvirate. This ordnance variety will extend to the player as well; since we’ve structured our code such that we only need to switch the bullet out, we can easily give the player access to a healing version of every gun the bots get to choose from.