The bots in Payday: The Heist are designed to fill the role of an average if unremarkable teammate. They’ve got a number of behavioral quirks and coded advantages over humans, but that’s just to compensate for all the really basic stuff they can’t do at all. This guide will cover every possible difference I’ve found between the Payday: The Heist bots and their human counterparts.

AI bots have 75 hitpoints that are constantly regenerating, turning them into pretty impressive bullet sponges so long as they aren’t standing out in the open taking suppressing fire from three different directions. When downed, bots will always have a countdown of 30 seconds before going into custody.

AI bots have unlimited reserve ammunition, though they still have to reload their clips. This means they will never pick up ammo packs scattered along the ground, though enemies they kill will still drop them. Bots have the same accuracy as the police officers. Crew bonuses will also not affect bots, even ones like Aggressor that logically could.

AI bots that take a lot of damage in a short time (for example, Bulldozer blast at close range) play an animation where they either combat roll or stumble to the ground and slowly regain their footing. They cannot attack during this animation. Security guards will not notice bots during the stealth phases of any heist, and bots will not set off the metal detectors in First World Bank.

AI bots are generally immune to objectives requiring placement. For example, when Bain says he won’t blow the C4 in Panic Room until all heisters are at a safe distance, he ignores bots. Dr. Erikson in No Mercy also won’t start talking if the only heisters near her are bots. Some exceptions are the No Mercy elevator, which will not close until all four heisters are inside, and the gold container in Slaughterhouse which cannot close if anyone is standing inside. Bots also do not have to be in the endzone to complete a heist.

Similarly, bots can pass through a number of obstacles the player cannot. Bots are not blocked by the invisible wall at the entrance to the building in Undercover; they can even run outside and around the corner. Bots can also exit the chain-link gate on the starting roof of Slaughterhouse before it opens up.

As already mentioned, probably their most annoying feature is an inability to sprint.

The bots’ loadout always consists of either an unupgraded AMCAR-4 or an unupgraded Compact-5 with no deployables or equipment. When downed, the pistol will be the B9-S. The mask will be Clowns in multi-player, and match that of the host in single-player (for example, if the host is wearing Presidents, bots will wear Presidents.) The chance of them equipping an AMCAR-4 vs. Compact-5 is completely random, and they’ll never switch to the other for the duration of the heist (unless they repeatedly jump in to replace disconnecting players, they randomly pick one of the two guns each time.)

Bots have a very short ‘tier’ of focuses that determine where they go. Each level of the tier overrides the ones below it.

Tier 1: Has a human called me to his position? (If so, try to get over there)
Tier 2: Is a teammate downed and needs reviving? (If so, try to reach them and revive)
Tier 3: Otherwise, try to match the positioning of the nearest human player(s).

All of these tiers don’t actually refer to the human player himself, but his position at the moment the bot made the decision to move. This can cause them to occasionally make some dumb decisions; for example, if you’re the sole human and dart out of cover to grab some ammo packs then immediately dart back in, you’ll often notice your teammates leave cover to try and reach some random spot along the path you took. Likewise, if you shout at Chains to follow you while standing in Spot A, then sprint to Spot B, you’ll witness Chains attempt to reach Spot A (regardless if it means walking right past Spot B) for some time until his pathing updates and he moves towards your new location.

If there are two human players, the bots will pair off, one for each human. If there are three humans, the lone bot will stick with whichever human is the closest to his position. If the human player(s) hole up in one position, the bots will spread out to try and form a tight perimeter around the humans. If allowed to stand still, the bot will crouch to improve weapon accuracy. 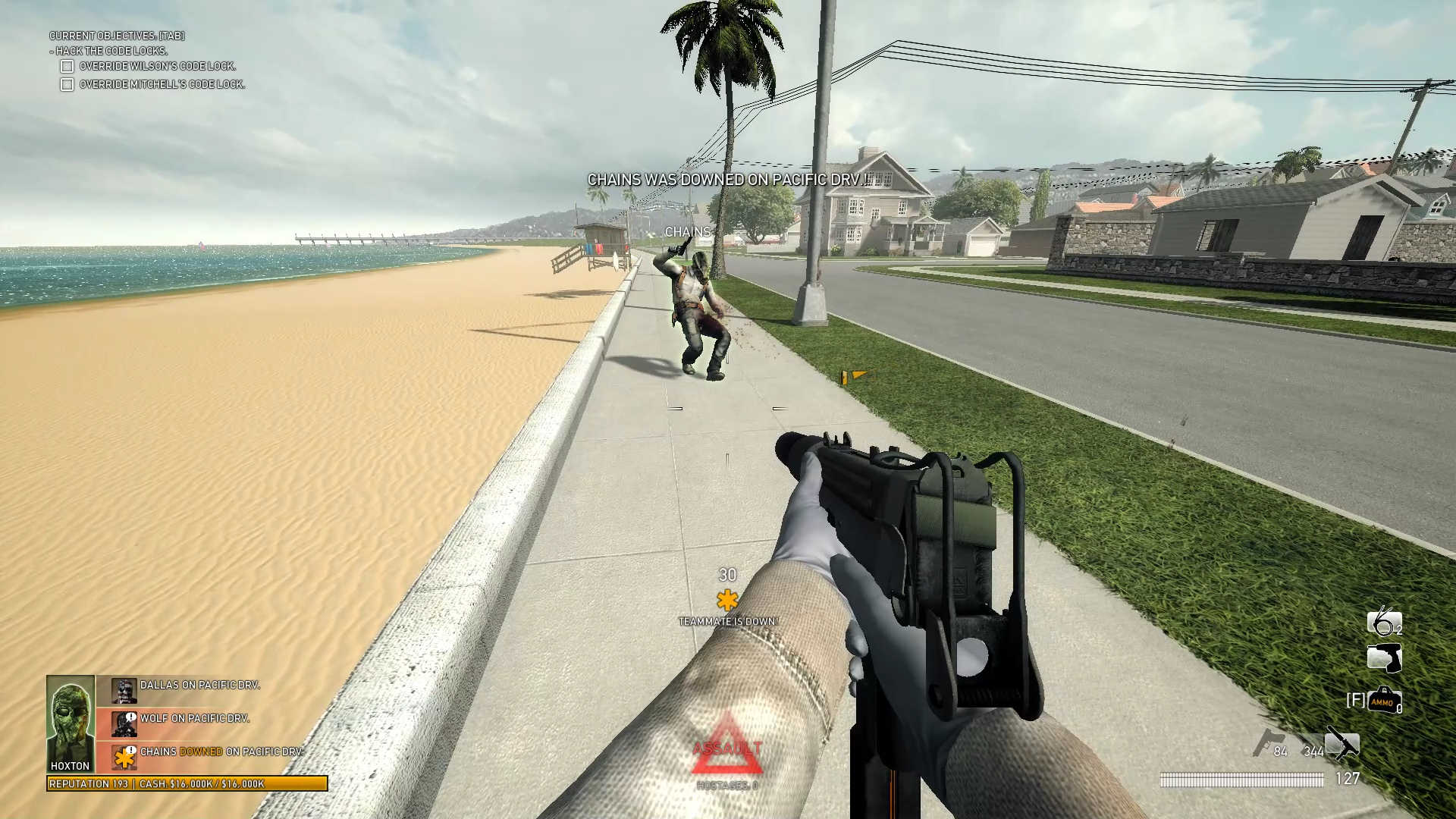 Bots will not complete objectives and cannot pick up objective items like crowbars or thermal paste. If a human player holding an objective item quits, the item will be passed to another teammate. If this results in duplicate items passed onto the same player (for example, everyone but the host disconnects so the game tries to give him both cans of thermite) the extras will be lost permanently.

Bots have infinite-range “vision” which is obscured by map pieces (walls etc.) This means that they usually try to kill every cop within their line of sight but will not go out of their way to hunt any down. They will also tag special units and shout at any visible civilians to get down on the ground. However they reserve no special attention for killing tagged units; this is why they’ll often start reviving the player and ignore the Taser that downed him. Bots will attempt in vain to shoot through a Shield and will aim while being tased (though they won’t necessarily aim at the Taser…). Bots can see perfectly through smoke grenades.

Bots grant no special treatment to a cop currently in the process of being converted into a hostage. Until the cop has kneeled on the ground and dropped his gun, they’re fair game for getting shot. Bots ignore civilians while aiming and can fire through them. I used to think bots would rarely kill civilians but it turned out it was a specific death animation from the cops.

During the stealth portions of certain heists, bots have preprogrammed locations where they stay and attempt to keep civilians in check. In Counterfeit, bots will spread out among Mitchell’s and Wilson’s front yards, and in No Mercy bots will congregate around the receptionist’s desk in a way that lets them see all three buttons. If the player shouts at a bot during this phase, it will forget this placement and resume following the player for the rest of the heist. Bots will shoot at the law enforcers during the stealth phases of No Mercy and Counterfeit. On No Mercy, I’ve seen one use the BS-9 to kill the guard but usually they’ll use primary weapons and break the stealth.

The bots don’t actually exist during the stealth phase of Diamond Heist. They will crouch near the spawn point, ignore the players (you can’t shout for them to follow you) and the map/security guards will completely ignore them until the alarm sounds. If a human player disconnects during the stealth phase, the new bot will follow the nearest player around but remain invisible to guards. (They’re also in this incorporeal state during the quiet part at the beginning of Undercover. This is so they don’t disrupt the deal by shooting at the undercover gangster cops.)

The bots have a number of special moves that only they can perform.

Bots can slide in combat, as well as roll and peek out from behind cover. They can scale a wall/railing to get to the higher/lower floor and even leap through windows with a special ‘shattering’ animation. You may notice these are all moves used by the cops 😉

When reviving a teammate, bots will pull out a syringe and stab it into the victim’s chest.

In First World Bank, before the first assault wave begins, an AI teammate has a chance of jumping on the front desks and repeating Robert De Niro’s speech from the bank robbery in the film Heat. After breaking into the second half of the map, a bot often looks down at the vault and expresses relief we’re not trying to break through those doors. 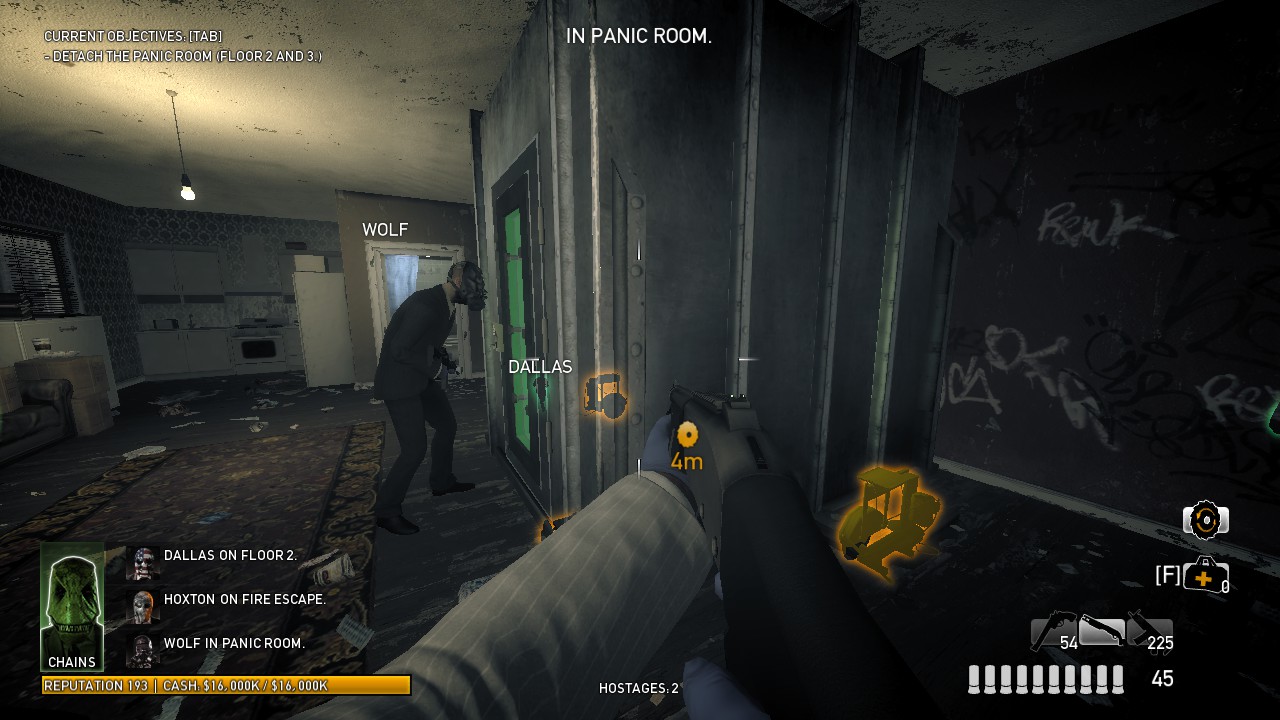 In Panic Room, after you have cleared the room with the red door, a bot will look inside the panic room and exclaim that there was even more money inside than they’d thought. Also, if you’re on the roof when Alex flies the panic room away, a bot might stand in the corner and blow it a kiss.

When the elevator shudders in No Mercy, bots will lose their footing and fall to the ground temporarily.

The bots really aren’t as bad as people say they are. Sure they can’t complete objectives, but at lower difficulties they’ve got a pretty nice niche to fill that players would struggle to replicate. Just like in Left 4 Dead 2, I often play with two friends and I think a single AI teammate is the perfect amount, so you’ve got a bullet sponge perfect-vision sniper-countering comrade. Plus that means more ammo packs for the rest of us.

The fact that they don’t sprint is the single most annoying thing about them. Honestly, I’d have preferred they sprint everywhere and lack walking if we can’t have it both ways, but this guide is about what they are, not what I wish they were.

If I’ve missed anything in this guide, or if you spot any errors, please let me know and I’ll touch it up as soon as I can. Thank you for reading.