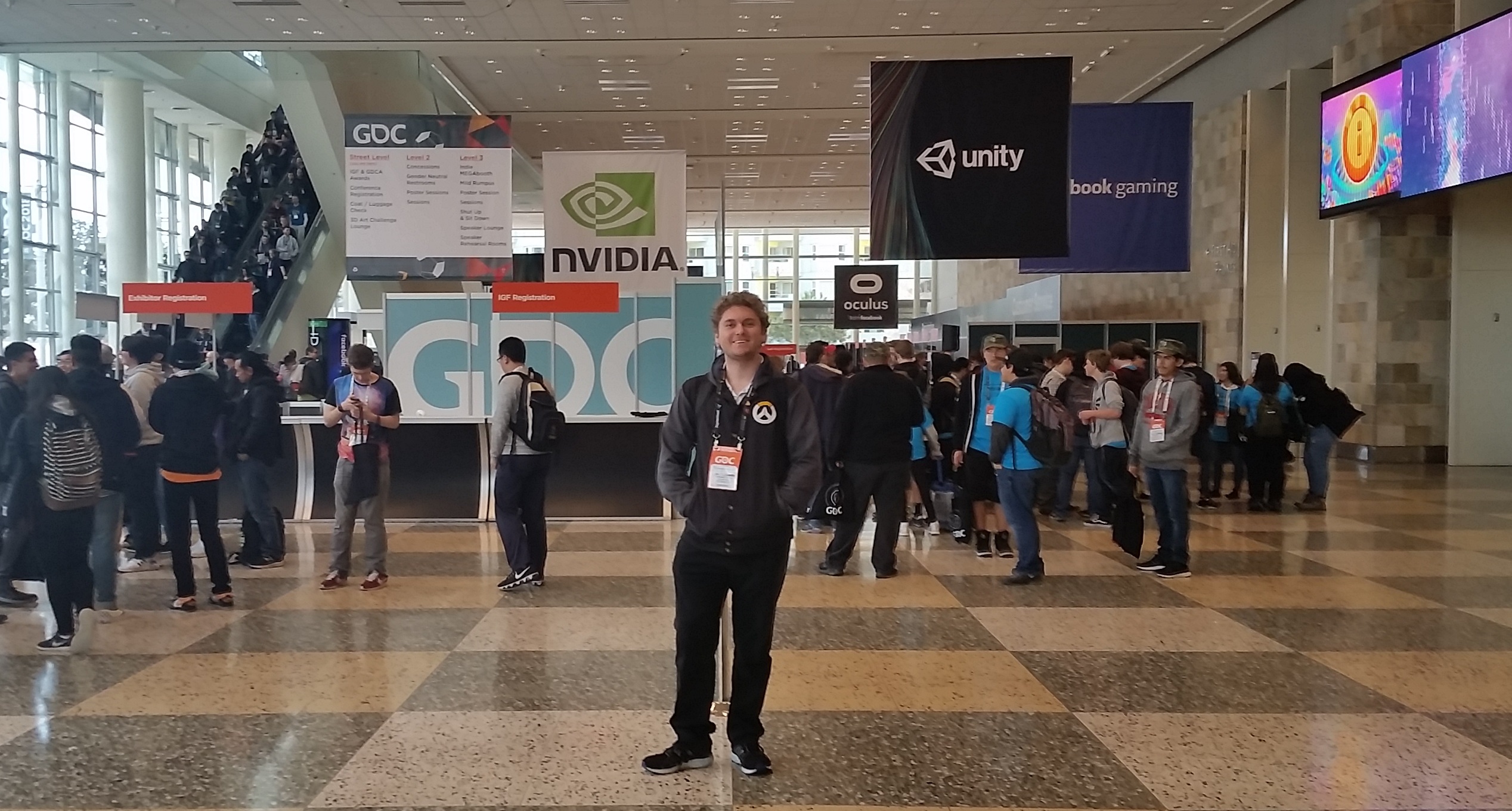 The Game Developer’s convention is a yearly expo where professionals in the games industry all meet up to swap stories, listen to lectures focused on the developer’s perspective, and give each other business cards in the hopes of forming connections and (for some of us) getting hired. This year I was lucky enough to attend!

Due to my new position as lead marketer for Major League Magic, I prioritizing attending marketing lectures, which turned out to be a blessing in disguise because I never had trouble attending any lecture I wanted. Most of my fellow students reported their favorite lectures filling up before they could get into the room, but we always had free seats in the business section! Some of the lectures were basically sponsored advertisements, my personal favorite was GenVid which is basically an eSport-focused streaming service developers can integrate into their game to add custom, interactive HUDs into the viewer experience. It’d let viewers manually choose which of several layers of HUDs they want to be able to see at any given second, mostly so they can change the visible player stats/in-game GUI elements. As someone who constantly wants to check the mini-map while watching streams of CSGO, I have high hopes for their product and hope it takes off (*I’m not being paid by them, I swear) 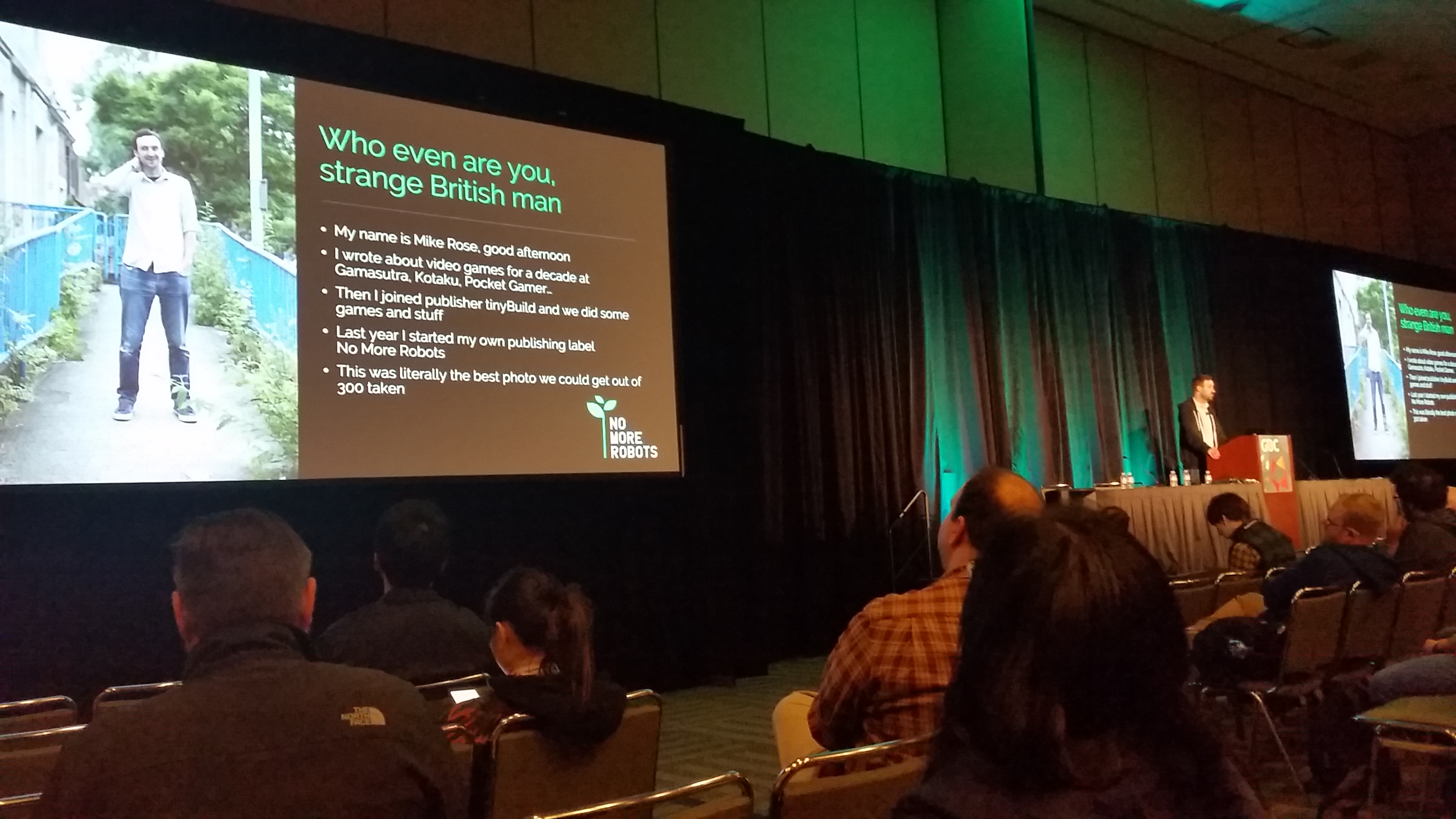 Other lectures were from industry professionals describing the tricks they’ve learned to help your game rise out above the rest. My favorite lecture was from Mike Rose of No More Robots, whose talk focused on up-and-coming services he believes current marketers aren’t taking enough advantage of. He discussed his successful use of Discord and Mixer to promote his games, two services I’d never seriously considered until now. Another lecture I really enjoyed was a moderated round-table featuring game developers who’d struggled with mental health issues from working in the industry. One of them the narrative leader for Deep Silver Volition, and I wished I could have run up and shake his hand or get an autograph or something because I love the Saints Row franchise so much, but it felt inappropriate considering the seriousness of the talk.

Luckily I didn’t have that problem when I met STAR_! Who I guess goes by ster these days, every since fully committing to Overwatch. Ster was one of the most popular TF2 streamers back in the day, and the first person I ever subscribed to on YouTube (He’s also the subject of one of my favorite moments in TF2 history). I used to watch his stuff every day it came out, and during a lull in the event I got the chance to shake his hand and thank him for the profound influence he had on my life. He made a video a long time ago discussing his motivations for becoming a YouTuber and encouraging anyone interested to take the plunge into content creation, and this was one of the things that spurred me to create The Daily SPUF, and later the tie-in SPUF of Legend YouTube channel. I never thought I’d get to meet him in person! 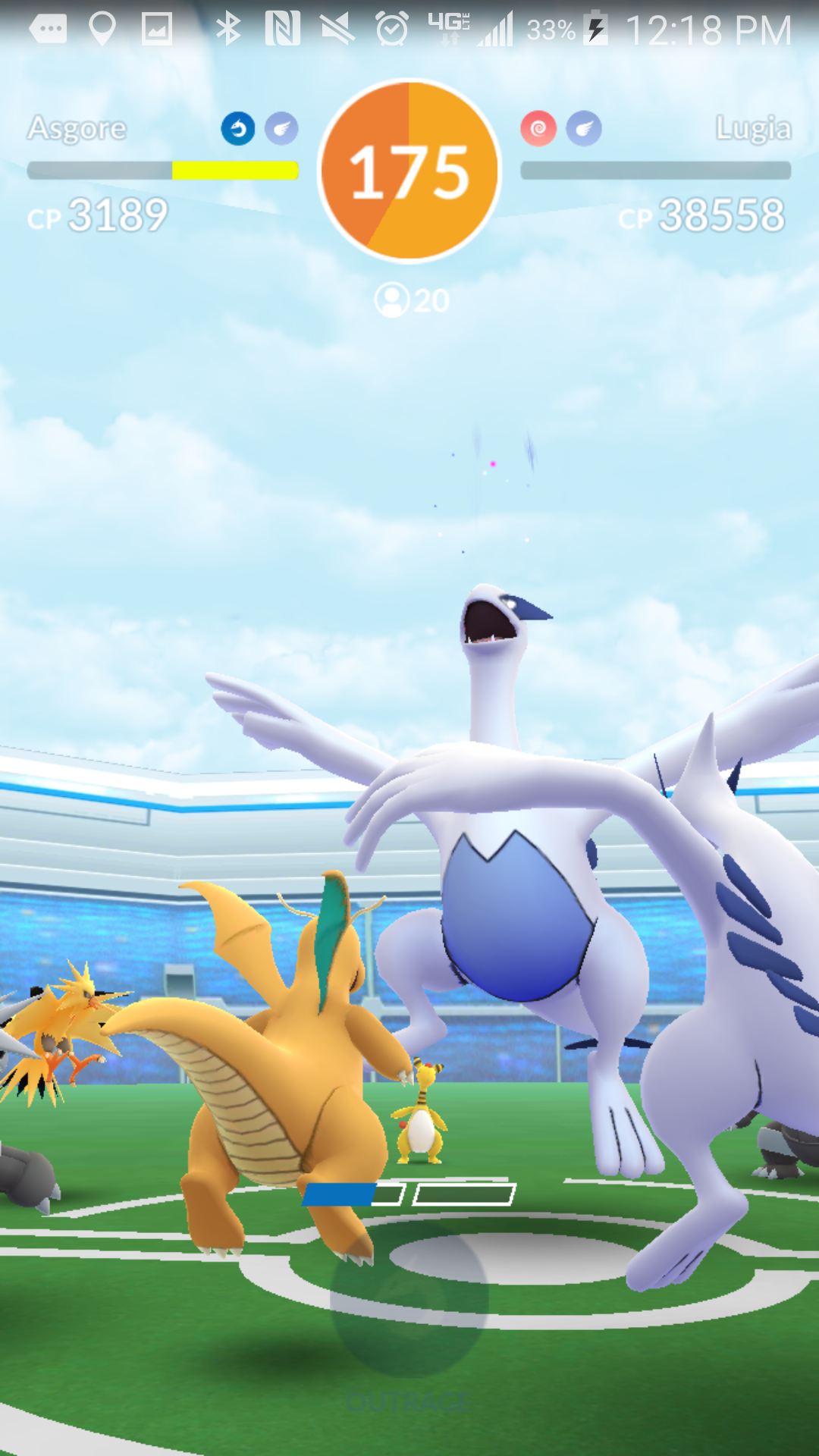 Speaking of firsts, I also got to catch my first legendary Pokemon in Pokemon GO! I never get the chance to do the giant five-skull raids because I’m largely a solo player, but when a Lugia spawned in the middle of the West Hall gym, I got to see what I’ve been missing out on. Niantic also had special Pokestops setup to lure people to their booths in the South Hall, and Unown were spawning for some sort of ARG event I noticed on the subreddit but didn’t pursue, and finally the last day had a Slakoth swarm. It was a pretty good day for my Pokedex overall!

Niantic was far from the only company with a booth in the South Hall. The entire bottom floor was a showroom with over a hundred booths where companies showcased their upcoming games and discussed the possibility of hiring. I got along really well with a talent agent from Sweden, so I end up moving there, you know why. 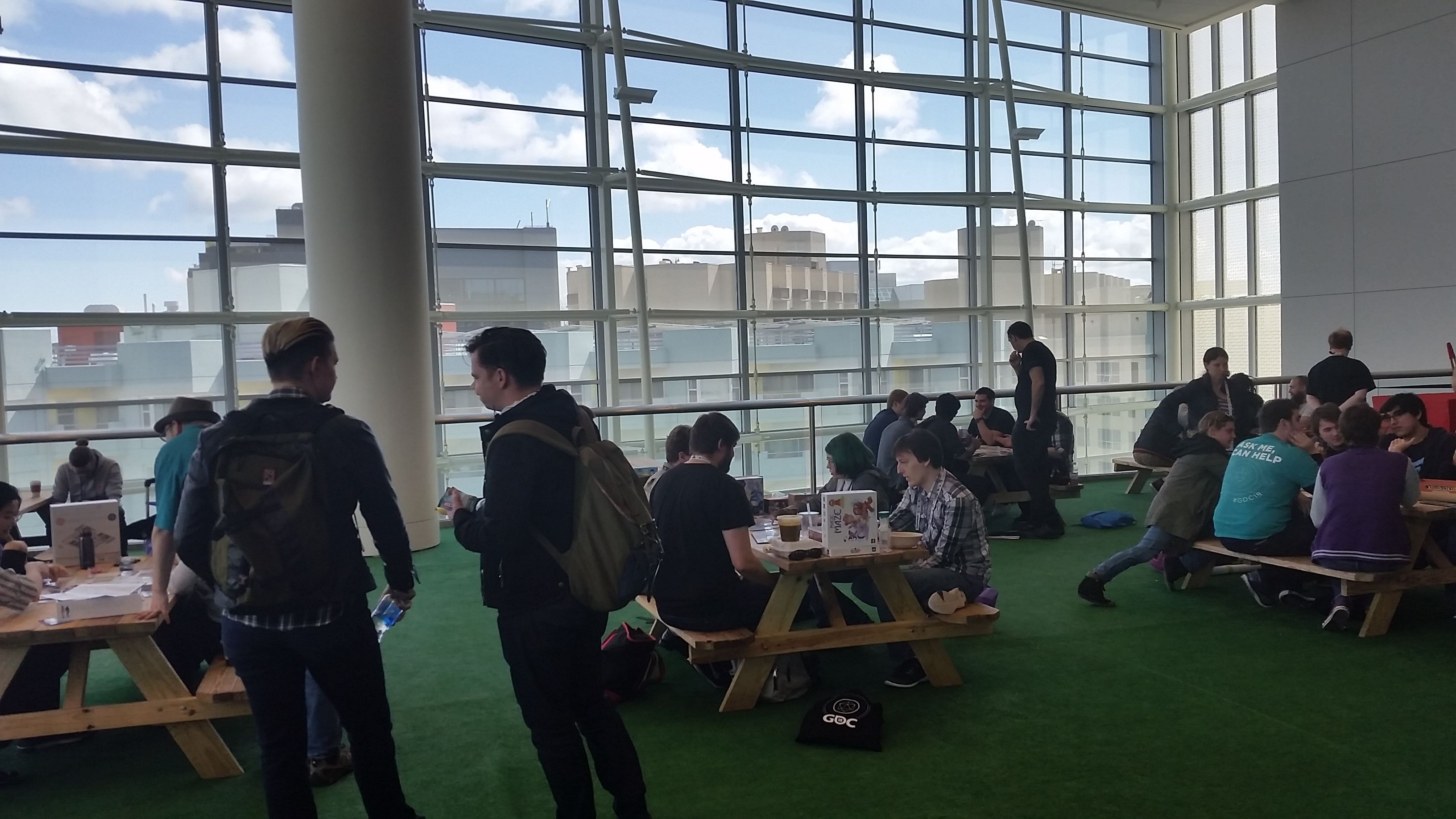 Video games weren’t the only thing happening at GDC; an entire section of the North building was full of benches housing different board games! My personal favorite was Secret Hitler, a hidden-identities game ala Mafia where the players assume the roles of post-WWI German politicians passing legislation and electing presidents and chancellors. Several players are secretly fascists, and one is secretly Hitler, and they win if they either pass a majority of fascist laws or get Hitler nominated Chancellor. I probably should have tried playing without using a comically fake German accent because everyone kept automatically assuming I was a fascist, but it was too fun to resist. Bloodbound is another game I encountered that I really loved, but I plan on dedicated a full article to it so I won’t go into detail here. (Update: Article here!) There were also lectures devoted to board game design, my personal favorite was by Rob Daviau, the man who invented the ‘legacy game’ genre. Legacy games are ones that get physically altered every time they’re played; cards will be ripped up, stickers containing new rules will be discovered and pasted into the rulebook, and board-altering secrets are hidden inside envelopes that are only to be opened once certain multi-game requirements are met, and they can never be closed again. It’s a fascinating premise for a genre, and he talked at length about what he’d learned from his earlier titles, Risk Legacy and Pandemic Legacy, in designing his newest game SeaFall. 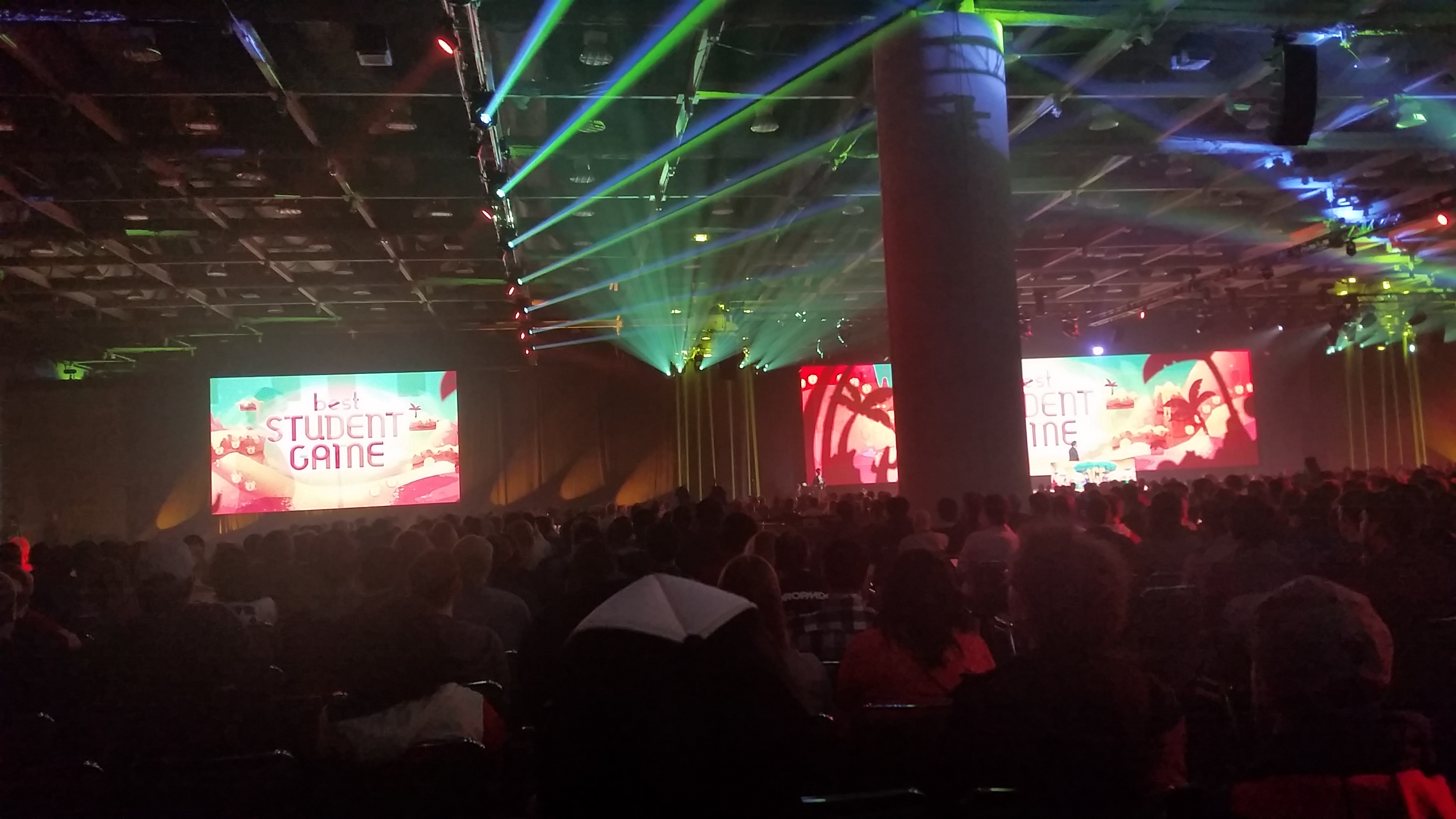 One of the last highlights was the award ceremony. There were two this year, with the Independent Games Festival awards being announced immediately before the Game Developers Choice awards (which is open to games of any sort, not just indie titles). Baba is You and Night in the Woods were the award darlings in the Indie circuit, and Breath of the Wild was rightly the dominant game for the AAA titles. The one-scene wonder of the ceremony was Tim Schafer, who won a Lifetime Achievement Award and gave one of the best acceptance speeches I’ve ever seen.

And last, but not least, a shoutout to the Ubisoft Montreal booth! Not only did I get to apply for a marketing internship position with Ubisoft San Francisco (fingers crossed) and play Far Cry 5 at one of their demonstration booths, I also got to try free samples of maple taffy, a Montreal snack involving thickened maple syrup wrapped on snow and stabbed through a stick. You have to eat it super quickly before it melts, but it was insanely good.