IMPORTANT INFO
Where: mixer/Smackus_Maximus
When: Saturday at 2pm PST

Hi everyone! Oceans Infinity‘s third public playtest will be going live this Saturday at 2pm PST! We’ve been hard at work adding new features, the biggest being a transition system allowing viewers to control Gaston!

Until now, the game was only playable with a streamer to control the thief, Gaston. The viewers could only play Gaston’s nanobots. But now, if our stream team is offline, the game can continue to play by randomly selecting one of the viewers to take over Gaston. That player can then choose to enter the bank and begin heisting, or pass and let somebody else take the lead.

Or at least, that’s the goal. The system has worked in private playtests, but you never know how these sort of things play out when they see the light for the first time. That’s why we’re having a public playtest! 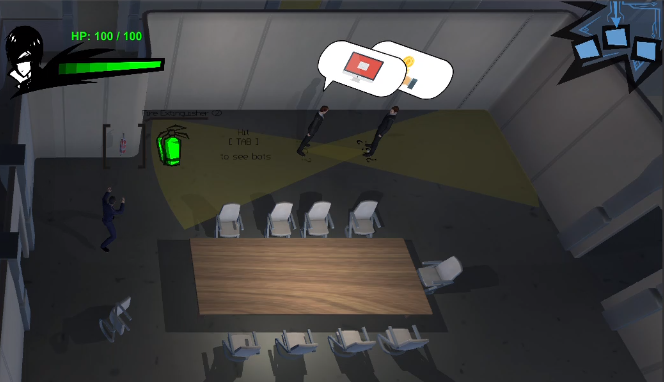 But that won’t be the only new content we’ll be showcasing. We’ve added the initial prototype for a new classification of enemy. If you want to keep up to date on future playtests and learn about upcoming content as we develop it, follow our Twitter account!

If you want to see some older gameplay, check out our demonstration for The SPUF of Legend:

The game will be streamed from mixer/Smackus_Maximus, and will feature me and Pat, our project’s Creative Director. Join us Saturday at 2pm PST, and let’s turn Gaston’s nanobot cloud into a swarm!