Pokemon GO is experiencing a booming renaissance after Niantic added several awesome features that augment the core gameplay. The research quest mechanic gives players constant goals beyond simply catching Pokemon, and the new Adventure sync system that links Pokemon Go’s progress with your fitness app of choice is encouraging players to use the app to get fit. The slow rollout of Gen IV and the imminent PvP mode is creating all sorts of buzz.

But its also bringing in a lot of players who don’t know the core elements of Pokemon GO‘s battling system. It’s pretty easy from a surface look, but there are loads of little ways to optimize your Pokemon so they can be the very best. Let’s cover the basics. Every pokemon is either one or two types, which cannot be changed except through evolution to a new Pokemon. These 18 types have an ambitious rock-paper-scissors relationship that I’m assuming you already know (If not, this is my personal favorite graphic for studying it). There are three schools of thought regarding what move types to teach Pokemon: 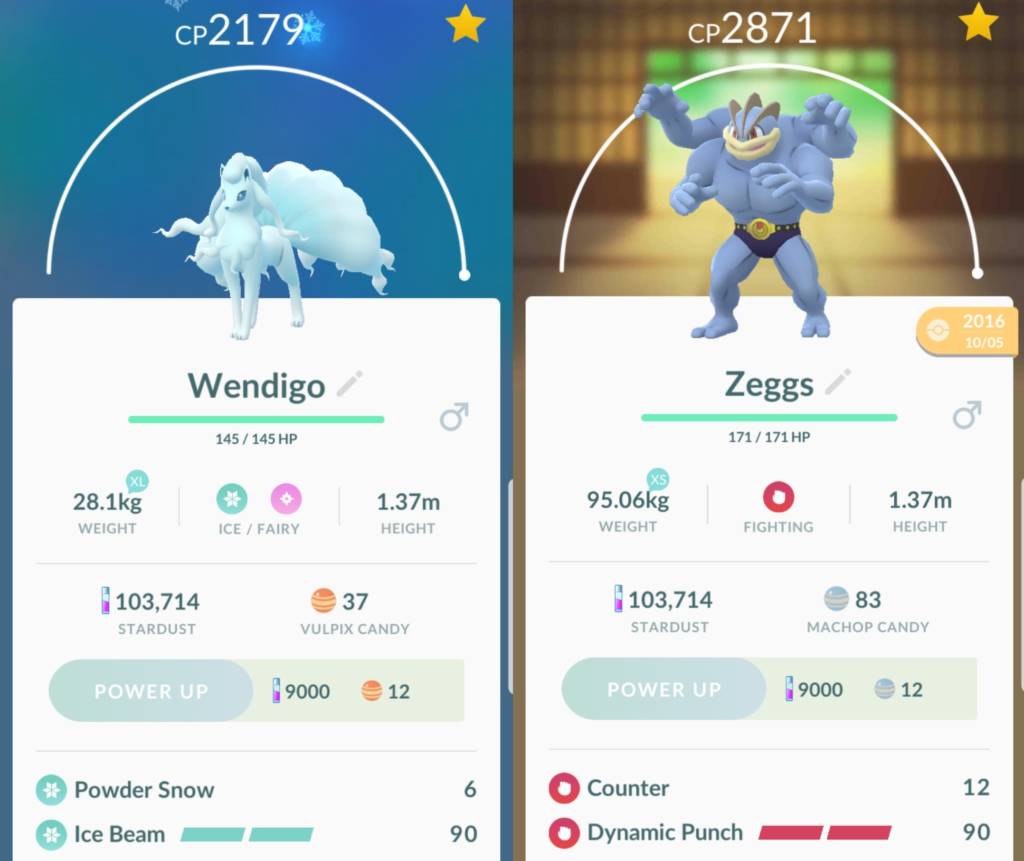 1- Often, you’ll want Pokemon to know moves of the same types as itself. The game actively rewards doing this through a damage boost called “Same Type Attack Bonus”, or STAB. When building these Pokemon, you’ll often have specific targets in mind; this Alola Ninetails was crafted to counter Dragonite, Salamance and Alola Exeggutor due to dealing super-effective damage while also double-resisting their types. Anyone’s first order of business should be to get a powerful fully-dedicated Fighting type like Machamp since Fighting is the most important counter to all three of the core gym defenders. 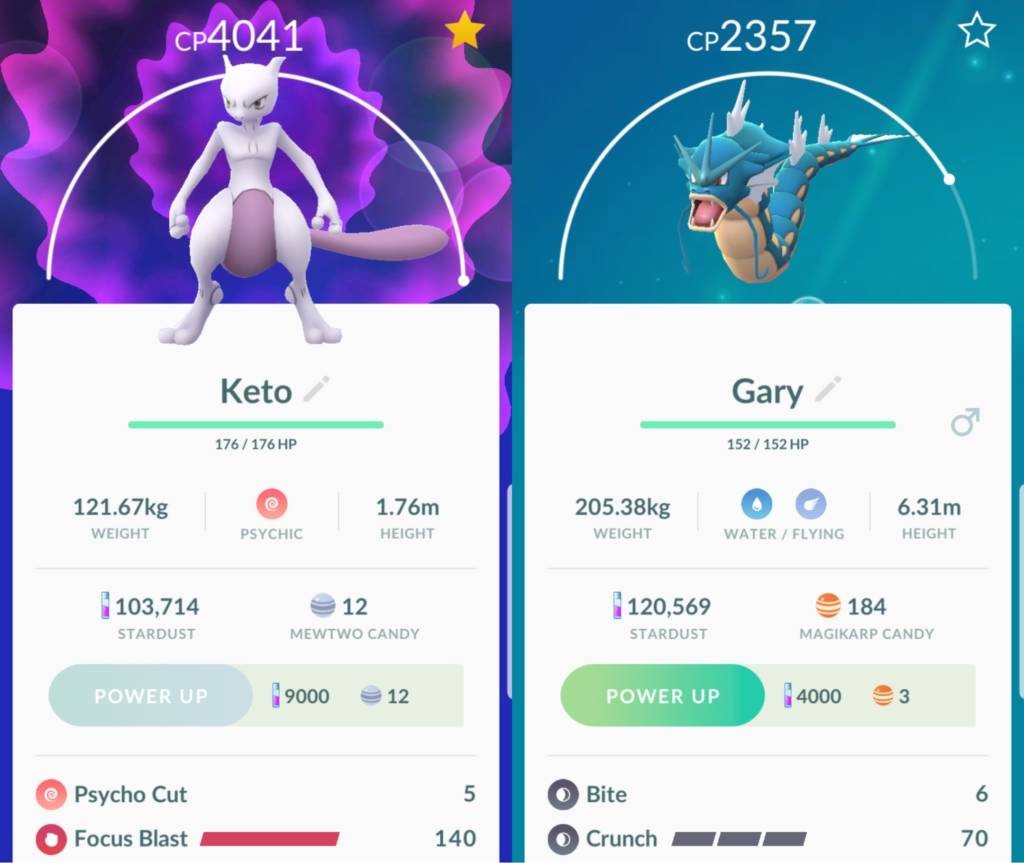 2- Certain Pokemon can be specced without STAB so that their moves are super-effective against Pokemon who would normally counter that type. Blissey is a top-tier Gym defender who is weak to Fighting; however, Blissey knows several powerful Psychic and Fairy-type moves that counter Fighting. This Mewtwo can pepper Blissey with super-effective charge moves while shrugging off her attacks in a way a fighting Pokemon can’t. You might also ignore STAB when just starting out and still looking for good Pokemon of the meta-relevant types; “Blue Tyranitar” is the community nickname for a Bite/Crunch Gyarados since the species has a high enough attack stat that it can pinch-hit if you haven’t evolved the king of Dark types yet. 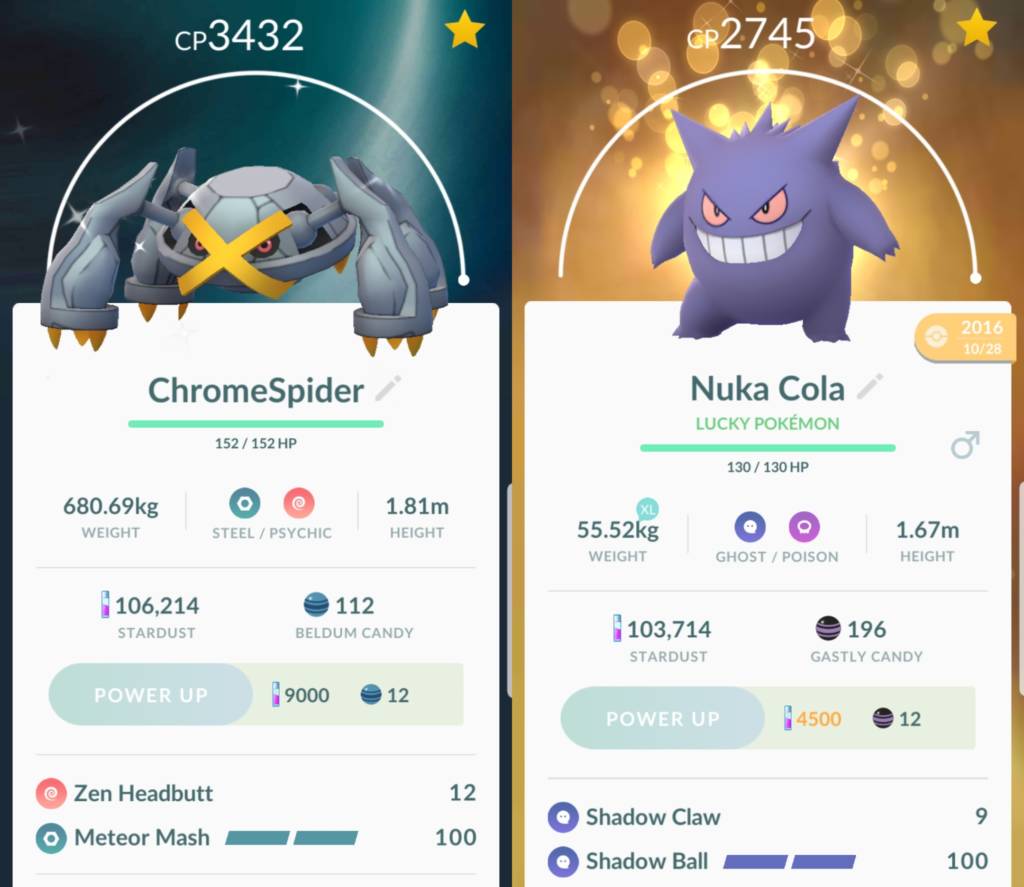 3- And finally, some Pokemon can be specced out as generalists, dealing good neutral DPS regardless of who they’re fighting. They often use a mixture of Ghost, Dragon, and Steel moves due to those types having great coverage and few weaknesses. Metagross enjoys the tankiness of a Steel-type with the power of a Psychic-type, while the more single-minded Gengar is a glass cannon who can put out some insane damage in its short lifespan.

Now that we’ve covered the typing of moves, let’s say you’re researching a Pokemon and it has multiple possible moves of the same type; which one should you choose? Well, again, there are different schools of thought about choosing between different moves of the same type. The first, of course, is selecting the move that deals the most damage-per-second (DPS). These moves tend to hit hard, hit slower, and have longer animations, but will still kill your target faster than the alternatives. This is the ‘default standard’ for selecting the ideal move, and if you’re willingly choosing against DPS, it’s probably for one of these two reasons:

A- If it’s a Fast move, you might choose a lower DPS move if it has better energy-per-second (EPS). If you’re expecting your Pokemon to deal the majority of its damage through Charge attacks, pick the fast move that powers up those Charge attacks fastest. These moves also often have quicker animations, facilitating dodging enemy attacks.

B- If it’s a Charge move, you might choose a lower DPS move if it has more bars. The more bars a move has, the quicker you can fire those attacks off, letting you easily incorporate dodges into your attack pattern or wear down a weak opponent (or save those bars up and quickly burst down the next in line once this defender dies).

With all that in mind, here are a few ways you could spec out a Pokemon: 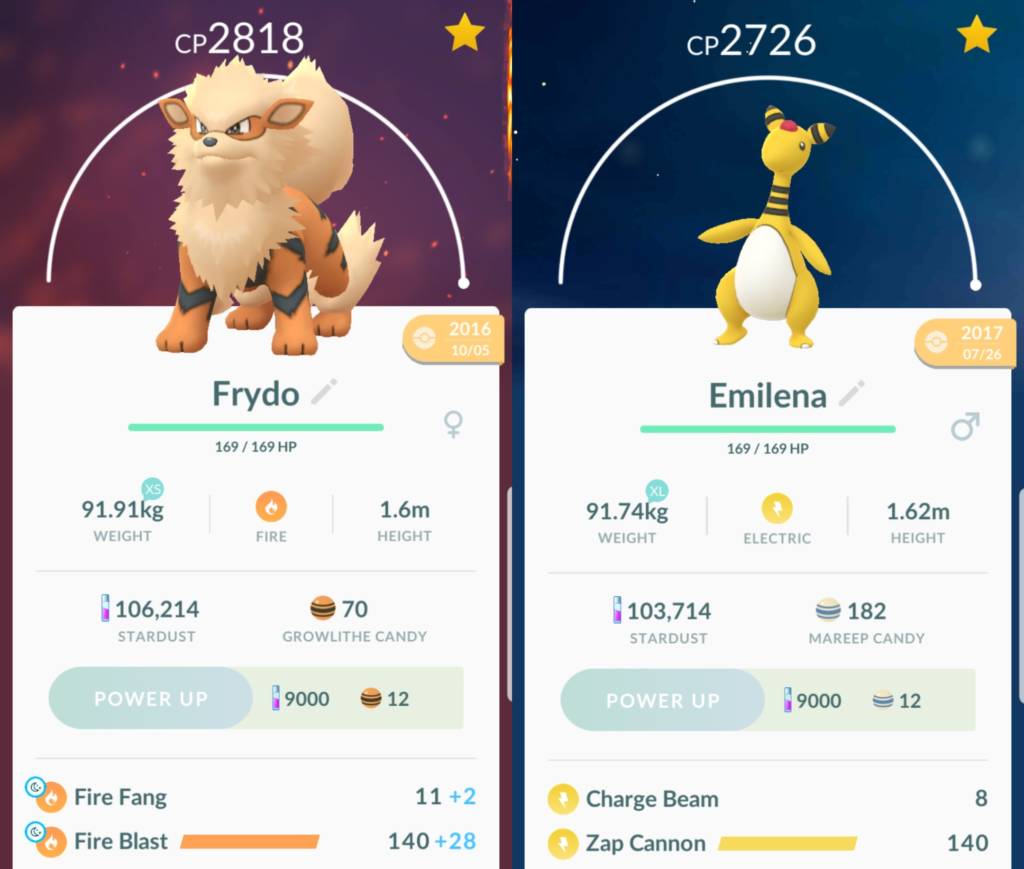 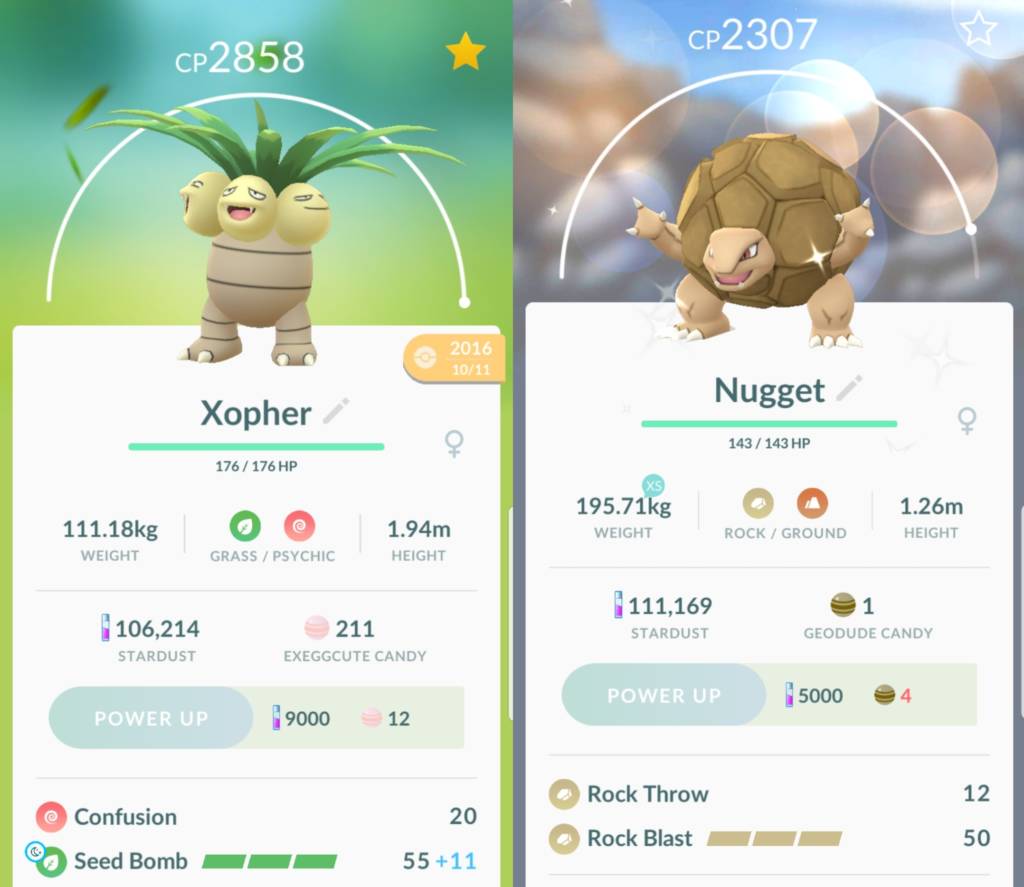 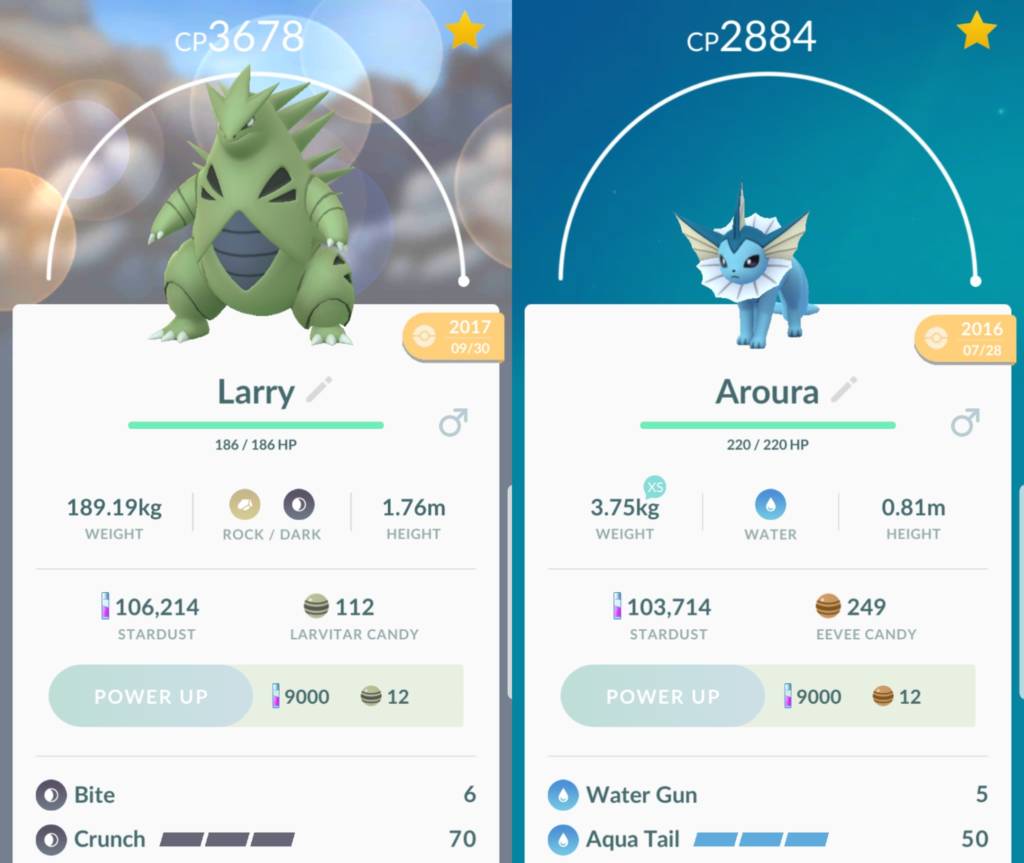 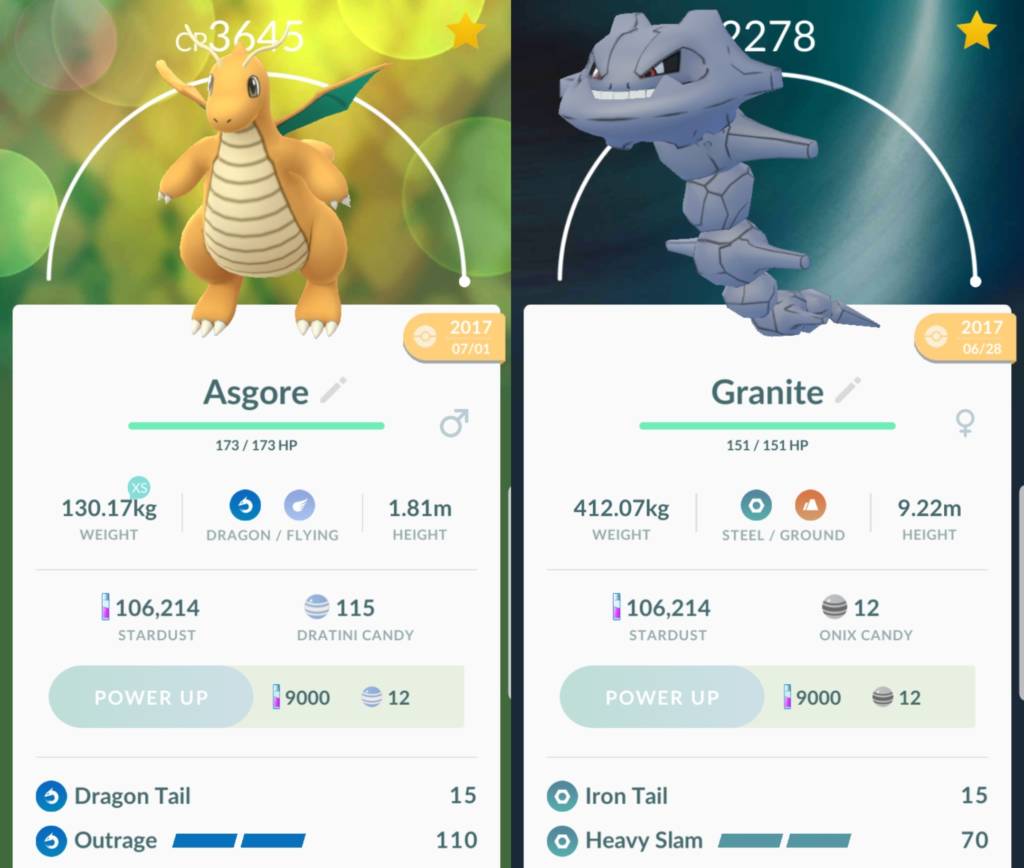 These are, in my opinion, the ideal ways to spec out a Pokemon. Obviously, that will not always be possible since you must work with available movesets and desired move types. But on a general level, these are the things I keep in mind when looking at my best Pokemon and what moves to give them. If you’re more interested in defending gyms, rather than defeating them, check out my previous article. Good luck, and happy battling!