The next generation of Game Development Master’s students have started their program (I graduated!) and one of their first assignments is to make a mod for a pre-existing board game. I didn’t get this assignment in my year, but I happened to have already made one back when I was in high school, and the professor asked that I upload it somewhere so he could use it an example. On that note, hi everybody from UCSC Games & Playable Media class of 2020!

A Monopoly game for two to four players

General Strike is a board game played on a typical Monopoly board, with slight adjustments. The workers of New York are on strike, protesting the rampant monopolizing and disregard for their personal rights.  In haste, the army has been called in to help the police stop the revolt. Play on either side, and lead the charge to fight for your basic rights, or maintain the peace.

There are four factions, and two factions are each on one team:

Team One: The Strikers

Lay the Monopoly board on a flat surface, and take out the following pieces:

The other equipment will not be used.

Place the money, houses, and hotels in an easily accessible location. The Police pieces (car, horse) will be placed on Free Parking, and the Army Pieces (cannon, ship) will be placed on Go To Jail. The Strikers will all go on the Reading Railroad space; the Homemakers (iron, thimble, dog) left of the crease; the Workers (boot, hat, wheelbarrow) right of the crease.  Also place a hotel on Reading Railroad. Both Law players will receive $1,000 and a Get out of Jail Free card. 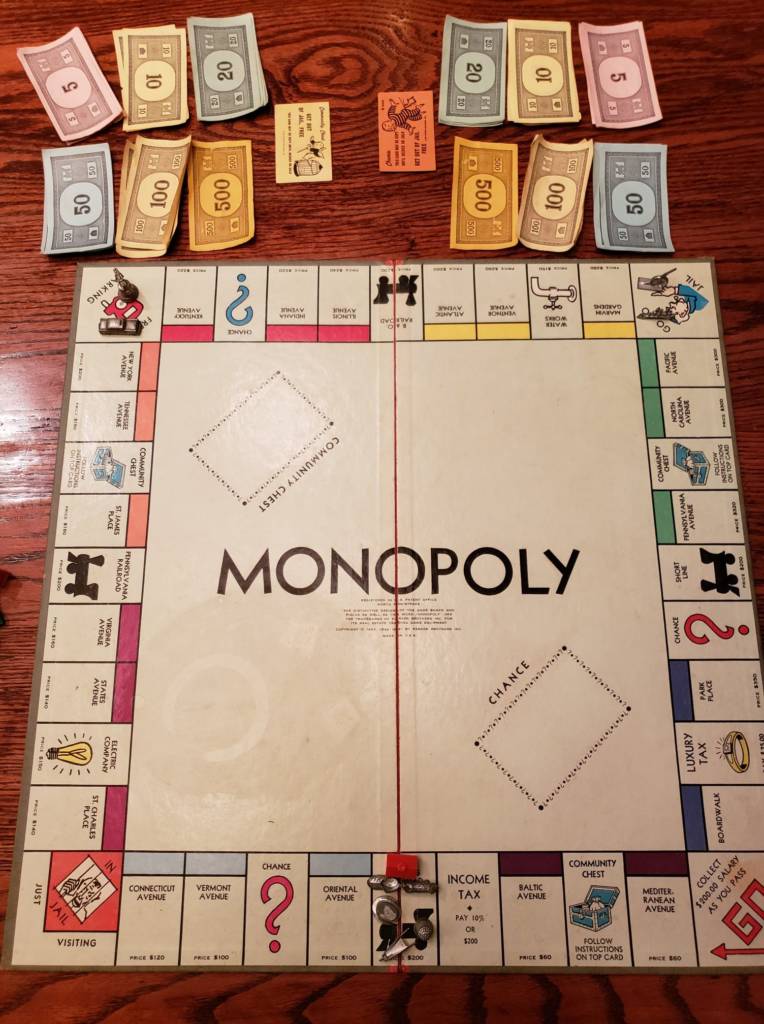 For simplicity, the sides of the Board will be referred to by their cardinal directions. The top of the board, with the red and yellow properties, is Northern New York; the left side, with orange and pink properties, is Eastern New York, and so on. Most of the instructions on the various spaces, such as Chance or Luxury Tax, can be ignored (These workers are on strike, they’re not stopping to pay taxes!) The only important spaces are Properties, Railroads, and Utilities (Electric Co. & Water Works). Free Parking and Go To Jail are also important, but only because they are the home bases of the Law Classes.

The orders of turns are as follows: The Strikers on the same turn -> the Police -> the Army -> and back to the Strikers.

The Strikers go first. On their turn, they will roll both dice. The two players will decide who will get each number. Both players get one of the dice numbers, and it must be used. To use a dice number, the player will pick one of his playing pieces and move it the specified number of spaces. In general, the Striker’s pieces can only move in one direction; the Homemakers must move their pieces left towards Jail, and then up towards Free Parking. Workers move right towards Go and then up towards Go To Jail. Railroads are the exception (see below). 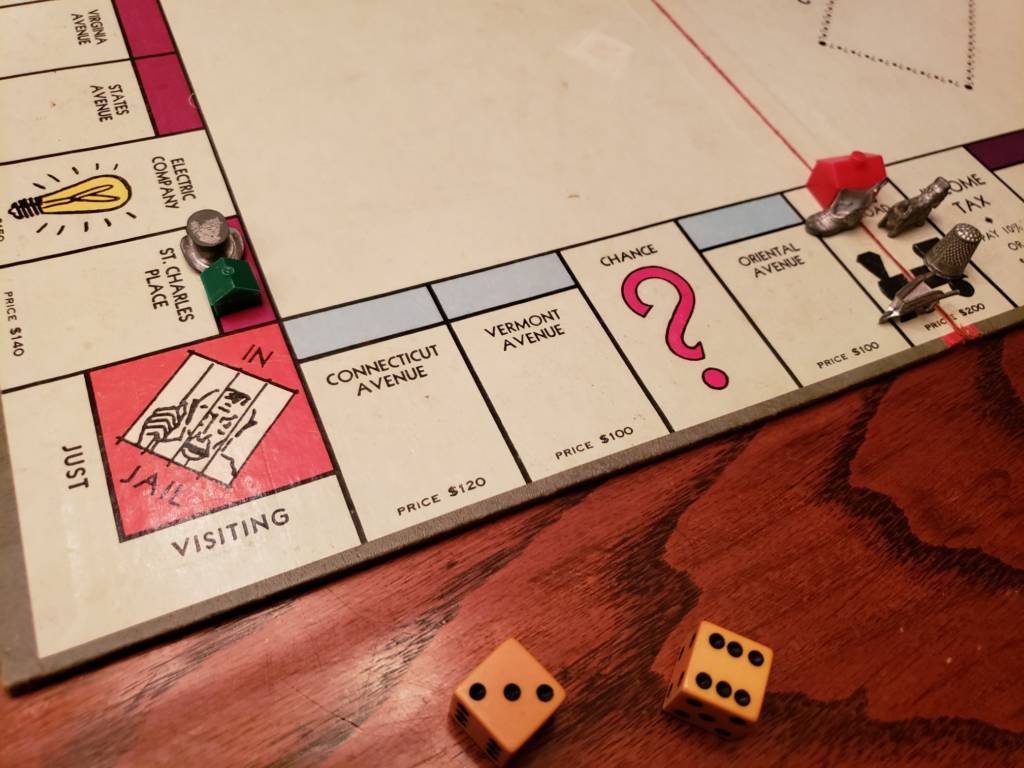 When a Strikers’ piece finishes its turn on a property, it establishes a stronghold (represented by a house) on it.  The house is placed, like in normal Monopoly, on the colored bar on the top of the property. Also, only for the turn it is made, it shelters in the stronghold, which is represented by placing the piece on the colored bar next to the house. (Note: Sheltering is an option, not a requirement. Its rules for qualification are flexible. If a Striking player ends his turn and forgets to place his piece on the colored bar, representing shelter, then he must leave his piece exposed. Likewise, if a Law player fails to notice if a Sheltering piece remains sheltered for longer than a turn, the piece cannot be unsheltered until the Striker’s next turn.) There can be up to four strongholds on one property; after that, a Striking piece that lands there merely hides in one of the already-established ones.

If there is only one Striking piece remaining on the board, the rules change slightly. That Striking piece may move in either direction each turn. (Remember, once one of the opposing Law pieces is defeated, this special ability is lost.)

After both Striking players have each moved their one piece, their turn is over.

The Law’s pieces are much different from the Strikers’. Unlike the Strikers’ pieces, which all move and act the same, the Law’s two pieces perform different functions.  Both teams have one Scout piece (the cannon and the horse), and one Troop piece (the car and the ship). On each turn, the Law player can choose to use either the Troop Piece or the Scout Piece.  One must be moved every turn; if the Scout Piece is destroyed, the player has no choice but to raid with his Troop Piece every remaining turn of the game. 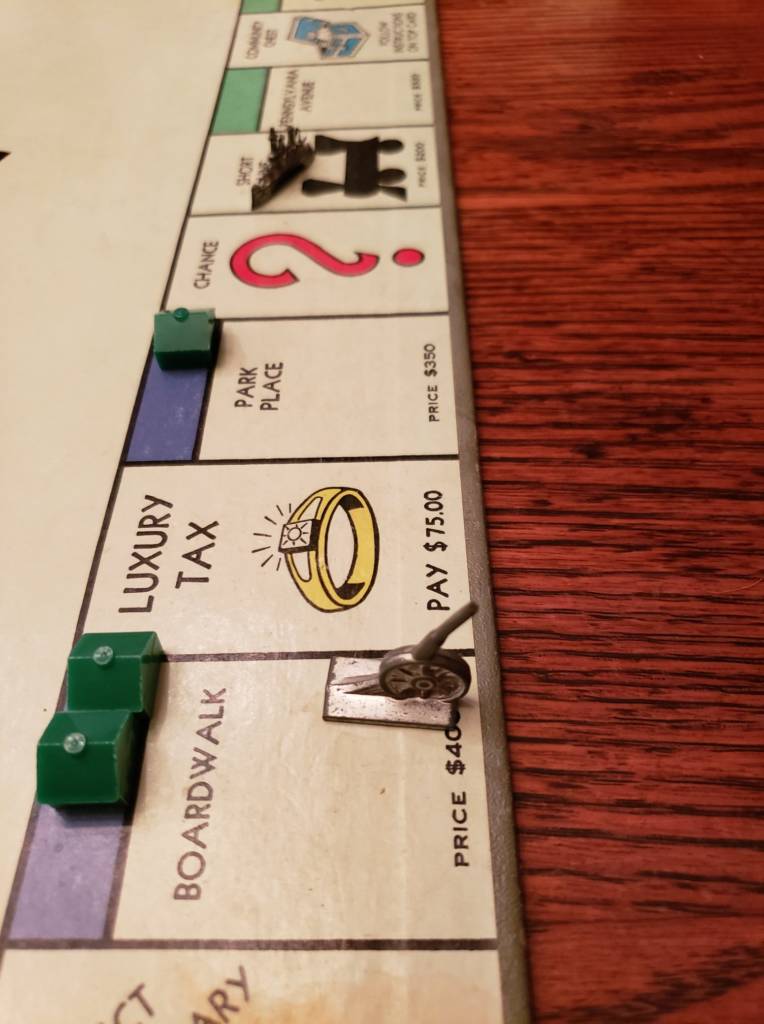 Raiding with the Troop Piece: The troop piece is the primary piece of the Law teams.  It is the piece that deals with money, and the piece that marches out and attacks the enemy. When using a Troop piece, the player should first decide which direction he is going to send his troops. His troops can only march in one direction (a.k.a. down one side of the board)

If you choose to send out your troops, then choose whether to roll two dice, or just one.  Once the decision is made, roll your chosen number of dice. The total of dots is the number of spaces your Troop piece will move.  Move your Troop piece down the chosen aisle, checking each space you cross through. Each time you land on a path with strongholds, remove all strongholds. If you land on any spaces with unsheltered Striker pieces, remove them from the board. They have been destroyed.  (Note: If you roll an 11 or a 12, you may only move 10 spaces, to the bottom of the board.)

Once you have moved the allotted space, drag your piece back to its starting base.  The troops have returned from their raid.

The costs are different for the Army and the Police: 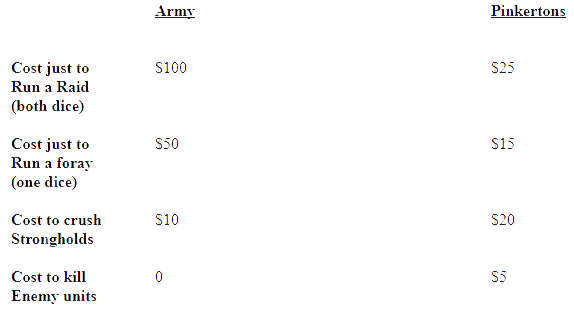 If your Troop piece destroys a stronghold with an enemy piece in it, the Striking piece is cast into the streets, but not destroyed.

If there are more strongholds on a space than there is sufficient money in your funds to destroy them all, merely destroy how many you can, then pull back ending your turn. Any sheltering Striking pieces remain protected.

After totaling up the final bill, pay that amount to the bank. Your turn is now over.

Reconnoitering with your Scout Piece: Your Scout piece is different from your Troop piece, in that it does not fight, but instead scans the area ahead and finds other available base sites to station the Troop piece (corner squares).  If you decide to move the Scout piece, roll one or both die. By adding or subtracting together the two numbers on the die, decide what number of spaces you will move. For example, if you roll a three and a one, you may move 2 (3-1); or 4 (3+1). Then move your Scout piece in that direction. Your goal is to land your Scout on one of the corner pieces (using exact count).

But be careful! The scout is traveling through Striker territory. If it ends its turn on a space that is not a property, it has nowhere to hide, and is exposed. On later turns, if a Striker piece ends its turn on that no property space, your Scout is discovered and destroyed. However, the scout is protected on corner squares.

Once your Scout is in position, you can start moving your troops to their new base.

Relocating with your Troop Piece: Now that the Scout has surveyed and prepared an alternate base station, you now have the choice to move your troops to their new base.  This will open up new firing ranges, and can hopefully further expose the enemy.

To begin moving, choose to roll two or one dice. Add the sum of the dots, and you will move that far. However, unlike your Scout, the Troop piece is bulky and large. For non-property spaces, you will need to use up two moves instead of one to continue. This will lower the amount of space you can move per turn.

While moving, the Troop piece can only move in the direction of the Scout piece. It cannot switch directions.  Once it reaches (not necessarily by exact count) the space with the Scout piece (which is not allowed to move while relocating is going on), it is relocated, and may raid or foray the next turn.

Each turn, after moving, you cannot fire at the enemy, since your troops are not prepared for battle, and will not be until they have a home base.  However, your exposed armies cannot be harmed by the enemy, or by friendly fire.

Utilities: Waterworks and Electric Company are the two Utilities, of course.  However, they play much different roles during a General Strike. They are now targets for the Strikers, to be controlled.  At the beginning of the game, both utilities are running cleanly; the Electric Company is supplying the Police with power, and Waterworks is supplying the Army with a fresh supply of water.

In addition, the utility has become a safe house for the Strikers, since the Law cannot afford to destroy those utilities and cripple New York.  A red hotel is to be placed on a Utility that is captured, as a permanent safe house for Striking pieces. Pieces hiding in a red safe house are free to remain for as long as they desire without fear of destruction.  (However, once they leave the safe house, they must still move in the same direction, unless it is the safe house on Reading Railroad.) 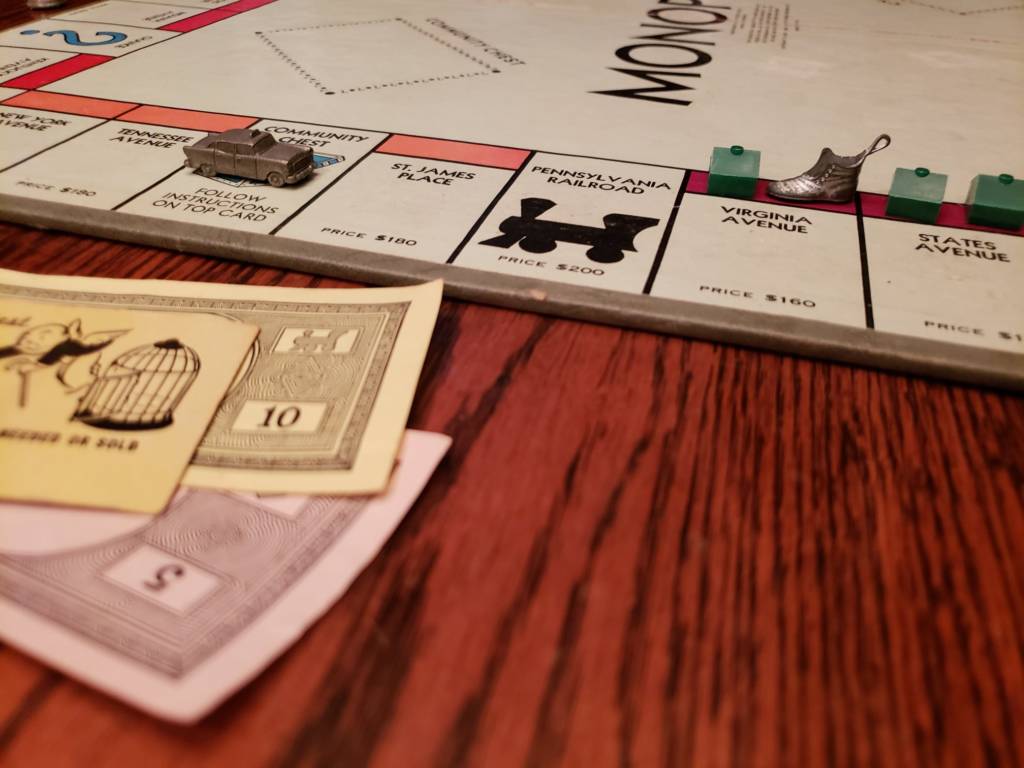 Get Out of Jail Free: Near the end of the game, you may find that you still have money, but not enough to launch a raid or even a foray.  If this happens, you may use your Get out of Jail Free card. With it, the government intervenes in your favor, giving you just enough money for a final Raid (not a foray). Roll both dice, and move your Troop piece, removing what enemy pieces you can free of charge.  Once your raid is over, if there are still Striking pieces on the board, you have failed, and must evacuate the city. Pull your pieces off the board, and hope your partner will be able to save the day on his own.

The teams claim victory through different means. The Law wins if all of the Strikers’ pieces are removed from the board; the General Strike has been broken, peace has been restored.  The Strikers win if the Law runs out of money; the Law must then withdraw, and the factory owners will have no choice but to concede to the Strikers’ demands.

Either way, the Strike has ended!  Another chapter of New York history has been written!