While I only started writing articles about Pokemon when Pokemon GO was released, I’ve been playing the core games since 2009 when my boyfriend gifted his copy of FireRed to me. The single best part of Pokemon is how it eases the player into falling in love with their own personal monsters, and subtly guides you to create a unique team that will wind up completely different to everyone else’s.

Pokemon has also gone above-and-beyond at making sure players can always port their beloved teams forward through new generations of the games. Through features like PokeTransfer, Pal Park, and Pokemon Bank, I still have most of my favorite ‘mons from every game back to Gen III, which was when I started playing. With the newly-released Pokemon Home, I can even access them on my phone!

However, no system comes without exception, and several lost souls didn’t survive for various reasons. Since Pokemon Home put me in a nostalgic mood, I just wanted to dedicate an article to the ones that aren’t here today. 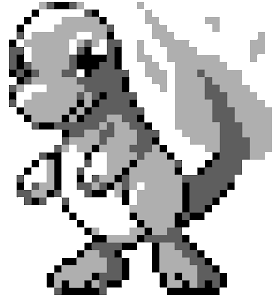 FireRed wasn’t actually my first experience with a Pokemon game; in 2004 I got a single lunch period to play a copy of the original Red on somebody’s GameBoy at school. He started a new game for me but clarified I wasn’t allowed to save (since it’d overwrite his playthrough) so I didn’t even reach the point where you could catch new pokemon. I didn’t take it super seriously (hence Charmander’s silly 10-character-limited name) and it left almost no impact on me except the memory, but ChrisHanse is technically my first ever Pokemon (and my shortest-lived). Though he was doomed from the start even if he hadn’t been born in an unsaveable game; Pokemon Red and every other game from the first two generations were not forward-compatible with all the gens that came afterward.

Many years passed between ChrisHanse and my next foray into Pokemon, but that did mean I got to play through multiple generations one-after-the-other. After beating FireRed, I played through SoulSilver (and liked it even more!) before tackling Ruby, the first game where I couldn’t rely on the original 151 Pokemon and had to try something new. Unfortunately, I quickly discovered the game cartridge I’d purchased was not up to snuff; it wiped my save file whenever I tried to play a different game, it wiped my save file if I accessed the DS settings, and sometimes it’d wipe my save file for no reason whatsoever. Unfortunately, I discovered this while studying abroad in Great Britain, which made it impossible to easily replace it with a new one. Instead, I resolved to try and speedrun the game, if only to experience something different from the slow-and-methodical process I’m comfortable with.

It was certainly a different affair than I’m used to; I ignored the Pokedex, ignored side quests, ignored any Pokemon that didn’t fill an immediate and valuable role on my core team (The Linoone was my HM Slave and potion finder) and blitzed my way through story objectives with the single-minded drive of a Cohen Brothers character. A mere two weeks after starting my final attempt, I marched my only six Pokemon up to the Elite Four and curbstomped them. Then, using my boyfriend’s copy of Pokemon Diamond, I hurriedly set my team up for transfer out of the tainted cartridge, selected the “Migrate” button…and the save file wiped in the process. It was never to be. Rest in peace Chiquita the Blaziken, Brenda the Breloom, Hangry the Sharpedo, Starla the Gardevoir, Cassie the Salamance and Pickup/HM the Linoone. 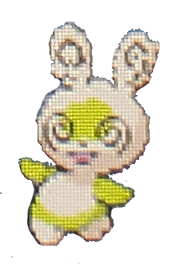 After recovering from the loss of my Ruby team, I continued playing through the generations, starting with Platinum, then Black, and entering Gen 6 with Pokemon Y. After that, while waiting for Gen 7, my boyfriend started toying around with websites that let you generate your own Pokemon with corrupted or crazy stats. He mostly used it to create useful things like shiny legendaries, 6 IV Ditto or Hidden Move meta-fighters, but I set my sights on wilder pastures and created the weirdest pokemon I possibly could to spearhead my retro-run of Black 2. And thus, Spandex was born. 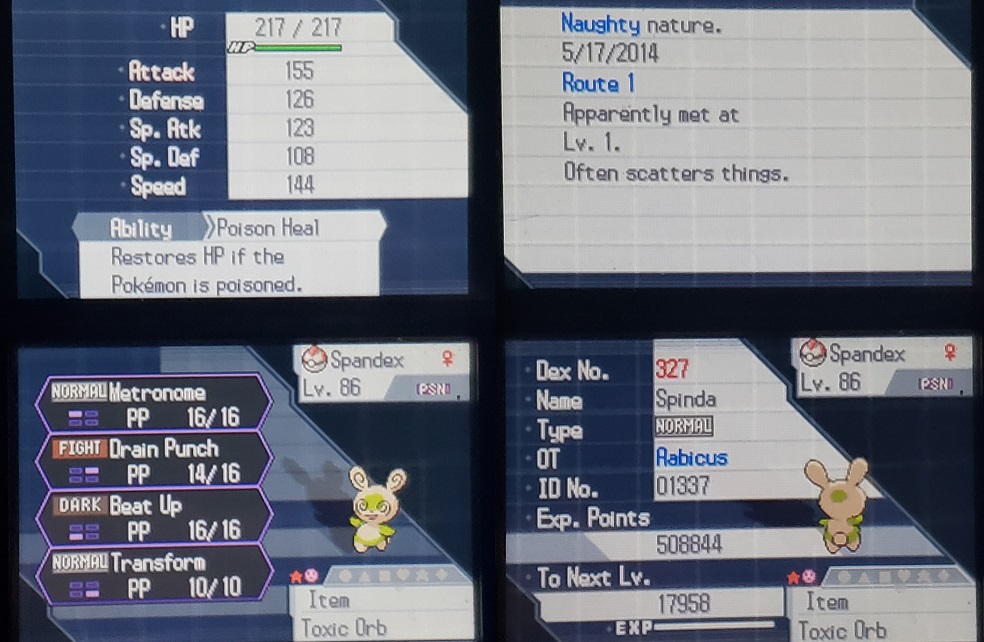 Spandex held a Toxic Orb, which immediately poisoned her, but thanks to her Poison Heal ability this meant she instead regenerated health every turn. Combine that with Drain Punch (which restored HP based on damage) and she was a health-regeneration machine. And when things got rough, she could shake-up the status quo by using Metronome to fire a randomly-chosen move from every possibility in the game, or even Transform to shapeshift into her enemy. This all made her a blast to use, and she wasn’t even overpowered because Spinda’s stats are among the most garbage in the history of Pokemon. She played like a drunken monk from an anime, getting repeatedly beaten to within an inch of her life but suddenly busting out random super-Saiyan attacks to regenerate back to full health. Unfortunately, Pokemon Bank quickly recognized that she was hacked beyond all belief, and she wasn’t invited to migrate forward into Pokemon Home with the rest of her team. Spandex remains alone in my copy of Black 2, spending her post-Championship retirement in silent meditation.

I have a pair of rules I always live by when playing Pokemon games: No using legendaries, and no using gimmick event Pokemon. I want my team to be on even footing with the NPCs, and I want my Pokemon to be transferrable out after I’ve finished the game. I’m not sure why I broke my own rule for Otaku, except that she was just so unbelievably useful.

When it came time to play OmegaRuby, I replicated the lost team that I used back in my Ruby days, but I dropped Sharpedo for the ultra-versatile Cosplay Pikachu unique to this game. Much like my favorite Pokemon Rotom, Cosplay Pikachu can swap out her outfit to gain access to a bunch of different moves that let her specialize as different types. This made her super versatile as she could swap her moves around to best counter the upcoming gym. Her compatibility with the Light Ball and usefulness in Pokemon Contests certainly didn’t hurt either.

Unfortunately I was setting myself up for heartbreak, since Cosplay Pikachu had always come with the caveat that she wouldn’t be transferrable out of her current game. I totally knew this, but it was easy to ignore until the time finally came that I’d beaten everything there was to do in OmegaRuby. When Pokemon Moon arrived in the mail, Otaku’s teammates solemnly bid her adieu and moved onto newer pastures.

But in conclusion, these exceptions prove just how solid the norm is. It’s pretty amazing that my list of lost Pokemon is this short considering how many survived the migrations from different games over different generations, on different consoles, using completely different hardwares. And every example on this list has an extenuating circumstance justifying why they didn’t make the cut; I’ve never lost a single Pokemon from transfer failure or any sort of bug/glitch that was on Nintendo’s end. That’s actually pretty incredible at the end of the day.