The throwable slot is a very important part of any heister’s inventory, with a lot of versatile options that complement any build. Throwables can be used as a fallback weapon when you need to reload, as an area-of-effect attack when you’re surrounded, as a focused high-damage attack for eliminating specific dangerous enemies, but it all depends on which one which one you bring. Today, we’re covering The 5 Best Throwables in Payday 2. 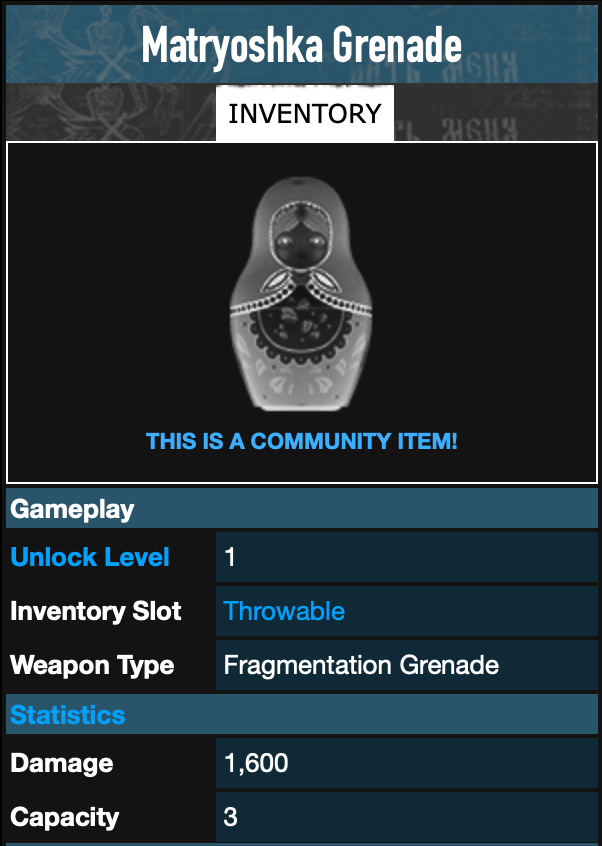 #1. If you want a standard frag grenade-style throwable, the best option is the Matroyshka grenade. All the frag grenade reskins have the same stats, except the Matryoksa which has a doubled radius of effect compared to the standard frag grenades. This makes them a straight upgrade. The only other possible option is Dynamite, which doesn’t have that doubled impact radius, but instead it is immune to police gunfire, meaning it’ll never blow up in your face when you try to throw it. 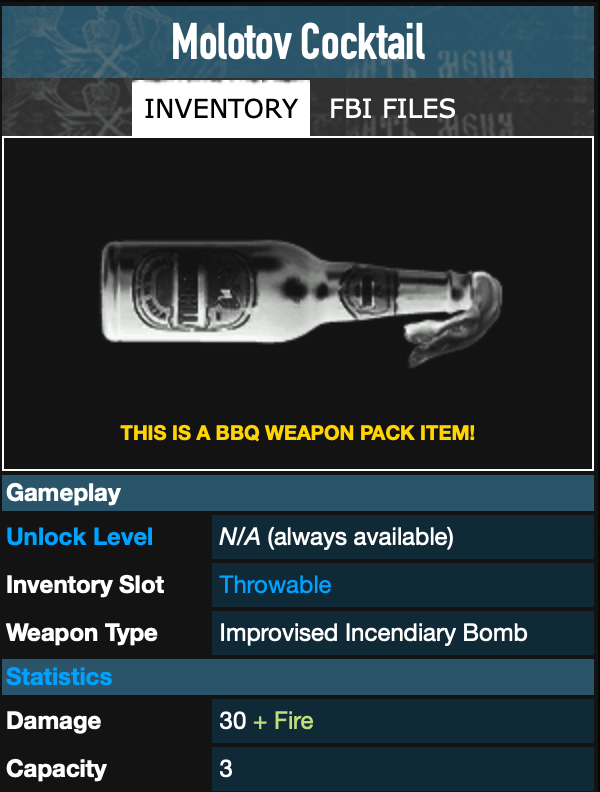 #2 is Molotovs, the best zoning grenade in the game. Molotovs light the ground on fire for ten seconds, which is a huge amount of time to zone out a single chokepoint. Cops within the fire are stunned and take continual damage, which essentially removes them from the fight but also prevents their respawn for a decent amount of time. Molotovs are also the weapon of choice for Grinder builds, and popular in stealth because you can silently self-damage to get the Yakuza speed boost. 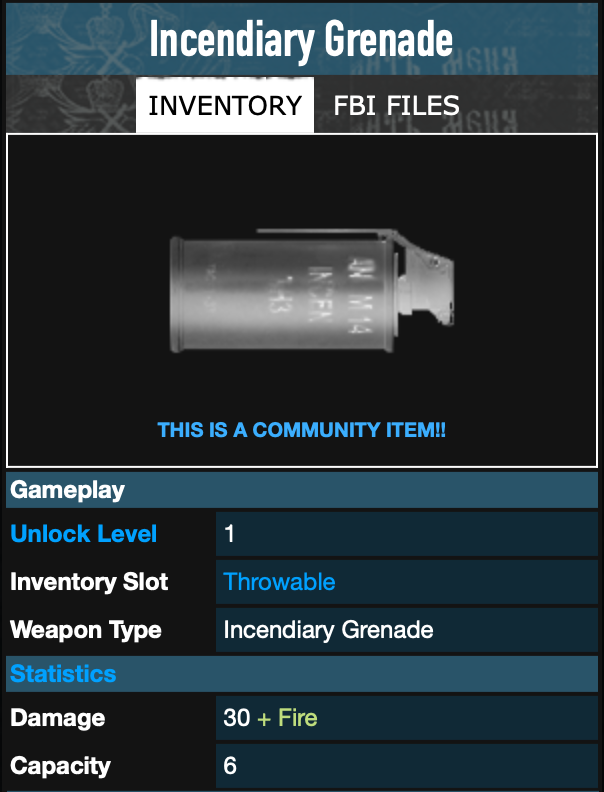 #3 is the Incendiary grenades, a middle ground between Molotovs and frag grenades and my personal favorite throwable in the game. It deals a blend of explosive and fire damage and doesn’t last nearly as long as the Molotov does, but the enemies will still play the full panic animation, giving you enough time to escape. You also get six of them, which is a lot more than most other explosive throwable options. 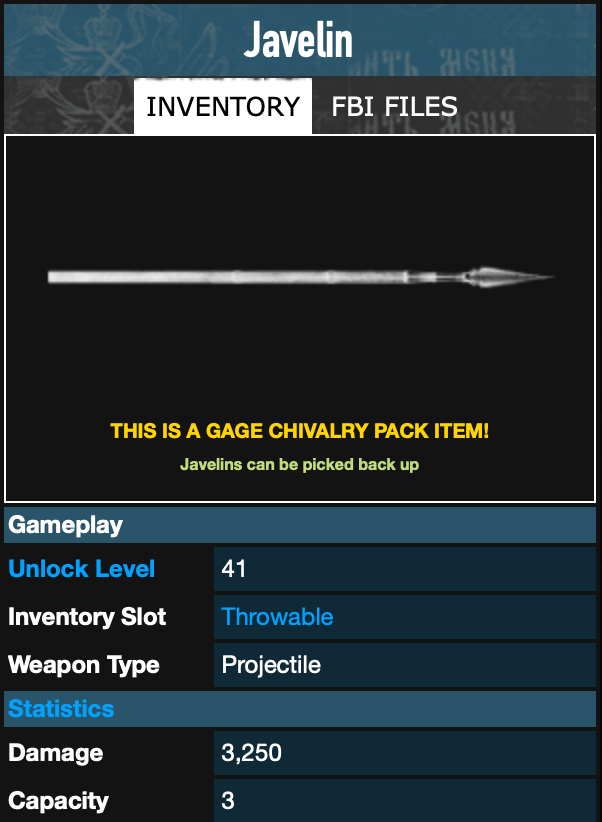 #4 Switching away from explosives, the Javelin is the highest-damage option of the single-target throwables. It deals a ludicrous 3,250 damage, letting it headshot-kill any unit in the game on any difficulty. You get three of them and you can retrieve thrown javelins off the ground, making them super useful for countering Bulldozers, Tasers, or Cloakers throughout the heist. That being said, the Throwing Knives are a fine option as well, dealing 66% less damage but giving you six of them. You’ll still be able to one-shot any unit in the game except Bulldozers. 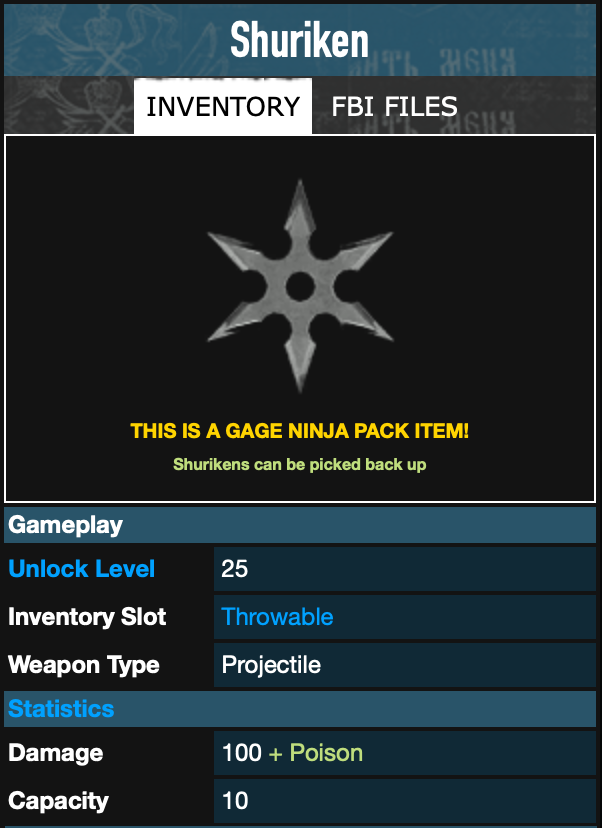 #5 The Shurikens are the only throwable that deal damage-over-time to a single target, making them good for Grinder builds who also want to stunlock specials. You also get ten of them and they’re retrievable from the ground, making it very unlikely you’ll run out by the end of a heist. They’re also effective in stealth, since the poison animation will delay the guard’s death and give you extra time to answer his pager. 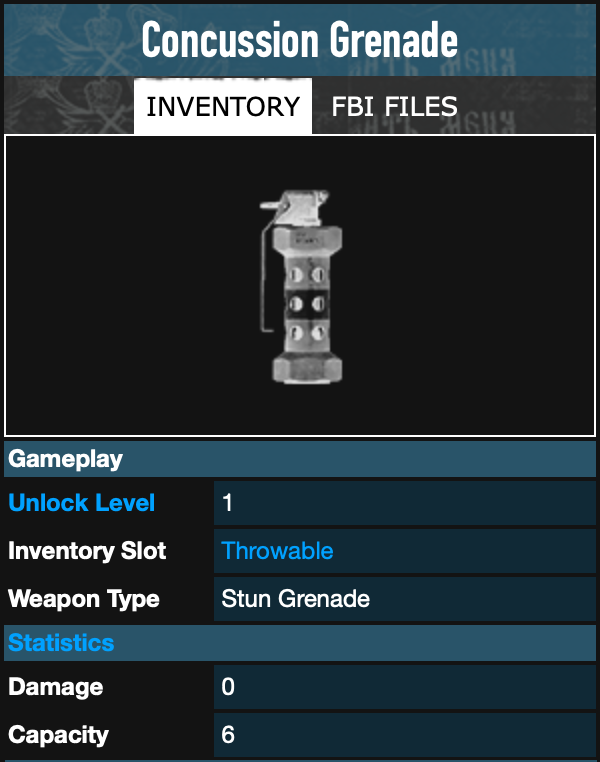 Bonus #6, The Concussion grenades are, ironically, not as flashy as these other options, but they’re actually really good for objective rushers or any running heist. The blast radius is huge, often hitting a whole room, and it stuns enemies for 4 seconds and gives them a 50% accuracy debuff for the 5 seconds after that, more than enough time to rez a teammate, clear a room, or complete an objective. The lack of damage can also be an upside on heists with lots of civilians scattered aroud the area.

It’s pretty great how many options we have these days in the throwable slot. While the initial frag grenades were iffy in their effectiveness at best, future DLC have added a whole host of abilities that fill important roles in any build. Best of luck heisting with whatever throwable you choose to bring. as always, this is aabicus with the SPUF of Legend, keep those helmets flying!