Three years ago I indulged in a full article about my Medic cosmetic loadout, since it had remained remarkably consistent throughout the years and each piece held a lot of sentimental value to me. But only recently did I realize that there’s a fair amount of personal history in my Demoman loadout as well, considering I’ve been offclassing him for almost as long.

Much like with Medic, my first few years were spent playing completely cosmetic-free; I was so addicted to stats I couldn’t fathom caring about something that didn’t change the actual gameplay in any way. It also took longer for me to realize that Demoman was my favorite offclass; it wasn’t until I dropped my first Sticky Jumper that I discovered the pure unbridled joy of flying through the air and obliterating squishies before they could even unscope.

On May 26 2013, about a year after getting my Medic’s Flies Pickelhaube, I finished stockpiling earbuds and decided to buy my second unusual for Demoman. I knew it was going to be Scotch Bonnet (the only hat at the time that looked like something an explosives expert would wear), and I finally decided on Bubbling since I wanted something that made sense in-universe. Much like a battlefield doctor would logically be followed by a posse of flies, a drunken grenadier would give off bubbles due to the laws of cartoony artstyles.

Giddeon the bird joined my loadout on January 18 2014, shortly after the strangifier came out. (I didn’t actually choose the name, his previous owner did!) I wanted a strange cosmetic to track points, and he seemed fitting since Archimedes was filling a similar role on my Medic. Giddeon was actually my first strange to ever reach Hale’s Own.

The third loadout slot is the only one that occsaionally swaps between two different cosmetics. The older is a set of white Professor’s Pineapple I purchased on April 5th 2013; I’ve always liked how the white matches with Demoman’s sleeves and Giddeon’s face, plus it was also equippable by Soldier and Pyro. I’m not sure why I renamed it to “Mad Milk grenades”, other than that I couldn’t stop seeing the uncanny resemblance. But sometimes I wear the Cool Breeze since I have craft #81, plus kilts are awesome.

(The strange haunted Kritz-or-Treat was purchased exclusively to take a screenshot for this article. Should have just photoshopped the useless thing.)

Unlike my Medic, who exclusively uses boring strange weapons, Demoman’s also been blessed with some exciting weapon qualities as well. In December 2013 Valve started releasing chemistry sets, and a self-crafted Collector’s Sticky Jumper became the first rare-quality item I owned for Demoman. And on June 4 2015, Valve screwed something up and a bunch of Strange-Normal items entered the Steam Community Market, and I got my paws on one for a criminally-cheap $2.44. It was great timing too; I’d just hit Hale’s Own on my old strange Grenade Launcher by killing Saxton Hale himself, and wanted a fresh one so I could progress through the ranks again. The #1 goal on my personal bucket list was always to own a glitched Normal weapon, so I consider myself insanely lucky it’s also a strange version of my favorite weapon in the game.

And the final weapon is also the most-recent addition, as I wanted to get something nice after selling my Genuine Robo-Sandvich last week. Enter Fröstbøne, my new unusual Icy Scotsman’s Skullcutter! 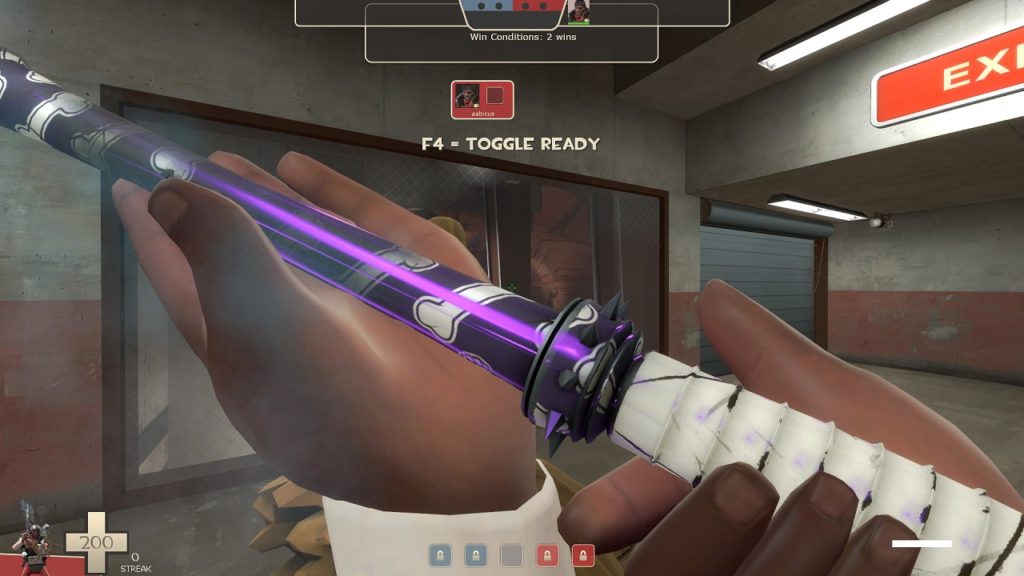 The Skullcutter has remained a beast ever since Valve buffed it in mid-2015. I spent a long time trying to decide if I preferred it over the Bottle; it seemed too good to be true with a damage bonus, random crits, and extended reach, but I was really bothered by its painfully slow draw time. Since then, however, Valve added Casual mode and completely neutered community servers, so these days the people I play against aren’t the sort that a half-second delay will matter.

I know I’m being indulgent spending so long talking about my own cosmetics, but I’m sure I’m not the only SPUFer who has fond memories of every individual piece in their favorite loadouts. We’ve all been playing this game for years, some of us for over a decade. If you haven’t recently, go check your own favorite class and see which cosmetics draw your eye first. Maybe go check your trading history and see when you first obtained it, how much you paid for it. If you’re really willing, I’d love to hear some stories in the comments. Times are tough these days, we need whatever nostalgia we can get.