Every September 16th, The Daily SPUF honors Jump Day, a memorial holiday celebrating the pre-nerf Sticky Jumper which was cruelly taken from us in 2013. Last year’s Jump Day was a poignant milestone as it was our sixth, meaning we’d had one for every sticky that Valve deleted from the clip. This time next year, we’ll hit a nice round eight and the entire clip will be accounted for.

Older articles have discussed why the nerf was unwarranted, unneeded and ineffective at solving the actual balance problems that TF2 suffered from back in the day. This one instead wants to focus on the positive, and discuss the impact the Sticky Jumper had on TF2.

Sticky Jumper really rewrote the game for Demoman. Every other secondary was a shield or an explosive, but then the Sticky Jumper turned that on its head by offering the Demoman unparalleled mobility to torpedo himself across the map while suffering only fall damage. Plus, unlike Soldier, Demoman could bring along a Grenade Launcher and deadly Demoknight melee, allowing him to retain a powerful presence on the battlefield. I’ve covered them all in earlier articles, so today I’d like to discuss the many wonderful playstyles the Sticky Jumper brought to our favorite non-Soldier explosive class: 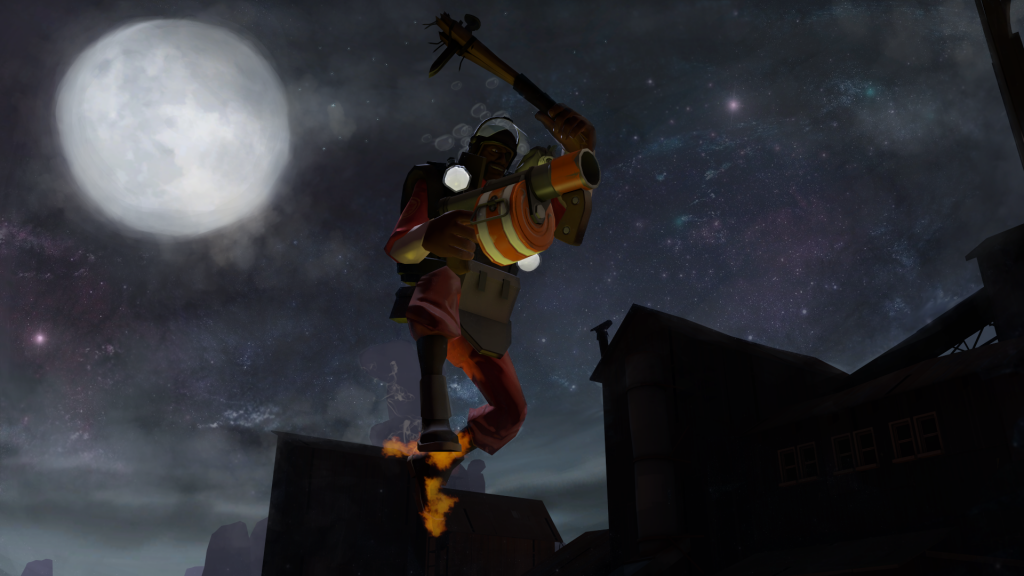 1. Backcapper: Scouts and Spies are the time-honored backcappers of the TF2 meta, but a Pain Train/Sticky Jumper Demoman can give them a real run for their money. Especially if said control point has any verticality, like the spires on Badlands.

2. Point-Rusher: Scouts are also likely to be the first class to reach any upcoming points, but they’re going to suffer if the enemy team has any Engineers with sentry nests waiting for them. Again, Sticky Jumper Demomen have the advantage since they’re wielding Grenade Launchers (and their verticality helps them choose what positioning would give them the best angle to fight the sentry.)

3. Backline Terror: Sticky Jumper Demomen aren’t restricted to rushing objectives; they’re also perfectly capable of riding the skybox to effortlessly reach behind enemy lines and mulch any unsuspecting snipers/teleporter entrances. On claustrophobic maps like Doomsday and Helltower this can be a full time job (and thoroughly entertaining in its own right) but even on normal maps (or even hyper-large maps like Orange and Balloon-Race) I often swap to Sticky Jumper Demoman if a particular sniper needs to be routed from his current hidey-hole.

4. Health Regenerator: The last (and my personal favorite) playstyle is sadly no longer with us due to Valve removing the Persian Persuader from the game, but at the time those two weapons formed the only viable health-regeneration playstyle for non-Demoknights. Because the Persuader’s health regain was dependent on reserve ammo and the Sticky Jumper had +200% bombs, you gained a huge chunk of your health back from any ammo crates, including the ones dropped by murdered enemies. And when you ran out of pipes you could temporarily grab any Demoman/all-class melee off the ground to replenish your reserves. I was very unhappy when Valve removed this playstyle from the game, and still haven’t really forgiven them for it.

There were a few other bizarre Sticky Jumper playstyles that Valve patched out over the years, each one a sordid chapter in this mobility tool’s checkered past. I guess we should count ourselves lucky that the weapon’s core functionality is still intact, and we can all fling ourselves through the air with reckless abandon without even getting vote-kicked like the poor useless Trolldiers. As I do every year, I encourage any fans to go re-experience the Sticky Jumper in memory of the golden days. Caber a sniper, help a Quick-Fix Medic capture the flag, maybe even kill somebody with the Sticky Jumper itself just to really stick it to Valve. Stickies 3 through 8 may be gone, but they’ll forever live on in our hearts.