I’ve gotten a few requests over the years to make a sequel to my “5 Heists that Give Easy XP” video, except regarding cash. But for the most part, I haven’t felt the need to actually do so, since the game pretty much drowns you in dollars no matter what you do, and you should be sitting comfortably after completing a few heists of any length or difficulty, so my main advice is to just play what you want and don’t worry about it. But I guess if you have an academic curiosity, or a minmaxing fetish, here are 5 Heists that Give Lots of Easy Cash

(Also a note before we start for brand-new players who might be wondering, there’s no difference between farming spending cash and offshore cash. They come from the same end-of-heist pool, so more of one means more of both.) With that out of the way:

Stealth missions are always going to give you the best bang for your buck since they don’t get much harder even on higher difficulties, and it won’t take long to memorize all the loot spawns and escape with almost 8 million dollars on Overkill, or up to double that on Death Wish. But if you’re not afraid to go loud, another good choice is #2: 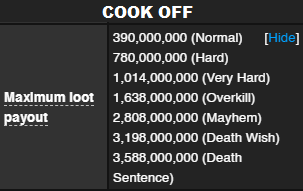 This is probably the best possible heist on a time-to-money ratio. Since you just sit there cooking meth in one place literally endlessly, you can earn as many millions as you want before pulling the plug. The only downsides are tedium and the fact that there’s just no way for the heist to go fast. If you want a bit more excitement in your grind, or maybe you’d like to try cooking meth in stealth, I recommend #3: 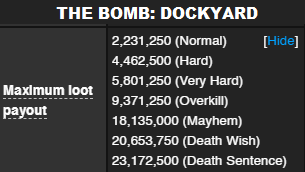 This may seem like a weird choice for this list, but it’s really not that hard to stealth once you get the hang of the spawn points, plus you also get a nice stealth bonus, 15%, for completing it. Overall, you can earn almost 10 million dollars on Overkill if you grab enough of the random loot, and there’s a lot more of it than on Shadow Raid. I wouldn’t recommend completing it loud as the objectives get seriously tedious with hordes of cops in the way, but that is technically an option. Though at point, you really should have just gone with: 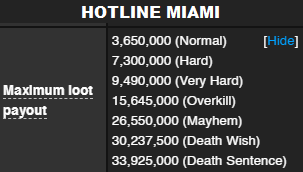 Hotline Miami gives you a generous 1.8 million just for completing it on Overkill, but there’s over 15 million dollars worth of goodies lying around to sweeten that pot. By cleaning out the basement and/or cooking some meth on Day 1 plus grabbing all the loot on Day 2, which is probably some of the easiest loot to secure in the game, you can score a ton of money during the many, many times you’re waiting for Bain to give you a new objective. But if that sounds like too much work, there’s another heist that will give you almost as much for no extra efffort whatsoever. I’m talking about: 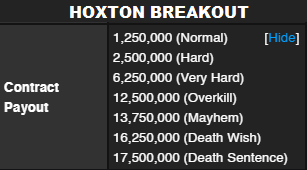 Here’s the one I personally use when I need money because it just cannot get any easier. There are NO additional objectives; just survive the map for an easy $12.5 million dollars, no questions asked. Aftershock is an honorable mention, as a one-day heist with no side objectives, but it gives only a third as much payout and you have to carry a lot more than just one stupidly-heavy loot bag.

Bonus #6 is Crimespree, and this isn’t the first time I’ve capped a list off with CrimeSpree, but it’s just so bloody easy to join someone’s high-level CrimeSpree and simply survive the heist to get buried in every concievable kind of reward. Who knows, you may even get one of the heists on this list and you can double-up! But again, I know I already said it, but I truly think the game is more fun if you don’t do this and just play whatever you want. There are so many heists and you’re going to be drowning in money in a couple days no matter what, so just enjoy the heisting! Have a great day and keep those helmets flying!