Yesterday we witnessed a drugged-out fish stumble drunkenly through the Elite Four like a bull in a china shop. Most champions would hang up the gloves and retire to a life of meditation and peaceful tranquility…but our hero is no ordinary karp. 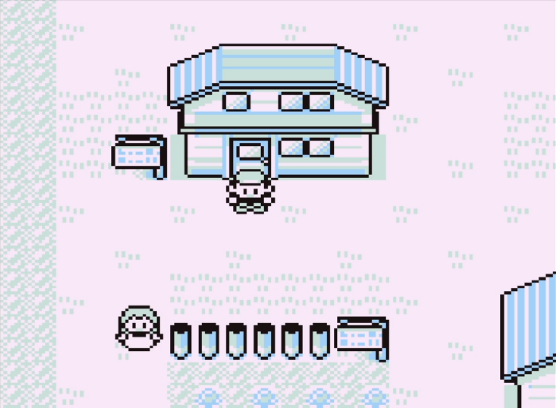 After being crowned the reigning titleholders of Kanto, Magikarp and I experience a credits-themed fever dream and regain consciousness outside mom’s house in Pallet Town. Our first objective is clear; there was a trainer in Victory Road whose Grass team was so chonky that I couldn’t defeat her even at level 100. Now that I’d beaten the game and was free to use X Attacks willy-nilly, it was time to see how she enjoyed a Magikarp binged out on steroids. 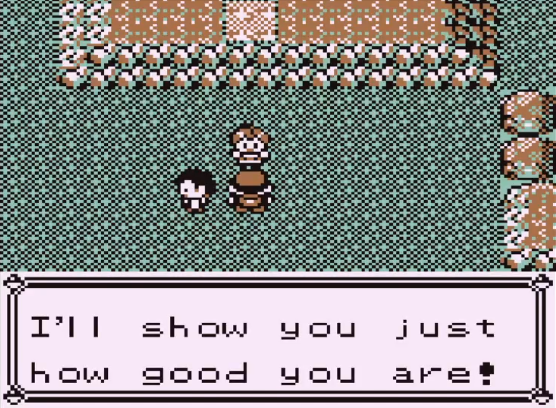 Yet despite me being able to use healing items and stat-boosting drugs, Cooltrainer Caroline (as she’d be named in the later-gen remakes) still gave me a serious run for my money. With a Bellsprout, Weepingbell, Victreebel, and two hyper potions, she basically played like a poor man’s Erika, paralyzing and healing and critting up a storm with Razor Leaf. I won, but not without more difficulty than any other fight against a random nameless trainer. 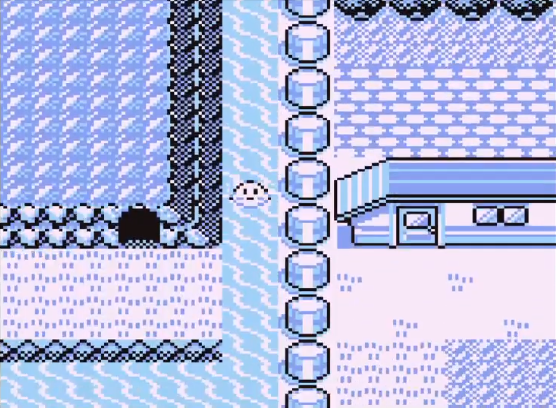 Once Caroline’s grass Pokemon were in the rearview mirror, it was time to spelunk the suspiciously unguarded cavern outside Cerulean City, where only the champion is allowed to go. Since Blue probably didn’t have time to investigate during his short reign, it’s now fallen to us to vanquish its depths. (And use our first repels of the entire stream!) 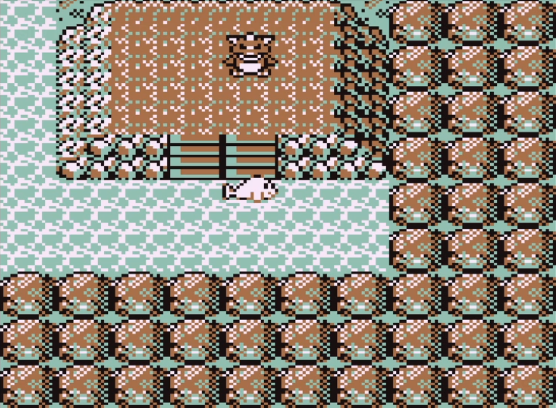 Despite its reputation, Cerulean Cave is actually one of the easier caves in the game, lacking any puzzles or delaying tactics beyond a shamelessly maze-like interior. In the end, waiting for us on the third floor of that maze was the most dangerous Pokemon of all. 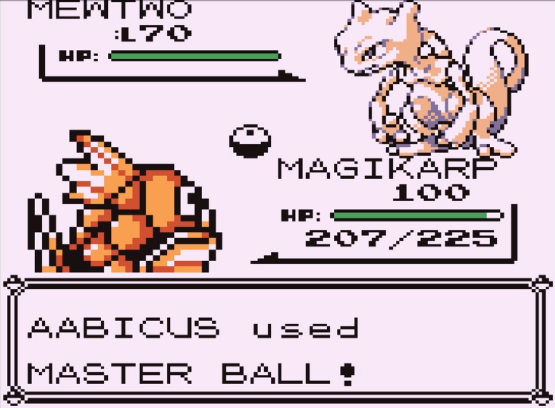 Despite having a sky-high Special stat and some of the best moves in the game, Mewtwo was no match for Silph Co technology. It’s pretty much mandatory to use the Master Ball against Mewtwo since he knows Recover and will refuse to stay at red HP for ideal catchability. But that means we’ll have to catch the three legendary birds the old-fashioned way, by spamming Ultra Balls. 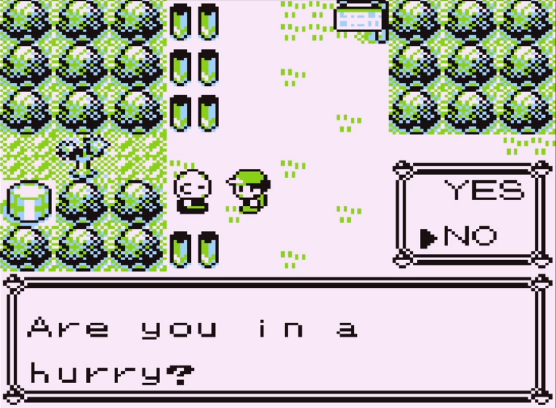 Since I drained the bank buying items for the Elite Four, we don’t have nearly enough money to afford the Ultra Balls it would take to pull that off. But as the run is officially over, I feel comfortable triggering (and, for completionist’s sake, catching) the most famous glitch Pokemon in history. 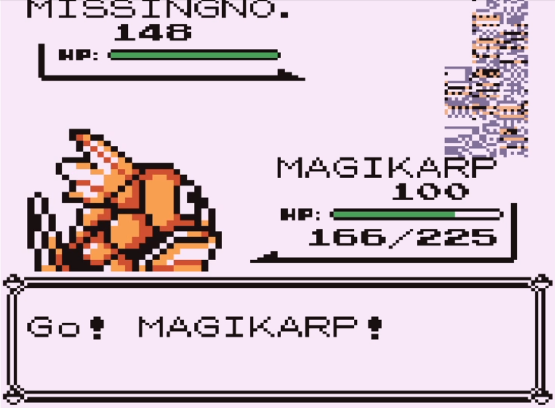 I got lucky MISSINGNO would even spawn in this save file; you need to have certain letters at certain spots in your trainer name, and the ‘s’ in Aabicus just happens to be one of the qualifying candidates. MISSINGNO’s defense is literally zero so it dies in one hit from any attack, but Magikarp’s Dragon Rage comes into play one final time; as Dragon Rage deals fixed damage, it’s practically the only move I could have used to whittle MISSINGNO down for easy catching. 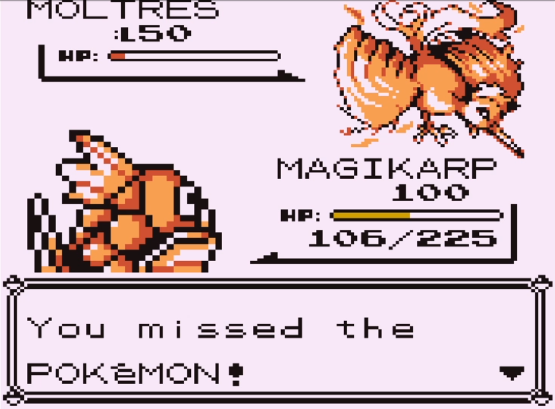 After being caught, MISSINGNO sportingly duplicated the Ultra Ball in my 6th item slot by 126, giving us the resources we needed to go try for Moltres. I figured that’d be the best starting bird since Magikarp resists fire, but I got very concerned when every ball met with “You missed the Pokemon!” Was there some hidden check that I was failing, something preventing me from even having a shot at catching the birds? 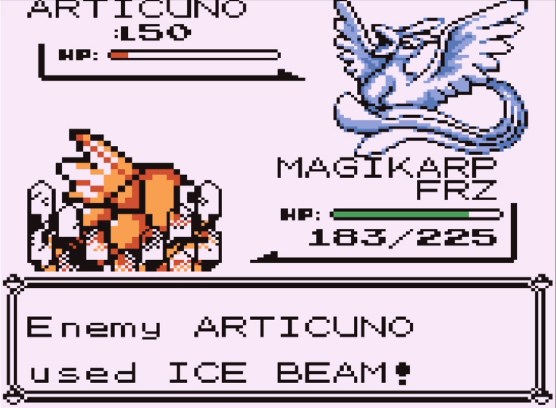 Luckily it turned out no, that was just Gen 1’s way of saying “you missed by an incredible amount.” Since Magikarp can’t paralyze or freeze them, our odds were a shockingly-low 2.6% per thrown ball. The random number generator never even got close enough for a wiggle until it hit the exact number and caught Moltres on our 40th ball. Articuno was equally slow but not much harder, as Magikarp also resisted Ice-type. 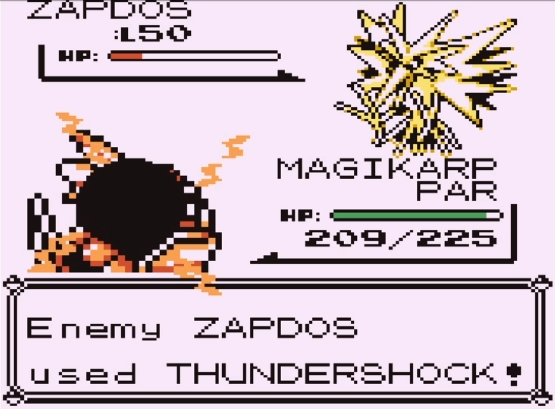 But I was legitimately worried about Zapdos, the hardest-hitting Electric pokemon in the game. I made sure to stack myself up on X Specials, and luckily that was enough to keep his Thundershocks at bay until an Ultra Ball beat the odds. After marching out of the Power Plant with my shiny new legendary trio, is that it? Is the game over? What else could we possibly have to do? 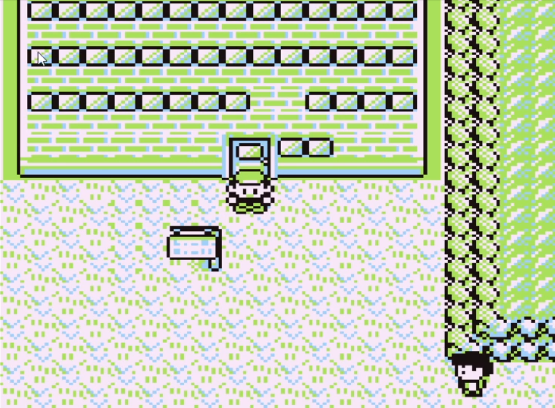 Of course it’s not over! Now that we’ve turned this into a glitched run, Magikarp has one final challenger to defeat. Professor Oak is buried deep in the code as a dummied-out fightable trainer, with tougher Pokemon than even the Elite Four. I couldn’t call it quits before testing Magikarp’s mettle against the best of the best. 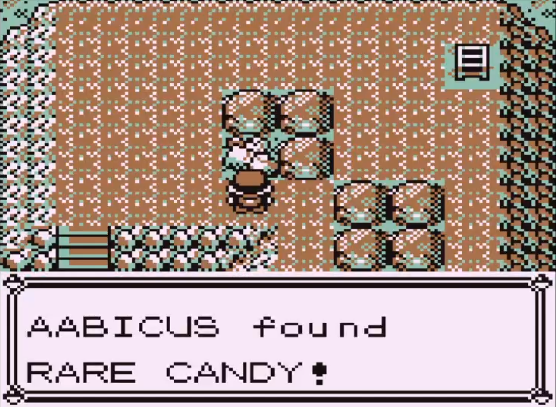 In order to trigger an Oak fight, we first need a Pokemon with a Special stat of 226. Once again we got incredibly lucky because my Mewtwo rolled a 220, meaning two Rare Candies would hit that perfectly. (Nobody else is even close, 226 is a crazy Special for any legitimate Pokemon to hit). Now I’d already used all my rare candies on Magikarp, but fortunately there’s one more to be found in Cerulean Cave. 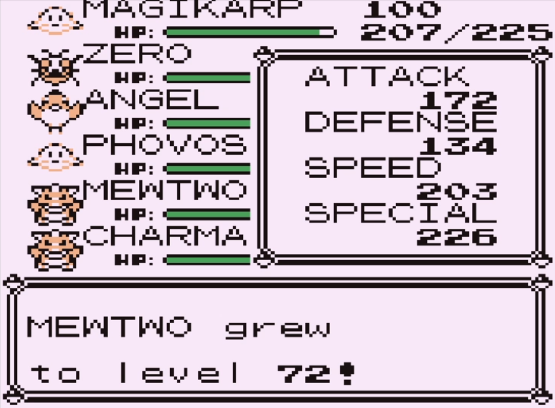 With the Rare Candy in our 6th item slot, we duplicated it via encountering another MISSINGNO so we can level Mewtwo up twice. (I also grabbed my neglected Charmander from the PC, for reasons I’ll explain later.) We then taught Mewtwo Flash, overriding Swift (again, for reasons I’ll explain later). Now we need to set the stage for the glitch to occur. 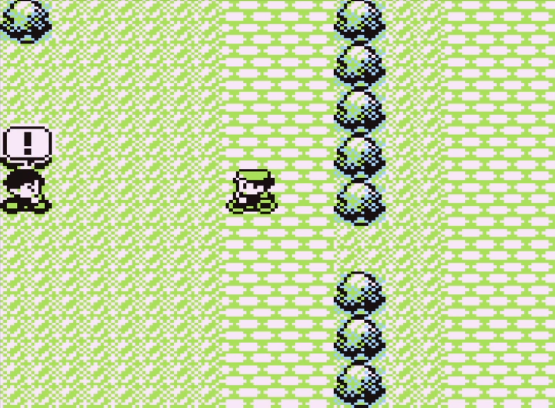 The way you fight Oak is by manipulating a pre-existing trainer so the game loads the wrong opponent. The first step is to choose which trainer (luckily I’d skipped a fair amount of them during normal gameplay). I picked this Biker on Route 14, since you need to use somebody who walks up to you after spotting you. The moment he sees me, I open the menu and fly away to Fuchsia City. 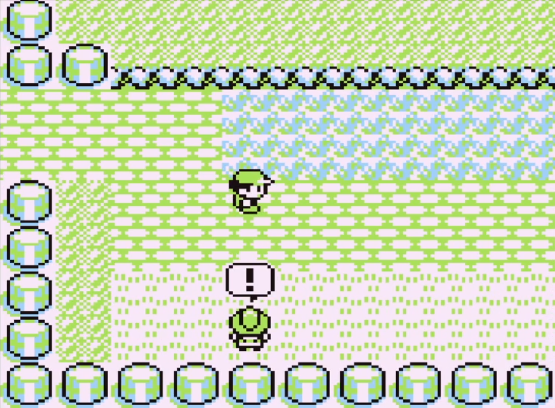 At this point, the game thinks I’m in combat when I’m not. To escape this pseudo-state, I walk over to Route 15 and fight a different trainer (you gotta use one who also walks up, otherwise your game will freeze). I’m now free to fight Pokemon in the tall grass, and I chose this route because it’s one of the few places that spawn Ditto. 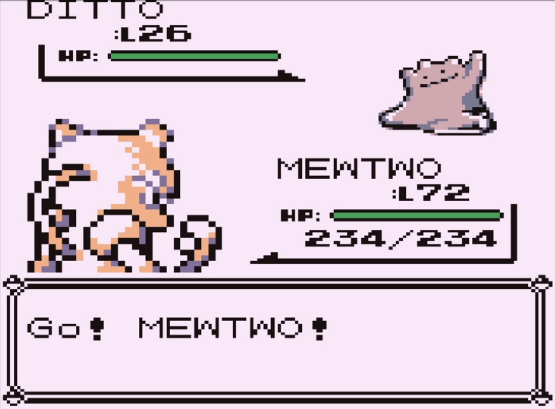 Let me explain what we’re doing here. The game’s code uses a certain bit when determining what trainer you’re about to fight. If that bit reads 226, you fight Professor Oak. Because Pokemon Red loves reusing memory, that same bit also holds the Special stat for any wild Pokemon you’re currently fighting. This means that, to get Oak, we need to fight a wild Pokemon with a Special of 226. And Ditto gains that when he Transforms into my Mewtwo and steals its stats. 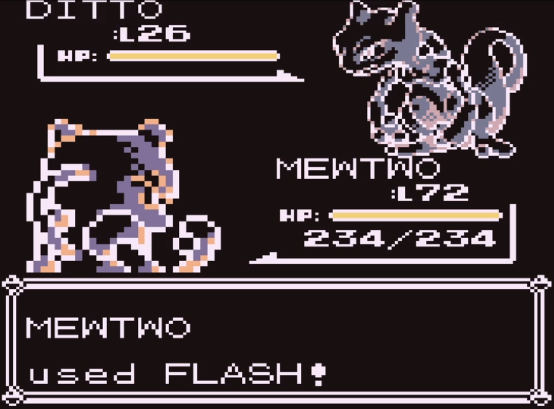 So far so good, but there’s another thing to consider; much like your rival has 3 possible teams (one with each starter), Professor Oak has 7 possible teams (one with each starter, and four garbage-data teams that crash the game). The bit that determines which team Oak uses is also repurposed for wild Pokemon battles, specifically it holds the number of times the wild Pokemon’s attack has been lowered. We want Oak to use the team with Venusaur (since I chose Charmander and Blue chose Squirtle), so we need to lower his attack five times. Here’s how we made that happen: 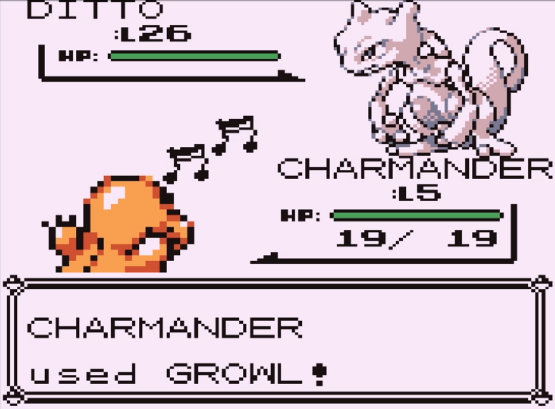 First, my Mewtwo spammed Flash to drop DittoMewtwo’s accuracy into the doldrums. Then I switch to Charmander, who can now safely use Growl five times, the exact amount needed to ensure Oak uses his Venusaur team (this is why we replaced Swift with Flash; Swift bypasses accuracy checks, so DittoMewtwo would still have been able to one-shot my pitiful lvl5 Charmander). 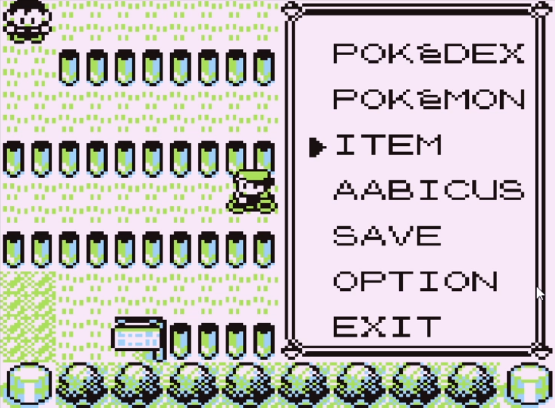 After fleeing from the Ditto, we just need to fly back to Route 15 and ensure we don’t fight any trainers or wild Pokemon before reaching that Biker. The final sign I’d done everything right was when my menu opened of its own accord as soon as I took my first step onto the Biker’s route. 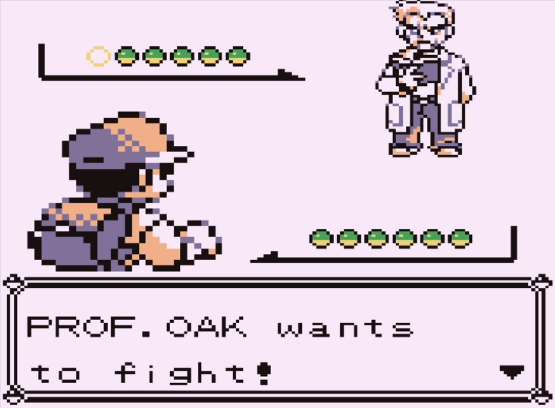 Professor Oak did not pull any punches, and was more than worthy of being the final boss in this run. Every single one of his Pokemon put up a serious fight, most of which were halving my hitpoints every attack in spite of me preloading X Defenses and X Specials for the occasion. His penultimate Pokemon, a lvl69 Venusaur, regularly blasted me down to red health with a single hit; I only defeated him because he missed a Sleep Powder and then charged up a Solar Beam, letting me finish him off before he fired what would absolutely have been a one-shot kill. 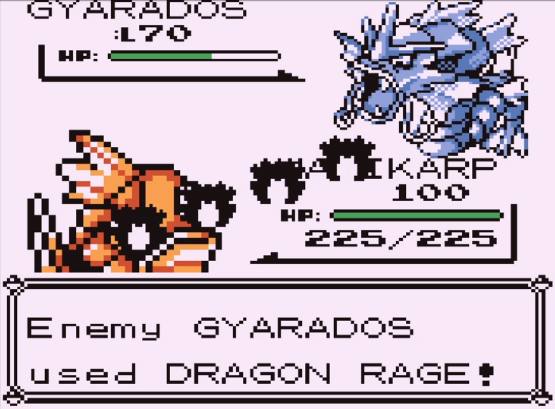 And last but not least, his final Pokemon was a Gyarados who spammed Dragon Rage. Fitting. 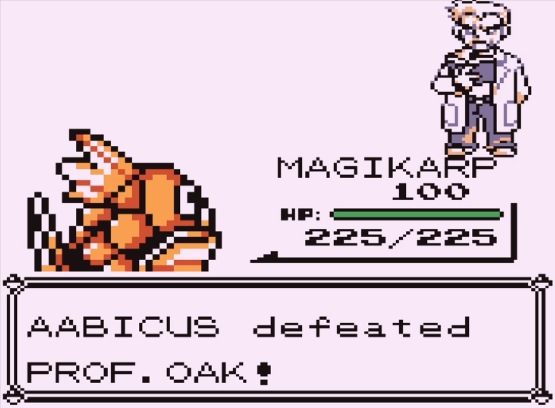 With a final “I was too impatient!” (for some reason he uses the defeat line normally said by the girl trainer from Route 15), Professor Oak slinked off, thoroughly defeated and marking the true end of Magikarp’s odyssey. My last action was to deposit Mewtwo and Charmander back into the box, so Magikarp could end the save with the OG squad he’d weathered the whole game with. 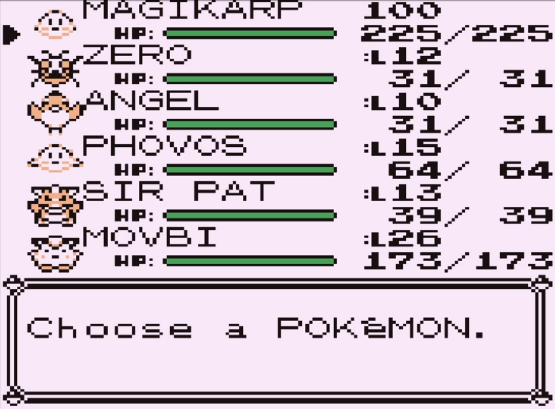 I had a blast doing this challenge, and I’m surprised nobody before me had beaten Pokemon Red using only a Magikarp. Unlike most challenges of this nature, the game never got frustratingly grindy because Dragon Rage is such a unique move that lets you completely bypass most of the ways enemies would normally stonewall a Magikarp. If you want to give it a try (and I honestly recommend you do), I’ve uploaded the starting save file to Google Drive so you can try your own University Magikarp run, just have to procure a Pokemon Red emulator by your own means. In any way, hope you enjoyed this series and thanks for joining Magikarp on his adventure!