I recently wrote an article about a cut weapon from Doom. Today I want to dedicate a similar eulogy for a similarly-redacted element from Doom‘s sequel series, Quake. But first, we need to talk about Ogres. 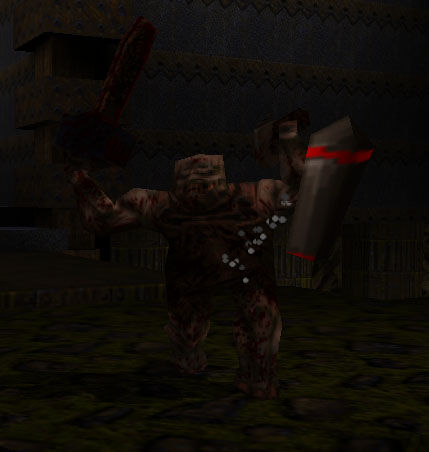 What is an Ogre?

Ogres are the most frequently-appearing of the many enemies in Quake. Wielding chainsaws and a grenade launcher, they don’t seem to have much in common with the sort of medieval tropes you’d expect to see. But nevertheless they set the benchmark for enemy damage. The 5 enemies that deal more then the ogre are considered “upper-tier” and a high-priority. While the 7 that deal less are mostly cannon-fodder. And then there’s the final monster, who doesn’t even fit into this sort of comparison: the Ogre Marksman.

Now, you may think the videographer messed up and just showcased the Ogre again, but that’s the problem. The Ogre Marksman looks exactly the same as the Ogre. Same model, same animations, even the same chainsaw/grenade launcher weapons. There’s only one programmed difference between these two monster types. The Ogre Marksman makes no sound upon being alerted to the player’s presence. While this technically makes them a more “stealthy” monster type, all the noise it’s going to make upon charging towards you and firing its weapons make it a largely moot point.

The last thing of statistical importance is that you can get Ogres and Ogre Marksmen to in-fight because they’re coded as different enemies. But it’s pretty difficult to get this to happen in practice. You can’t tell them apart, plus arcing grenades are not as easy as hitscan to manipulate. But this is all theorycrafting anyway, as Ogre Marksmen don’t actually spawn anywhere in the game. They’re the only fully-finished monster that simply isn’t placed anywhere in any level. Meaning you can only see them by spawning them with the console. Commercial addons for Quake weren’t quite as stingy and you’d also occasionally find them running around. They’re a pretty common sight in Dark Hour for example. But they’re not used tactically, oftentimes it looks more like the devs meant to use Ogres or simply didn’t realize there was a different between the two monster types.

The last difference between Ogres and Ogre Marksmen are the death notification. While Ogres (and every other monster) say something like “<Player> was killed by <Monster>,” Ogre Marksmen kill notifications read only “<Player>.” This, more than anything, indicate the Ogre Marksman is an unfinished enemy left in the code never intended to see the light of day. Because, really, nothing in the final incarnation even resembles a ‘marksman.’ Grenades and chainsaws are probably the least-snipery weapons in existence.

Personally, I think they were planning for a long-range sniper monster, and didn’t see a need to model/texture a whole new enemy the player will barely be able to see. They also removed the ‘alerted’ sound in preparation for its silent ambushing nature, but then the whole idea got scrapped late in development. Oh well. In any way, you have my condolences, Ogre Marksman.