On July 13th, Tarun Chahal subscribed to the channel and we officially passed 1,000 subscribers on The SPUF Of Legend! Medic and I are both completely blown away that you’ve all decided to join us on this little channel, and I don’t think either of us ever suspected from the beginning that we were going to hit the quadruple digits on subscribers. We just want to give you a big thank you not just for subscribing, though, because actually you guys add a lot of value to the channel, and really, it’s not just the two of us. In a bunch of different ways, mostly in what you guys end up commenting. I can think of a number of videos that have been improved permanently— like, all videos going forward are better because of something one of you posted in the comment section. So this video is not just a thank you for subscribing, these are 5 Thank You’s for specific types of comments that you all leave that improve the channel’s quality not just for me and for you, but for everybody watching it. 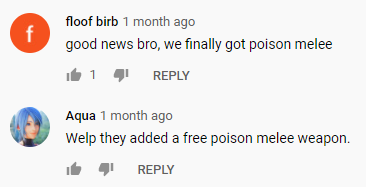 #1: I want to thank anyone who’s posted additional information in the comment section on the topic of whatever the video is about. We consider ourselves an educational YouTube channel who tries to, you know, educate the viewer about something they may not have known about, and we can’t always go into a lot of detail because our videos are so short. Anybody who posts more information in the comment section on the topic adds more value to the video for everyone who watches it. Especially if a video goes out of date or something like that; I’m not always looking back at my old videos and, you know, new weapons and stuff are coming out for whatever game we covered, and there’s gonna be stuff that we couldn’t possibly have covered because we can’t see into the future. Thank you anyone who posts something like that in the comment sections.

#2: Thank you anyone who’s sent in corrections. I know that I, in particular, have— I do my best to research the topic as well as I can and not make glaring errors, but sometimes I make mistakes and I appreciate anybody who posts in the comment section to let me know (and everyone who’s watching) that, you know, there’s something wrong about— the Matryoshka Grenade is not actually the best explosive grenade in Payday 2. Things like that, thank you for letting me know about that so I can usually update the description since YouTube removed annotations, I can’t actually update the video itself anymore.

#3: Thank you anyone who’s sent in recommendations for improving video quality. I still consider myself an amateur video editor, I’ve only been professional for about seven months now. And anytime you see something that I could be doing better at, please let me know and I really appreciate it. Just recently I’ve been starting to use color-grading and I’ve really been impressed with how much it improves the quality of the footage, and with things like audio, I’ve been toying around with the multiband compressor and the dynamics processor, both plugins for Adobe Premiere I was not aware about until a viewer messaged me and let me know about them. Thank you anyone who sends in suggestions like that— Ooh I forgot to mention a big one: transitions. I’ve been trying to make the transitions more interesting, I know that I tend to default to the Page Wipe, which, I dunno, it just feels appropriate because we’re kind of an educational channel, so it’s like turning a page, it’s like you’re reading an informative book. But I’m trying to get a little more creative with things like that, thank you anyone who lets me know ways I can improve the videos. 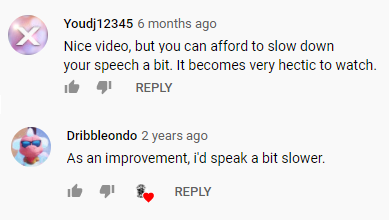 But a related apology for #4, for the most common request people submit: I’m sorry anyone who asks me to speak slower. I genuinely wish I could, but this is kinda just how fast I talk. I dunno, this is kinda just how my brain works. To compensate for that, I usually try to add really good subtitles (closed captioning) so if you ever need closed captioning, I put a lot of work into those to make sure that even people who have trouble understanding what I say with my rapid-fire Californian accent can still enjoy the video. A related— also, people sometimes ask if I can make the video longer, I wish I could but I never actually gun for a specific length. I just kind of make the video, and it turns out to be whatever length it turns out to be, and it turns out that’s usually between 2 and 3 minutes. So as much as I wish I could beef it up to between 5 and 6 minutes, I just kinda like to err on the side of covering the topic and moving on. Which is why it’s thank you for everyone who does #1, 2 and 3 to make the videos better for what little time they each are.

Finally, #5, this is the big one, thank you everyone who’s said they love the content, it’s really great to see posts where people are talking about enjoying the videos, and anyone who says something to the tune of, you know, thank you for the style that we cover, these really fast no-nonsense videos that just get to the point, they aren’t begging for likes, and begging for subscribers, and plugging patreons, that was our goal when we first created the channel and it’s really great to hear anyone who says that they like those sorts of videos, and we hopefully can continue bringing videos of that ilk for the forseeable future.