Despite not considering myself an MMO kind of guy, I’ve somehow put in hundreds of hours in both World of Warcraft and Final Fantasy 14, mostly because they’re great games to play while plowing through my TV backlog on the second monitor. Both of them were highly influential games for their generation of MMOs, cornering the market by setting the standards many of their competitors would try and (for the most part, fail to) surpass.

But they’re only two parts of the triumvirate. There’s a third game, one that first put 3D MMOs on the map. Most of the earlier titles were isometric pixel games like Tibia and Ultima Online, but EverQuest blew everyone’s expectations out of the water when it took the industry by storm in 1999 and quickly eclipsed the MMO genre. The development team for WoW was heavily composed of EverQuest veterans convinced they could do a better job, and I wanted to see for myself what they’d improved and what had already been there. I’m not sure why, I guess it felt like I wasn’t getting the whole story otherwise. Part of the joy of playing Final Fantasy 14 had been seeing all these familiar WoW tropes and appreciating how the devs had improved on the pre-existing formula, and EverQuest was a chance to possibly see that evolution from the other direction. Now, I totally understand that EverQuest‘s glory days are behind it, and the time had long passed for me to get a legitimate taste of how the experience should go, so I made a promise before I even installed; this will be a positive review. EverQuest did what it needed to do for the period it came out, and we can still appreciate dated games even if they’ve become borderline-unplayable with time. 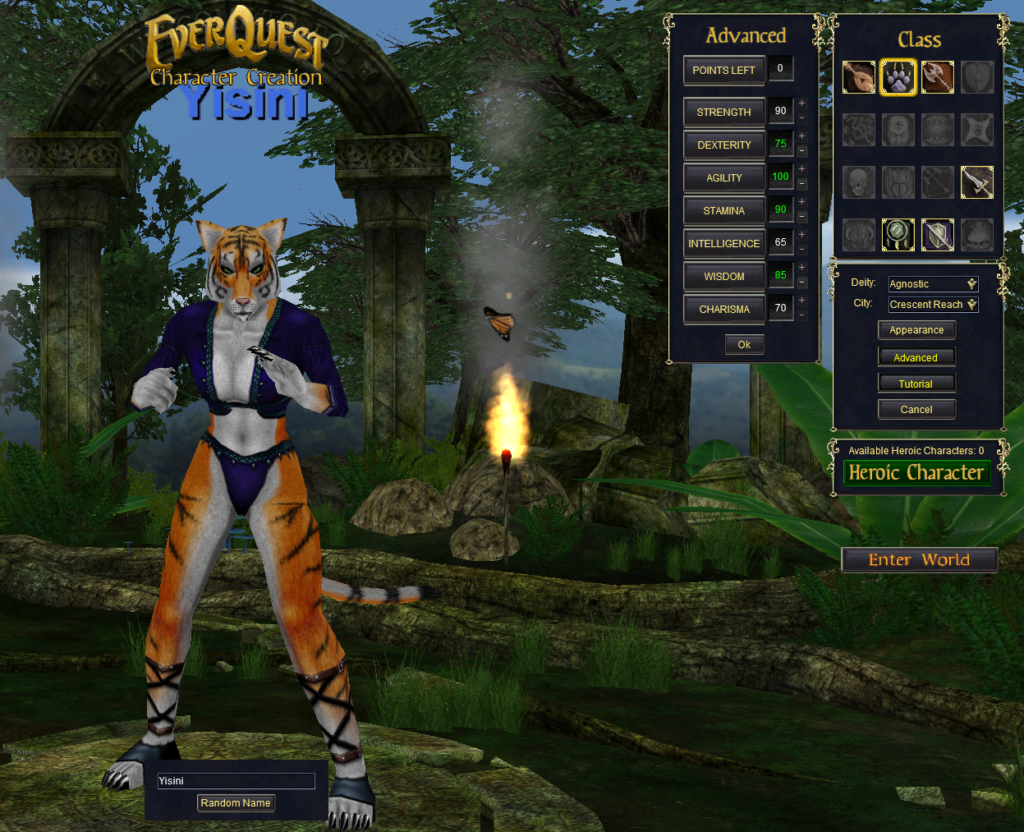 EverQuest‘s character selection options reminded me heavily of WoW’s, with a wonderful spread of very different races available to choose from. I’ve always been bugged by MMORPGs that skimp on racial variety, like FF14 and Black Desert Online, but EverQuest blew those worries out of the way quickly with everything from lizard people to frog people to wrinkled, wart-covered trolls. Ultimately I decided to try a feline Vah Shir, mostly because they felt thematically appropriate with the Worgen and Miqo’te characters I played in my last two MMOs. Plus they had access to the Beastmaster class, a pet-oriented spellcaster the wiki described as a “hybrid monk/druid”, and I have literally never heard a combination that more appropriately described what I like to play. 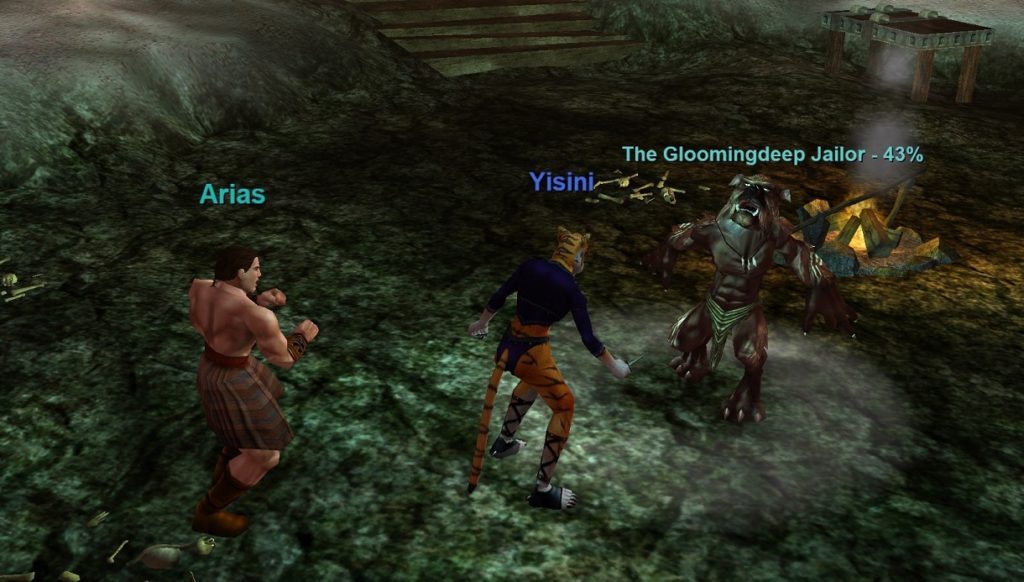 The tutorial starts you off in jail, where you break out with the help of a sympathetic NPC bruiser. The first thing I noticed upon taking control of my character was how intuitive the camera was; just like in WoW, you could hold down right-click to look around while focusing on WASD or arrow keys to walk, and you could bind Autorun to middle mouse (my preferred location) while casting spells/abilities with the number keys. As someone expecting to have to wrestle with basic movement, the modern-quality control system was definitely appreciated. On the other hand, it was hard to miss the lack of polish on UI elements; everything used really generic Windows fonts and efficient-but-basic textboxes. My personal favorite bit was the mini-map, which I’m convinced was hand-drawn in MS Paint. The game was also perfectly happy to slather your screen in GUIs, which made it hard to tell what anything did, but I can’t rightly fault it for a problem that even modern MMOs unanimously suffer from.

The spell system was super interesting; you didn’t just get spells on level-up, you needed to go purchase them from a class trainer and manually add them to your spell book. The game was perfectly happy to let me purchase spells I couldn’t actually cast yet, along with anything else, and I quickly discovered that space was on a serious premium. Even with a banker, it was really, really easy to run out of space with what little storage capacity my character possessed, and additional backpacks take up slots in the 10 miscellaneous slots you get. Even basic monster-hunting will quickly clutter your inventory with vendor trash that constantly hogs valuable space for weapons, loot, utility items, and food. And you better not skip food. Unlike WoW and FF14, where eating is an optional method of increasing XP gain, EverQuest will harshly punish your character for going hungry.

I really liked how customizable your character’s skills were; not only did you assign starting stats, you also paid trainers to buff specific stats and filled out your spell book with what you wanted to cast. You could also purchase alternate advancement skills that further change your specializations, and all of this combined to really make you feel like you were crafting a one-of-a-kind character. Both WoW and FF14 really missed this mark; WoW has only the barest of skill specialization by letting you choose from 3 different options every 5 levels, and you can always swap them around in sanctuaries. FF14 is even worse; I don’t think there are any choices to make, since the classes contain no skill branches and you can level up every class on the same character. There are certainly advantages to such a rigid system—the swappable classes are one of the main things I love about FF14—but it does lead to you feeling like you’re indistinguishable from every other (for example) Paladin at your same level. Not so in EverQuest.

I completed the tutorial quests (there were so many…but they each taught a different mechanic so I can’t fault the grind too badly) and got to killing monsters (in EverQuest, most leveling comes from farming mobs, since quests are fleeting and unreliable sources of XP) and discovered another mechanic I really liked; right-clicking on monsters gave you some flavor text describing your chances of success, from “looks like an easy fight” to “he appears to be quite formidable,” to “what do you want on your tombstone?” Unfortunately (and unsurprisingly), leveling-up takes a really, really long time. After several hours of play, I didn’t get close to level 9 where I’d get my first beast companion. Luckily, a random Steam review had suggested an alternative; on the test server you can boost your characters immediately to 25.

Since this necessitated creating a new character, I decided to explore the evil side of the spectrum. Unlike in WoW and FF14, EverQuest has a number of evil races and classes that automatically make most of the world hate you; most cities and NPCs will attack you on sight, and you generally get better racials/survival skills because you’re forced to setup camp in the wilderness a lot more. I decided to triple-up on being shunned by society and play a Dark Elf Necromancer naturist. (She wouldn’t be nudist for long; those monsters hit hard.) I also chose to skip the tutorial this time around, which let me immediately strike out into the wide open wilderness. 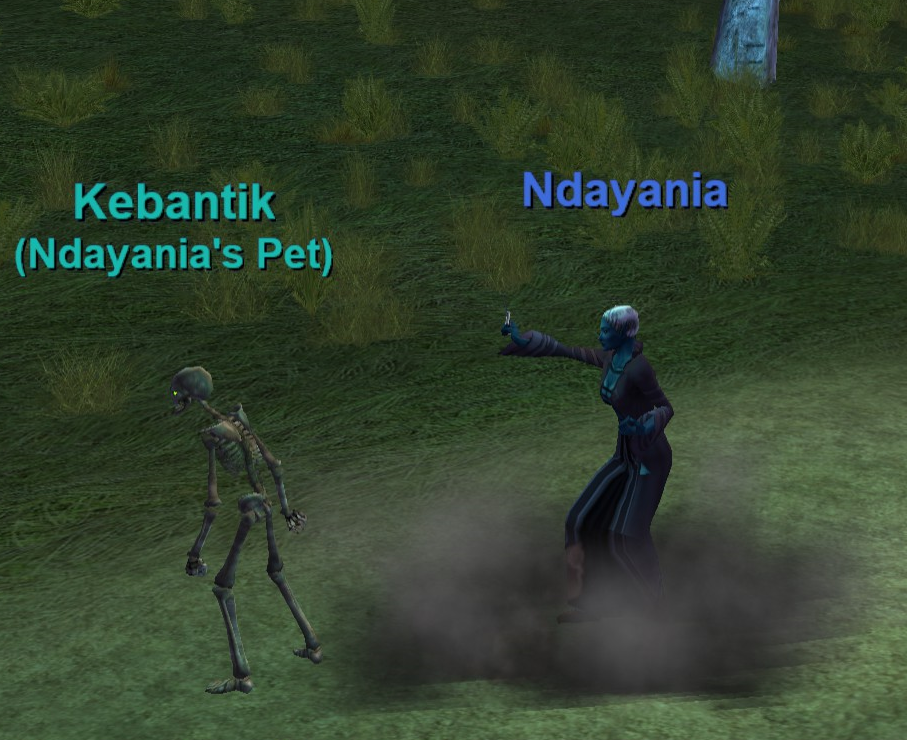 I immediately fell in love with the Necromancer’s summonable skeletons. They have procedurally-generated names! WoW kinda borrowed that concept with Warlock pets, but those are the same everytime they’re summoned. There’s a different sort of bonding that comes with named minions who you will never see again if they get killed. My first skeleton was Jontik, and no lie I would have done anything for that loyal little guy. Except he was a lvl 1 skeleton and he didn’t live very long once I’d reached the properly-leveled monsters for a lvl 25 character. After biting off more than I can chew, I rapidly learned a couple different things about EverQuest: (1) It blessedly lets you swap your equipped items even mid-combat unlike WoW and FF14, and (2) it really stings to die and de-level from where you were. I can see why WoW removed XP loss, but it certainly added a level of investment and care to whatever I did.

I guess I also learned (3), when you flee from a battle, the enemy mob never de-aggros and will happily chase you across the map until you can swap to a new zone. (Or trap its pathfinding with something like water). Sometimes this led to terrifying moments where I was organizing my inventory and some mofo I’d completely forgotten about ambled up and started smacking me upside the head.

But all in all, I was extremely surprised with how solid EverQuest‘s gameplay felt even from a 2020 perspective. Most of the things I liked in WoW were already here; pretty much the main thing WoW did right was adding a metric truckload of quality-of-life changes that streamlined (and beautified) menus while simplifying the level-up process. If I had gotten into MMOs before WoW was released, I can totally see myself having been addicted to this game instead.