Wow, we’ve hit 3,000 articles! I’m honestly blown away by how many people have decided to join us on what began as a simple repository for memorable SPUF threads. At this point, most of our readers have never even visited the original Steam Powered User Forums, which is a crazy thing to think. So since the majority of our readerbase wasn’t there for the early days, I thought I could join the congo-line of celebratory articles by chronicling the many iterations and events that the SPUFblog has experienced through the years.

This blog was originally born due to a discussion in a SPUF thread called “itsurblog“, where several users expressed a desire for somewhere to immortalize their favorite forum posts about TF2 mechanics and opinions. Our first url was spuf.blog.com, and the majority of our early articles were simply dolled-up forum posts with images and SEO tags applied. Our first guest article was written by Nethero about the Quick-Fix on August 23, 2013. The remaining articles were event announcements; the fourth-ever publication was a sign-up sheet for Demoknights vs. Demomen Season 2, and Huff became the first guest writer to run an event with a fanart challenge that awarded 29 Scotsman’s Stovepipes to the winners.

Our first migration came on September 7 2013, when I grew fed up with Blog.com’s spotty uptimes and migrated to WordPress under the new url Spufblog.com. Spufblog.com only existed for about two weeks before thesupremecmdr contacted me. He was a SPUF community ringleader who offered to migrate the blog into a planned “SPUFpowered Network” that would contain a TF2 server, a VoIP channel, and regular events. The migration to spuf.blog.info took place on September 19 2013, which remains the only day since our founding we didn’t publish an article.

Six days later, Medic writes her first two articles for the site, originally as a guest writer but she quickly grew to outpace even myself in delivering content and became the third staff member in addition to myself and thesupremecmdr. With the new SPUFpowered brand, events got bigger, bolder, and more frequent, sometimes even leaving Team Fortress 2 entirely and happening on other websites. On May 9th 2014 John Caveson created (and still maintains) our Steam group. On July 1st 2014, guest writer Dekky joined the team by starting the Phlogisticast, a SPUF podcast that ran for ten episodes and four months. Much longer-lived was The SPUF of Legend, our YouTube channel which premiered on February 6th 2016 and has been publishing pseudo-weekly ever since.

For about two weeks in late August/early September 2016, the blog went down at the same time as everything else hosted on SPUFpowered. We honestly never learned what happened, but Medic decided to take over hosting from thesupremecmdr, and as luck would have it she’d archived the blog mere hours before the shutdown occurred. We relaunched the blog at spuf.org, where it’s remained ever since!

Another person that deserves mention is Gen. DeGroot. When I first started publishing daily articles, my main bottleneck was a complete lack of artistic talent. The issue compounded whenever guest writers submitted articles without any pictures, forcing me to come up with my own. Thankfully, Gen. DeGroot stepped in and created the Loadout Picture Request Topic on SPUF, where the local GMod/SFM hobbyists would fill image requests for free, and it became a massive repository of images used frequently in the early blog years before the forum got killed. 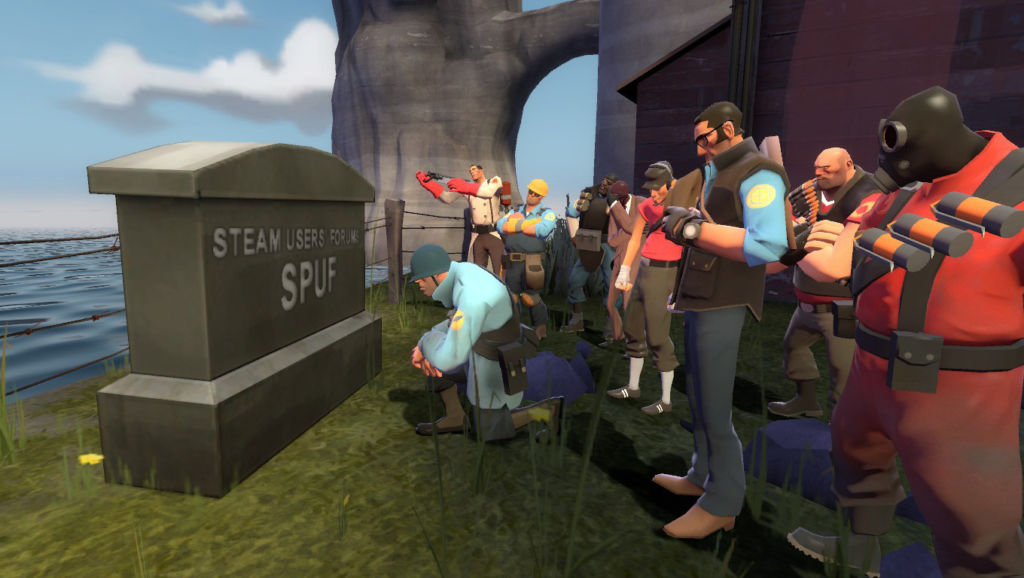 Yes, the next big milestone in SPUF history was an apocalyptic one. The Steam Powered User Forums disappeared without a trace one day, and Valve later admitted on June 5th 2017 that the shutdown would be permanent. While the community survived in various spinoff sites, like subSPUF, r/SPUF, and us here at the Daily, it was really the end of SPUF as a cohesive community and we’ve all just kinda done our own thing since. The last major milestone in SPUF history was Medic’s opening of the Discord server on October 24, 2017. It’s impossible to overstate how many things Medic has done for the site. You’ll notice that originally we had different people handling hosting, images, site design, and article-writing, whereas nowadays she does pretty much all of it.

As this article aptly shows, the Daily SPUF‘s longevity has been a community effort. So many people have stepped up and helped make the blog what it is, from the article submitters like Medicinal Warlock to the image creators to the event hosters, all the way down to those who stop by and read/watch/comment on what we publish. We’d never have made it this far if it weren’t for every single one of you. I’m super grateful for everyone who’s pitched in to help make SPUF what it is, and proud of what we’ve all created. So cheers to 3,000 articles, and here’s to 3,000 more!